Rains from Nicole douse eastern US from Georgia to Canada

Tropical Depression Nicole was moving through Georgia Friday morning after a day of causing havoc as it churned through Florida as a hurricane and then tropical storm.
Listen now to WTOP News WTOP.com | Alexa | Google Home | WTOP App | 103.5 FM
(1/16) 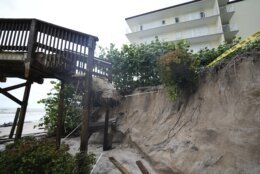 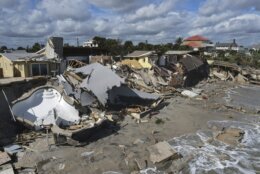 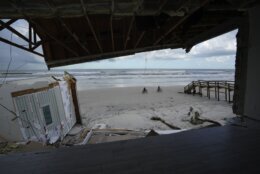 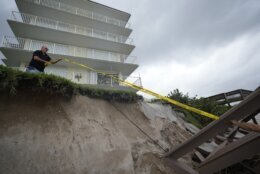 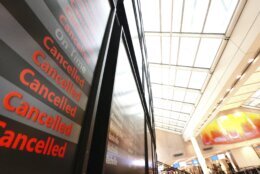 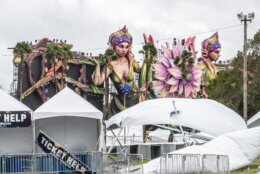 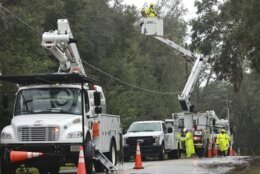 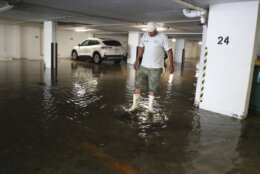 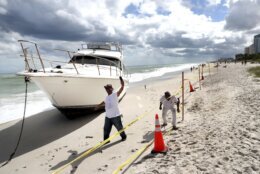 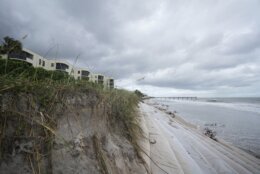 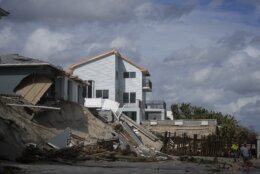 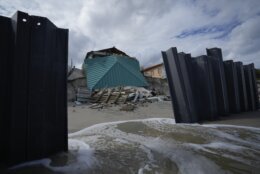 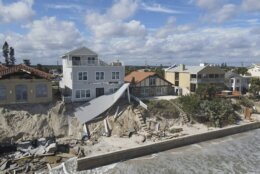 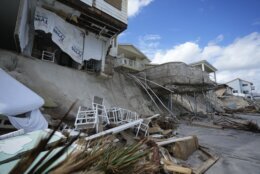 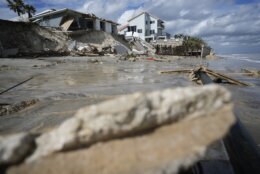 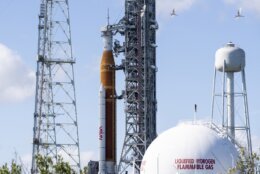 WILBUR-BY-THE-SEA, Fla. (AP) — Heavy rain from the remnants of Hurricane Nicole covered the eastern United States from Georgia to the Canadian border Friday while hundreds of people on a hard-hit stretch of Florida’s coast wondered when, or if, they could return to their homes.

As waves washed over pieces of lumber and concrete blocks that once were part of homes at Wilbur-by-the-Sea, workers tried to stabilize remaining sections of land with rocks and dirt. It was too late for some, though: The front of one house laid on the sand, where it was sheared away from the rest of the structure.

Parts of otherwise intact buildings hung over cliffs of sand created by pounding waves that covered the normally wide beach. Dozens of hotel and condominium towers as tall as 22 stories were declared uninhabitable in Daytona Beach Shores and New Smyrna Beach after seawater undercut their foundations. Just six weeks ago, Hurricane Ian caused an initial round of damage that contributed to problems from Nicole.

Retired health care worker Cindy Tyler, who lived in a seven-story condominium tower that was closed because of the storm, had a hard time coping with the idea of never being able to return to her building.

“I think right now I’m just in a state of hanging in there,” said Tyler, who was forced to evacuate with her husband and a few belongings. “I’m not believing I’m not going to be able to get back into my place. I’m trying to be very hopeful and very optimistic.”

Tenants in Tyler’s building spent $240,000 replacing a protective barrier that was battered by Ian, but the new fortification was no match for Nicole.

“It was known worldwide for driving on the beach,” said Leatherman, known as “Dr. Beach” for his annual ranking of U.S. beaches. “They don’t even have a beach to think about right now.”

As Nicole’s leftovers pushed northward, forecasters issued multiple tornado warnings in the Carolinas and Virginia, although no touchdowns were reported immediately. In south Georgia, Keith Post tried to clean up the damage at a coastal submarine museum that was submerged by floodwaters.

“At one point it was up to my knees,” said Post, whose St. Marys Submarine Museum sits on the river that forms the Georgia-Florida line at the Atlantic coast. “From the front of the museum looking across to Florida, you did not see any green. It was all water.”

Downgraded to a depression, Nicole could dump as much as 8 inches (20 centimeters) of rain over the Blue Ridge Mountains, forecasters said, and there was a chance of flash and urban flooding as far north as New England.

Wrecks added to Atlanta’s notoriously bad traffic as rain from Nicole fell across the metro area during rush hour, and a few school systems in mountainous north Georgia canceled classes.

The situation was a lot worse in eastern Florida. One roughly 15-mile (24-kilometer) long area of the coast was severely eroded, with multiple seawalls destroyed. Much of the destruction was blamed on unrepaired seawalls bashed during Ian, which killed more than 130 people and destroying thousands of homes.

Volusia County officials said it wasn’t clear when people might be able to sunbathe next to their cars and pickup trucks on the beaches again.

“Assessments have begun and will be ongoing as we have 47 miles of beach,” county spokesman David Hunt said.

Fewer than 15,000 homes and businesses were without power across Florida by late Friday afternoon, down from a high of more than 330,000. No major disruptions were reported up the Eastern Seaboard, according to a tracking website.

The late-season hurricane hit the Bahamas first, the first to do so since Category 5 Hurricane Dorian devastated the archipelago in 2019. For storm-weary Floridians, it was the first November hurricane to hit their shores since 1985 and only the third since record-keeping began in 1853.

Even minimal hurricanes and storms have become more destructive because seas are rising as the planet’s ice melts due to climate change, increasing coastal flooding, said Princeton University climate scientist Michael Oppenheimer. “It’s going to happen all across the world,’’ he said.

Attorney Josh Wagner, who lost much of his yard to erosion at his home in Ponce Inlet, was worried about the future.

″It obviously is concerning because growing up here my whole life, I’ve never seen the beach like this. This is the first time I’ve seen, like, this much catastrophe,” he said.

The lifting of a curfew at 7 a.m. Friday and the reopening of bridges leading to the beachfront enabled evacuated residents to return to the area to take stock of their properties, if only from the outside. But safety officials warned people not to approach the wreckage, which could collapse at any time.

“If you go anywhere near the beach, you are putting your life in jeopardy,” said Tamara Malphurs, deputy chief of the Volusia County Beach Safety Ocean Rescue, told The Associated Press.

A man and a woman were killed by electrocution Thursday when they touched downed power lines in the Orlando area, the Florida Medical Examiners Commission said. Also in Orange County, one man died in a vehicle crash, and a male pedestrian was struck and killed by a vehicle because of poor road conditions, medical examiners said. Another man died as waves battered his yacht against a dock in Cocoa, despite efforts to resuscitate him by paramedics who managed to get on board as the boat broke away from its moorings, Cocoa Police said.

For more AP coverage of our changing climate: https://apnews.com/hub/climate-and-environment