With the major search for victims over and a large swath of Florida’s southwest coast settling in for the long slog of recovering from its first direct hit from a major hurricane in a century, residents are bracing for what will be months, if not years, of work.
Listen now to WTOP News WTOP.com | Alexa | Google Home | WTOP App | 103.5 FM
(1/8) 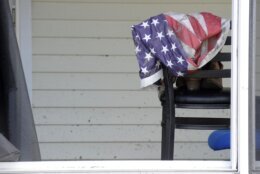 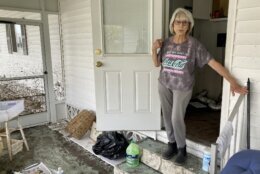 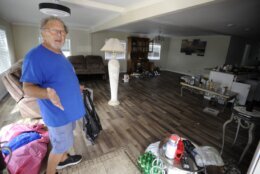 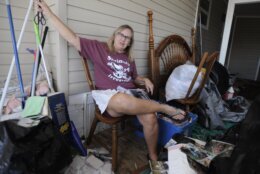 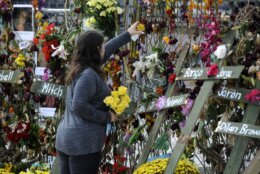 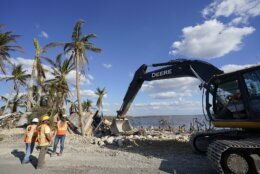 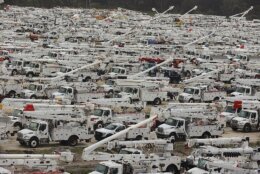 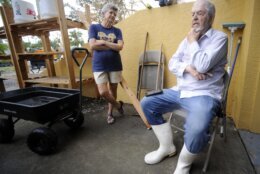 FORT MYERS, Fla. (AP) — An army of 42,000 utility workers has restored electricity to more than 2.5 million businesses and homes in Florida since Hurricane Ian’s onslaught, and Brenda Palmer’s place is among them. By the government’s count, she and her husband, Ralph, are part of a success story.

Yet turning on the lights in a wrecked mobile home that’s likely beyond repair and reeks of dried river mud and mold isn’t much solace to people who lost a lifetime of work in a few hours of wind, rain and rising seawater. Sorting through soggy old photos of her kids in the shaded ruins of her carport, Palmer couldn’t help but cry.

With the major search for victims over and a large swath of Florida’s southwest coast settling in for the long slog of recovering from a rare direct hit by a major hurricane, residents are bracing for what will be months, if not years, of work. Mourning lost heirlooms will be hard; so will fights with insurance companies and decisions about what to do next.

Around the corner from the Palmers in Coach Light Manor, a retirement community of 179 mobile homes that was flooded by two creeks and a canal, a sad realization hit Susan Colby sometime between the first time she saw her soggy home after Ian and Sunday, when she was picking through its remains.

State officials confirmed eight more deaths linked to the storm late Monday, bringing Florida’s toll to 102 — just over half of those in hardest-hit Lee County, where the powerful Category 4 hurricane came ashore with 155 mph (259 kph ) winds on Sept 28. Overall, 111 deaths have been blamed on the storm, also including five deaths in North Carolina, one in Virginia and three in Cuba.

It was the third-deadliest storm to hit the U.S. mainland this century behind Hurricane Katrina, which left about 1,400 people dead, and Hurricane Sandy, which killed 233 despite weakening to a tropical storm just before landfall.

At a makeshift memorial set up in a downtown park along the Caloosahatchee River, Holly Harmon got tearful Monday while placing yellow roses beside photos of people lost to the storm. She said it was the first time she had been able to visit because she had to wait for an inspector from the Federal Emergency Management Agency to assess damage to her home.

“My heart is just hurting for so many of the people we’ve known and grown with and everything they’ve lost,” said Harmon, 27.

While Gov. Ron DeSantis has heaped lavish praise on his administration for the early phases of the recovery, including getting running water and lights back on and erecting a temporary bridge to Pine Island, much more remains to be done. There are still mountains of debris to remove; it’s hard to find a road that isn’t lined with waterlogged carpet, ruined furniture, moldy mattresses and pieces of homes.

On the road to Estero Island, scene of the worst damage to Fort Myers Beach, workers are using heavy machines with huge grapples to snatch debris out of swampy areas and deposit it into trucks. Boats of all sizes, from dinghies to huge shrimpers and charter fishing vessels, block roads and sit atop buildings.

DeSantis said at least some of the roadmap for the coming months in southwest Florida may come from the Florida Panhandle, where Category 5 Hurricane Michael wiped out Mexico Beach and much of Panama City in 2018. Panama City leaders will be brought in to offer advice on the cleanup, DeSantis told a weekend news conference.

“They’re going to come down on the ground, they’re going to inspect, and then they’ve going to offer some advice to the local officials here in Lee County, Fort Myers Beach and other places,” DeSantis said. “You can do what you want. You don’t have to accept their advice. But I tell you that was a major, major effort.”

In a region full of retirees, many of whom moved South to get away from the chill of Northern winters, Luther Marth worries that it might be more difficult for some to recover from the psychological effects of Ian than the physical destruction. Two men in their 70s already have taken their own lives after seeing the destruction, officials said.

Fort Myers was sideswiped by Hurricane Irma in 2017, but Marth said that storm was nothing like Ian, and the emotional toll will be greater, especially for older folks.

“I’m 88 years old. People my age struggle,” said Marth, who counts himself and his wife, Jacqueline, among the lucky despite losing a car and thousands of dollars worth of fishing gear, tools and more when their garage filled with more than 5 feet (1.52 meters) of water.

“If you got wiped out financially, you don’t want to start over again. You don’t have the will to start again,” Marth said. “So those are the people my heart breaks for.”

Gaetz friend to be sentenced on sex crimes, other counts