PHILADELPHIA (AP) — A judge threw out murder and other charges Tuesday against a former Philadelphia police officer accused of fatally shooting a Black man in the back as he fled, ruling the instructions given to a grand jury were flawed.

Ryan Pownall, 40, had been facing a third-degree murder charge in the 2017 on-duty shooting of 30-year-old David Jones. Court records showed that charge as well as reckless endangering and weapons counts against Pownall were “quashed” Tuesday after a motions hearing before a Common Pleas Judge.

A message left with Pownall’s attorneys was not immediately returned.

The Philadelphia Inquirer reported that Judge Barbara A. McDermott said there were “so many things wrong” with how prosecutors instructed grand jurors before they considered the case. She granted a motion from Pownall’s attorneys to dismiss the charges.

Jane Roh, a spokeswoman for District Attorney Larry Krasner, said that ruling was made without prejudice, meaning the office “has several options” to move forward with the case.

“The District Attorney’s Office strongly disagrees on many levels with the court’s decision today in this matter, and will be reviewing our options in the coming days,” Roh said.

A trial in the case had been delayed multiple times, most recently after Krasner’s office sought a clarification from the State Supreme Court on the state law that governs when police shootings are considered justified.

Police said Pownall was transporting a victim to the special victims unit when he saw Jones riding a dirtbike on a city street. Jones’ bike had stalled and he pulled into the parking lot of a night club. Pownall also pulled into the lot, and when he frisked Jones, he said he felt a gun.

Police officials have said that Pownall tried to shoot Jones during the struggle, but that his gun jammed. Jones threw his gun down and fled, and Pownall fired at him, shooting him in the back and killing him. The grand jury that recommended charges said Jones was “no danger to anyone in his flight.”

Fraternal Order of Police Lodge 5 President John McNesby said the union looked forward to fighting to get Pownall reinstated as a Philadelphia officer. Pownall served on the force for 12 years prior to the shooting.

Then-Philadelphia Police Commissioner Richard Ross, said during a news conference announcing Pownall’s suspension that Pownall’s first attempt to shoot at Jones was justified under department policy. But Ross said additional shots fired from about 10 feet (3 meters) away — when Jones had clearly dropped the gun and had his back turned — were not.

The city agreed to pay Jones’ family $1 million in a settlement agreement in 2018.

According to police records, it was the second time Pownall was involved in an on-duty shooting where a suspect was struck in the back. Carnell Williams-Carney was paralyzed in 2010 after Pownall and a second officer fired shots at him as he fled, hitting him once in the back. A federal jury ruled in a lawsuit that Pownall and the other officer were justified in opening fire. 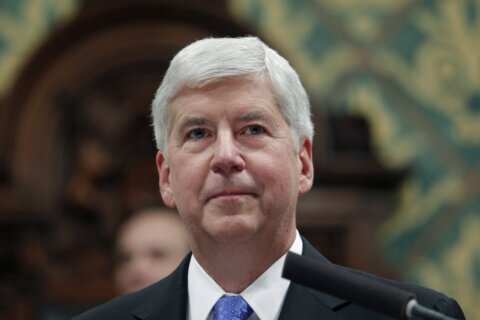