Frisch, a former city councilman from the posh, mostly liberal ski town of Aspen, instead called himself a “conservative businessman” and left his party affiliation unmentioned.

Downplaying that he’s a Democrat is a strategy Frisch’s campaign hopes will allow him to mount an upset victory in the largely rural and conservative-leaning Colorado congressional district where he’s taking on first-term Republican Lauren Boebert. She is one of several far-right figures — along with Georgia Rep. Marjorie Taylor Greene — who’ve become political celebrities since taking the country by storm in 2020.

Boebert is trying ensure voters don’t forget the uppercase “D” next to Frisch’s name, derisively dubbing her opponent “Aspen Adam” and following the GOP script of trying to paint to him as a typical liberal who would cow to what they say is Democratic House Speaker Nancy Pelosi’s “radical agenda.”

His strategy was on display during a recent town hall in the working-class town of Pueblo where Frisch wore a large belt buckle, jeans and cowboy boots. He touted what he described as “moderate” and “pragmatic” views that make him pro-business and pro-energy. He asked voters if they really wanted two more years of Boebert’s brand of what he calls “angertainment.”

“I think 40% of the Republican Party wants their party back,” he told the crowd.

Frisch hopes to lure Republican voters disillusioned by Boebert’s brash style and unabashed backing of former President Donald Trump. He doesn’t spend much time talking about Boebert’s stances on key district issues like oil and gas or health care, topics on which both candidates more or less agree.

A close race in rural Colorado would be a major development in the nationwide fight over the direction of the Republican Party, in which Trump-loyalists like Boebert, Greene and Florida Rep. Matt Gaetz are challenging an old guard that has mostly accommodated Trump while trying to keep the far right at arm’s length.

But Seth Masket, director of the Center on American Politics at the University of Denver, does not expect that to happen. Though some Republican voters disapprove of Boebert, it’ll be a big lift for them to cross party lines and support even a conservative Democrat, he said.

“It would be a pretty stunning thing if she did lose,” Masket said. “That might force a little bit of a recalibration as to what sort of candidates (the GOP) think they want.”

Boebert, who invigorated a loyal base of right-wing voters en route to her 2020 upset of five-term GOP Rep. Scott Tipton, isn’t buying Frisch’s conservative branding. To the incumbent, Frisch’s platform mirrors a trend of Democratic lawmakers and candidates backpedaling on issues such as the “defund the police” movement and grappling with sky-high inflation and steep prices.

“Adam’s priority is to act like a Republican because he knows he has no chance to win this election being the Pelosi-loving liberal that he is,” Boebert said.

She’s also not backing down from her firebrand ways that have earned her widespread notoriety, frequent national TV appearances and a spot on the so-called MAGA Squad.

When President Joe Biden was coming to the end of his State of the Union address in March, she interrupted a somber moment about Biden’s son to blame Biden for the 13 service members who were killed during the U.S. withdrawal in Afghanistan. “You put them in. Thirteen of them,” she yelled.

Boebert commonly rails against the Democratic establishment, invoking portentous rhetoric about liberal persecution of conservatives and a displacement of Americans by immigrants in the U.S. without permission. She warns that the direction of the country hangs in the balance in the midterms.

Republican Scott McInnis, a former district congressman and now a commissioner in Mesa County that includes Grand Junction, said that Republican voters like that Boebert’s a fighter.

“You got to be louder, you got to be tougher, and you got to be smarter than the people you are up against,” said McInnis. “People in this district like a scrapper. They like it; they like that energy.”

“What I’m hearing from long-term, mainstream Republicans: They are not happy with the new face of the party,” said Republican state Sen. Don Coram, who lost the June party primary to Boebert and has endorsed Frisch. “We would rather sacrifice a Republican than sacrifice the Republic.”

Coram added that mainstream Republicans are hoping that if Frisch unseats Boebert, they can replace him with a traditional Republican come the 2024 election.

Frisch avoids Boebert’s impassioned rhetoric about a larger cultural struggle, rarely mentions Boebert’s controversies that have thrust her onto the national stage, and speaks in less definitive language. When discussing broad concerns such as inflation, he’s nodded at his willingness to seek bipartisan solutions — “we need to find a way” — but avoided grandiose promises.

His platform tends to lean conservative, favoring the private sector to work out kinks in health care, promoting some natural gas and oil production in the district and the nation, and supporting the removal of Nancy Pelosi as speaker of the House in favor of “the next generation of leaders.”

In a recent interview, Frisch said bi-partisanship is the only path to “get stuff done.”

Whether Frisch will garner enough Republican votes, however, appears to be coming down to one question asked by an attendee at the town hall in Pueblo. The question, said Frisch, is one of the most common on the campaign trail: Does the adjective “Democratic” on his ticket mean he’ll bend to the party line?

“I’m not running to be the voice of any party,” he said. “We are making a pure competency pitch.” 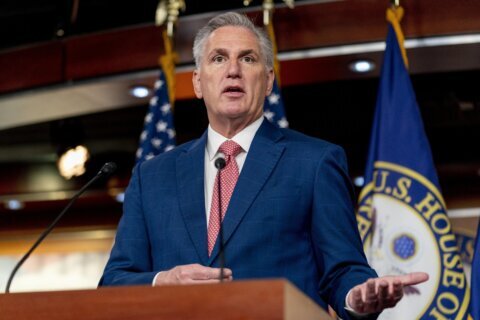