Pine Island, the largest barrier island off Florida’s Gulf Coast, has been largely cut off from the outside world. The pounding storm damaged the island's causeway, rendering its towns only accessible by boat or aircraft.
Listen now to WTOP News WTOP.com | Alexa | Google Home | WTOP App | 103.5 FM

ST. JAMES CITY, Fla. (AP) — Surrounded by Hurricane Ian’s destruction, many residents of one Florida island have stayed put for days without electricity or other resources while hoping the lone bridge to the mainland is repaired.

Pine Island, the largest barrier island off Florida’s Gulf Coast, has been largely cut off from the outside world. The pounding storm damaged the island’s causeway, rendering its towns only accessible by boat or aircraft.

“We feel as a community that if we leave the island — abandon it — nobody is going to take care of that problem of fixing our road in and out,” Pine Island resident Leslie Arias said as small motorboats delivered water and other necessities.

A temporary bridge to span the damaged parts of the causeway would be ready Wednesday afternoon, Florida Gov. Ron DeSantis said. It will aid in restoring electricity, delivering fuel and supplies, and reopening the island’s supermarket, he said. By Wednesday night, traffic was restricted to official vehicles only.

The governor spoke while visiting Matlacha, a community on its own small island astride the roughly 5-mile (8-kilometer) causeway. On Tuesday, an orange excavator could be seen scooping bucketfuls of earth into a wide gap where the island meets a cement bridge, apparently eroded by the storm. Nearby, part of a damaged building sagged into the water.

Piles of rubble and debris have replaced many of the Pine Island’s homes. Power lines and their wooden poles litter yards and roadways.

The 17-mile-long (27 km) island is bigger than Manhattan but is mostly rural and has no street lights or sandy beaches, according to the island’s civic association. It has about 9,000 year-round residents but the population doubles between Christmas and Easter.

Jay Pick, who has been on the island since May to help his in-laws, said winds from Ian blew the house’s roof off.

“We’re all safe, though,” Pick said Tuesday afternoon. “We’re blessed. Driving around seeing what some people have compared to what we have left, you get that survivor-guilt thing. I’m trying not to. I’m trying to be happy for what we do have left.”

A week after the Category 4 storm hit, the full breadth of the destruction across southwest Florida is still coming into focus. Utility workers pushed to restore power Wednesday, as crews searched for anyone still trapped inside flooded or damaged homes,

The number of storm-related deaths has risen to at least 98 in recent days, 89 of them in Florida. Among the new deaths reported Wednesday by medical examiners across the state were several drownings. One 82-year-old man died after evacuating without his medicine. In hardest-hit Lee County, Florida, the vast majority of people killed by the hurricane were over age 50.

Five people were also killed in North Carolina, three in Cuba and one in Virginia since Ian made landfall on the Caribbean island Sept. 27, a day before it reached Florida. After roaring northeast across Florida and into the Atlantic, the hurricane made another landfall in South Carolina before pushing into the mid-Atlantic states.

Biden toured some of Florida’s hurricane-ravaged areas on Wednesday, surveying damage by helicopter and then walking on foot alongside DeSantis. The Democratic president and Republican governor pledged to put political rivalries aside to help rebuild homes, businesses and lives.

Biden emphasized at a briefing with local officials that the effort will take months or years.

“The only thing I can assure you is that the federal government will be here until it’s finished,” Biden said.

Jeff Rioux, a general contractor in Fort Myers and a registered Republican, welcomed the president’s visit.

“The world does need to see what happened here,” Rioux said as he mopped up floors and tore out soaked drywall from his flooded house. “At some point you’ve got to put politics aside. People are hurting down here. It’s not right or left, it’s America at the end of the day.”

At a briefing earlier in the day, DeSantis made a point of praising the Federal Emergency Management Agency along with local and state governments, saying coordination has been exceptional.

“I will say, from local, state coordination and FEMA — there’s been less bureaucracy holding us back in this one than probably any one I’ve ever seen,” DeSantis said, referring to previous hurricanes.

The governor also said running water has been restored across much of the affected zone.

Lee County had been without running water since the hurricane passed over. But state Emergency Management Director Kevin Guthrie said Wednesday that all 13 of the county’s water treatment plants are pushing water into distribution.

Back on Pine Island, small motorboats have been the only way to bring in supplies since the storm hit. Arias, the resident who chose to stay, said Tuesday that many who remained are supporting each other.

“We have now gathered a lot of resources, not only donations but volunteers as well,” Arias said. “It’s a wonderful thing to see how the community has come together. In every end of the island … there is a family member or a neighbor helping that other neighbor.” 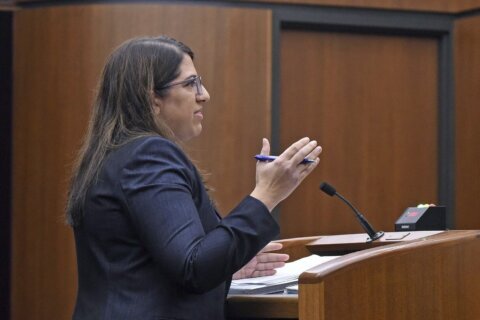 San Francisco may allow police to deploy robots that kill