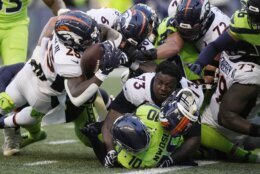 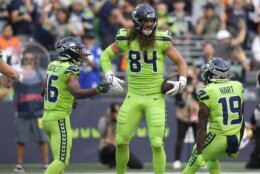 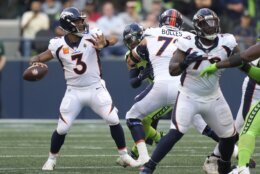 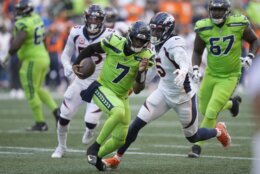 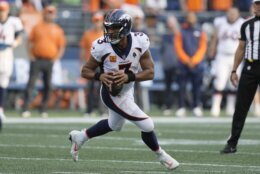 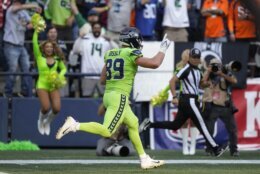 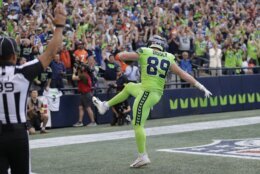 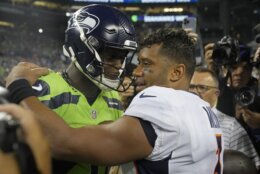 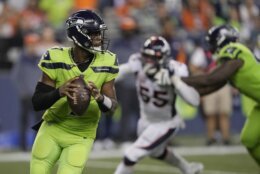 SEATTLE (AP) — It was a familiar scene in Seattle: Russell Wilson leading his team downfield for a game-winning score late in the fourth quarter.

This time, he wasn’t given a chance by his new coach in Denver, pulled off the field in exchange for a 64-yard field goal attempt that left plenty of confusion and the Seattle Seahawks celebrating an unexpected season-opening, 17-16 victory over the Broncos on Monday night.

With the Broncos facing fourth-and-5 in Seahawks territory with a minute remaining and all their timeouts, coach Nathaniel Hackett opted to let the clock run down to 20 seconds before sending out Brandon McManus to try the low-percentage kick.

“I don’t think it was the wrong decision. I think he could make it,” Wilson said after his return to the city where he played his first 10 seasons. “Obviously in hindsight, we didn’t make it, but if we were in that situation again, I wouldn’t doubt whatever he decided.”

Geno Smith threw two first-half touchdown passes as the Seahawks’ offense started brilliantly in the post-Wilson era. Denver had plenty of chances after halftime but fumbled twice at the 1-yard line.

Then came the final minute, which raised plenty of questions about Hackett’s clock management and decision-making in his debut as a head coach. NFL kickers are 2 for 35 on attempts of 64 yards or more since 1991, according to Sportradar, and McManus’ career long is 61 yards.

The kick missed wide left, and instead of Wilson leading the 36th career fourth-quarter or overtime comeback of his career, the Seahawks celebrated to chants of “Geno! Geno!”

“I was surprised that they took Russ out there,” Seattle coach Pete Carroll said.

Denver faced fourth-and-5 at the Seattle 46 after Wilson hit Javonte Williams for a 9-yard gain. McManus said that was the exact spot on the field the offense needed to reach to give him a shot at the kick.

“I wish we would have gotten a lot closer, but it put us in that weird spot there because we were in field-goal range, but we were on that fourth-down situation,” Hackett said. “I didn’t think we were gonna get that many yards. … We just made our decision and wanted to take our shot there.”

Hackett then used his timeouts while the Seahawks kneeled down, elongating the Seattle celebration.

Smith and the Seahawks did very little offensively in the second half but their first half was good enough. Smith threw a touchdown pass of 38 yards to Will Dissly on the first possession of the season and hit Colby Parkinson for a 25-yard touchdown in the second quarter.

“For him to go out there and get a win like that shows the confidence we have in him,” Seattle wide receiver DK Metcalf said.

Wilson was 29 of 42 for 340 yards and a touchdown. But Denver couldn’t overcome its red-zone inefficiency with both Melvin Gordon III and Williams fumbling on plays snapped at Seattle 1-yard line.

“We can run the ball. We can pass the ball. We just have to be sound in the red zone. That’s been our issue,” Gordon said.

The Seahawks moved into first place in the NFC West after Arizona, San Francisco and the Los Angeles Rams all lost on Sunday.

Wilson went from being a disputed third-round pick to a franchise cornerstone that helped Seattle to its only Super Bowl title. But his departure this past offseason in a trade to Denver was a messy conclusion to a mostly sparkling career with the Seahawks.

And Seattle fans were ready to let Wilson find out just what it was like to be an opposing QB at the stadium where he enjoyed so many triumphs.

“Just going out there and seeing him in a Broncos jersey was shocking to me,” Metcalf said.

Wilson was greeted with lustful, guttural boos every time he stepped on the field from a crowd notorious for making noise. They started in pregame warmups and didn’t decrease in volume throughout the victory.

Some signs in the stadium compared Wilson to Alex Rodriguez, who infamously left for a massive contract in Texas early in his baseball career. Others switched around the words from a catchphrase during his time in Seattle, urging the Seahawks, “Let’s Cook Russ.”

“Tonight was special, just on the other side than I’m used to. But it was still a special environment in a place that I’ve always loved,” Wilson said.

Wilson and the Broncos had plenty of chances to silence the crowd.

Denver ran eight plays inside the Seattle 12 in the third quarter and came away with zero points after the two fumbles.

The Broncos had three more plays inside the Seattle 10 midway through the fourth quarter and still couldn’t find the end zone. Denver reached the 3-yard-line but its third false start of the game moved Wilson back to the 8 and he was incomplete on his next two throws. McManus’ 26-yard field goal with 6:13 left pulled the Broncos within 17-16.

Seattle safety Jamal Adams suffered what Carroll said after the game was a serious injury to his left quadriceps tendon. Adams limped off the field after nearly sacking Wilson in the first quarter and eventually was driven away on a cart.

Seahawks: At San Francisco on Sunday.

Live Updates: Strong winds in SC ahead of Hurricane Ian