After the 2020 election, a Georgia poll worker who was falsely accused of voting fraud by former President Donald Trump was pressured and threatened with imprisonment during a meeting arranged with the help of an ally of the Trump campaign, a prosecutor said in a court filing Friday.
Listen now to WTOP News WTOP.com | Alexa | Google Home | WTOP App | 103.5 FM

ATLANTA (AP) — After the 2020 election, a Georgia poll worker who was falsely accused of voting fraud by former President Donald Trump was pressured and threatened with imprisonment during a meeting arranged with the help of an ally of the Trump campaign, a prosecutor said in a court filing Friday.

Fulton County District Attorney Fani Willis is investigating whether Trump and others illegally tried to influence the 2020 election in Georgia. As part of the probe, Willis filed court documents on Friday seeking testimony from Willie Lewis Floyd, a director of Black Voices for Trump, a group aimed at increasing the former president’s support among Black voters.

In December 2021, Floyd was asked to arrange a meeting to discuss an “immunity deal” with Ruby Freeman, a Fulton County election worker whom Trump and his allies falsely accused of pulling fraudulent ballots from a suitcase, according to Willis.

Willis said Floyd arranged for Trevian Kutti — whom Willis described as a “purported publicist” based in Chicago — to meet with Freeman. The prosecutor has previously sought Kutti’s testimony.

Kutti told Freeman that “an armed squad” of federal officers would approach her and her family within 48 hours and that Kutti had access to “very high-profile people that can make particular things happen in order to defend yourself and your family,” according to Willis’ court filing.

The district attorney cited video footage as evidence of those statements.

Freeman and Kutti met at the Cobb County Police Department, where Kutti told Freeman that “freedom and the freedom of one or more of your family members” would be disrupted if Freeman declined her assistance. Kutti said Freeman was “a loose end for a party that needs to tidy up,” according to Willis.

The meeting was captured in part by a body camera, Willis said.

Kutti also said she wanted to connect Freeman to Floyd, whom she described as a “Black progressive crisis manager, very high level, with authoritative powers to get you protection that you need,” Willis said.

During a subsequent phone call with Kutti and Floyd, Freeman was pressured to reveal information under threat of imprisonment, Willis said.

Freeman and her daughter, Wandrea “Shaye” Moss, appeared in June before the House Jan. 6 committee and have told lawmakers how the lies about election fraud upended their lives. Moss was also a poll worker in Fulton County.

Willis has sought testimony from numerous witnesses with ties to Trump as part of her investigation, including former New York City Mayor Rudy Giuliani and U.S. Sen. Lindsey Graham. Giuliani, who’s been told he’s a target of the investigation, testified before the special grand jury last month. A federal judge on Thursday ruled that constitutional protections don’t shield Graham from testifying.

Trump has blamed voter fraud for his 2020 loss to Democrat Joe Biden. State officials and federal investigators, including Trump’s own attorney general, have said there was no evidence of widespread fraud in the 2020 contest. 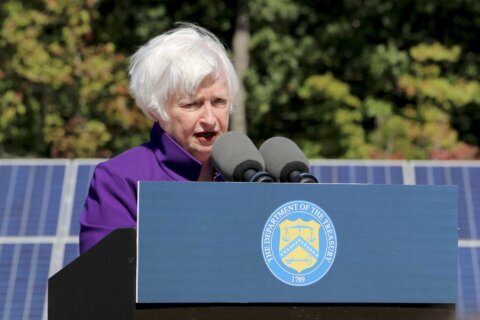 Yellen warns inaction on climate could cause economic crisis