JACKSON, Miss. (AP) — The head of the U.S. Environmental Protection Agency said Wednesday that he wants Mississippi’s capital city to receive “its fair share” of federal money to repair a troubled water system that left homes and businesses without running water for several days.

Even with water flowing from taps and people again able to flush toilets this week, Jackson lacks safe drinking water. The city of 150,000 is in the sixth week of a boil-water advisory from the state health department because of concerns that low pressure could allow contaminants into the water.

EPA Administrator Michael Regan was in Jackson to meet with residents and state and local elected officials Wednesday. He touted the $1 trillion federal infrastructure law that President Joe Biden signed in November.

Mississippi is set to receive more than $4 billion from the law, with most of the money designated for highways and bridges, the White House said. The state’s allocation includes $429 million over five years to improve water systems.

Jackson’s main water-treatment plant malfunctioned in late August after torrential rain caused flooding along the Pearl River. The influx altered the quality of the raw water entering the plant from a reservoir. That slowed the treatment process, depleted supplies in water tanks and caused a dangerous drop in pressure.

But even before the rainfall, officials said some water pumps had failed and a treatment plant was using backup pumps. A rental pump was installed last week, and the system’s water pressure is back to normal.

Groups are distributing bottled water at drive-thru sites, and restaurants are bringing tanks of clean water from suburbs.

About 25% of Jackson’s residents live in poverty, and the city’s tax base has declined with a sharp decrease in population since 1980 — a change that happened along with mostly white flight that started about a decade after public schools began integrating in 1970.

Democratic Rep. Bennie Thompson sat with Regan at the community meeting and toured Jackson’s main water plant with the administrator, Gov. Tate Reeves and Jackson Mayor Chokwe Antar Lumumba. Other members of Mississippi’s congressional delegation also participated in meetings with them about short-term and long-term solutions for the city’s water problems.

“We do know that will require all of us working together to cut through the bureaucracy,” Regan said during a news conference at Jackson State University.

Thompson pointed out during the community meeting that Regan is from North Carolina, which also has a large Black population.

“He understands the challenges, especially (for) communities of color,” said Thompson, the only Black member of Mississippi’s congressional delegation. “Under this current administration, they have taken the fact that many of these communities have been underserved by its government and tried to right the ship.”

Jackson’s water system has been fragile for years, with officials warning that widespread loss of service was possible. A cold snap in 2021 froze pipes and some water treatment equipment, leaving tens of thousands of people without running water. Similar problems happened again early this year, on a smaller scale. The EPA also told Jackson months ago that its water system violates the federal Safe Drinking Water Act. 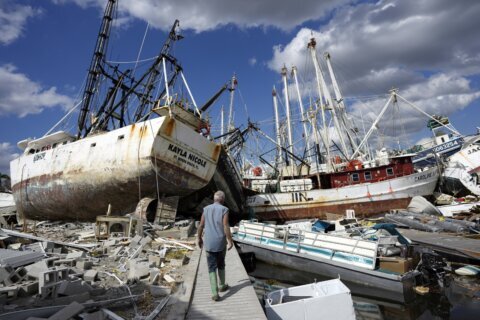