LOS ANGELES (AP) — St. Louis Cardinals slugger Albert Pujols hit his 700th home run on Friday night, connecting for his second drive of the game against the Los Angeles Dodgers and becoming the fourth player to reach the milestone in major league history.

With the drive in the final days of his last big league season, the 42-year-old Pujols joined Barry Bonds (762 homers), Hank Aaron (755) and Babe Ruth (714) in one of baseball’s most exclusive clubs.

A man wearing a blue Dodgers shirt with Hideo Nomo’s No. 16 on the back snagged the 700th homer ball. He was whisked under the stands as he clutched a black glove containing the historic souvenir ball to his chest. Prolonged negotiations went on before the man was escorted out of Dodger Stadium flanked by 10 security personnel and into a waiting SUV.

Showing the pop from his younger, dominant days, the 42-year-old Pujols hit No. 699 in the third inning, then launched No. 700 in the fourth.

A 37-year-old Los Angeles man, Cesar Soriano, snagged No. 699. He turned the ball over to security after being told he could meet Pujols.

It’s been a remarkable and resurgent run for Pujols. This was his 14th home run since the start of August for the NL Central-leading Cardinals, and his 21st of the season.

Fairly recently, many considered him a long shot to reach 700 this season. He went into August batting only .235 with just seven home runs.

But with two long shots on this evening, he made his mark.

Pujols’ historic homer was a three-run shot against Dodgers reliever Phil Bickford. The ball landed in the first couple rows of the left-field pavilion, the same location his two-run shot touched down the previous inning off left-hander Andrew Heaney.

He jogged around the bases smiling all the way. After crossing the plate and pointing his fingers skyward, Pujols went over to greet fellow Dominican and former Dodgers star Adrian Beltre. They high-fived through the protective netting.

Then he was off to the Cardinals dugout, getting hugs and congratulations every step of the way.

Pujols received a prolonged standing ovation from the crowd — he finished out last season while playing for the Dodgers. He took a curtain call, raising his cap in acknowledgment.

The crowd of 50,041 chanted “Pujols! Pujols!” They finally sat down after being on their feet in anticipation of seeing history.

His 700th homer gave him a couple of other nice, round numbers, too — he has hit 500 home runs off right-handers and 200 off lefties.

Pujols connected twice on the same night New York Yankees slugger Aaron Judge remained on deck for home run history. He remained at 60 homers, just short of tying Roger Maris’ AL mark of 61 in 1961, in a win at Yankee Stadium.

Pujols’ two bops gave the Cardinals a 5-0 lead, with all the runs coming courtesy of his big bat.

The Cardinals extended their lead to 8-0 in the fifth on Dylan Carlson’s RBI double and Lars Nootbaar’s two-run homer. They added two more runs in the seventh on Juan Yepez’s solo shot and Nootbaar’s RBI single.

Pujols struck out swinging in his first at-bat against Heaney and grounded out to short in the sixth. He was replaced in the eighth by pinch-hitter Alec Burleson, who homered.

Pujols snapped a tie with Alex Rodriguez for fourth on the career list when he hit career homer No. 697 against Pittsburgh on Sept. 11.

The three-time NL MVP was batting .189 on July 4. But he started to find his stroke in August, swatting seven homers in one 10-game stretch that helped St. Louis pull away in the division race.

“I know that early in the year … I obviously wanted better results,” Pujols said after he homered in a 1-0 victory over the Chicago Cubs on Aug. 22. “But I felt like I was hitting the ball hard. Sometimes this game is going to take more away from you than the game (is) giving you back.

“So I think at the end of the day you have to be positive and just stay focused and trust your work. That’s something that I’ve done all the time.”

Pujols has enjoyed a productive season after returning to St. Louis in March for a $2.5 million, one-year contract. It’s his highest total since he hit 23 homers for the Angels in 2019.

He plans to retire when the season ends.

Pujols also began his career in St. Louis. He was selected by the Cardinals in the 13th round of the 1999 amateur draft and won the 2001 NL Rookie of the Year award.

The Dodgers honored Cardinals teammates Pujols and catcher Yadier Molina, both of whom are retiring at season’s end.

The players were greeted by a standing ovation when they strode to home plate before the game. Their career highlights were shown on the stadium’s big screens.

Both players were presented with white golf bags before Pujols took the mic and thanked his former teammates and fans for treating him well during his lone season in LA last year.

Cardinals: LHP Jordan Montgomery (8-5, 3.26 ERA) makes his second road start with the team since coming from the Yankees. He tossed a one-hit shutout in his other one against the Chicago Cubs on Aug. 22 in a 1-0 victory. 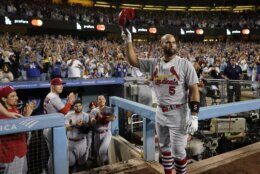 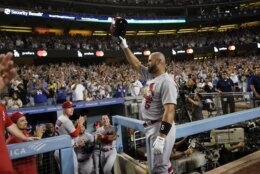 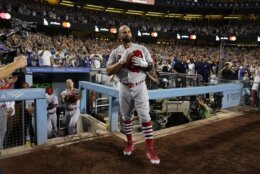 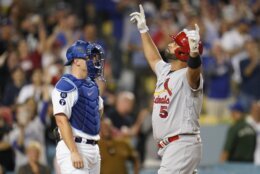 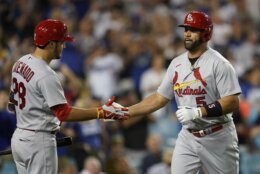 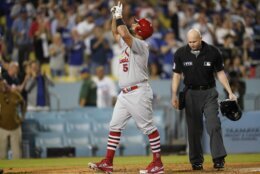 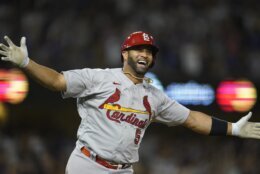 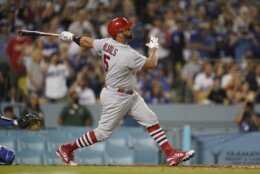 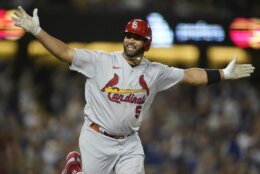 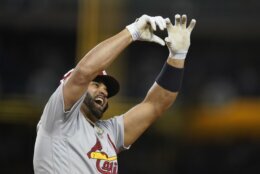 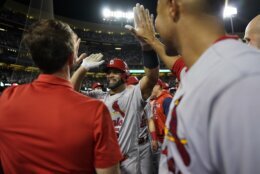 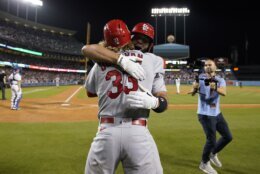 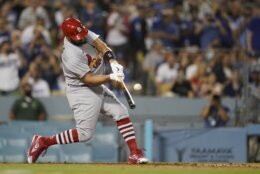