The new laws include proposals aimed at reducing exposure to gas and oil pollution in communities of color, expanding clean energy jobs and accelerating the state’s timeline for getting most of its electricity from renewable energy sources. Newsom signed them following a record-breaking heat wave that forced California to rely more heavily on natural gas for its electricity production.

“We could talk about the way the world should be and protest it,” Newsom said while standing underneath an array of solar panels. “Or we can actually make demonstrable progress.”

State Sen. Lena Gonzalez, a Democrat, was an author of one bill aimed at protecting vulnerable communities from pollution coming from oil and gas production sites. It bans the drilling of any new oil and gas wells with 3,200 feet (975 meters) of homes, schools and other neighborhood sites and requires wells in those zones to enact stricter safety measures. Neighborhood oil drilling is prominent around Los Angeles and oil-rich parts of the Central Valley.

“The reason why we do this, first and foremost, is because some of us are parents,” said Gonzalez, who represents the southern part of Los Angeles County.

Another bill Newsom signed requires California to reach carbon neutrality by 2045, meaning it will remove as much carbon from the atmosphere as what it emits.

The state’s accelerated carbon reduction targets are a “big win for California,” Kassie Siegel, of the Center for Biological Diversity Action Fund, said in a statement.

The oil industry has broadly criticized Newsom’s climate package, saying it will harm an industry that still provides many jobs throughout the state. California is the seventh-largest oil producing state.

Some environmental groups were critical as well, though for different reasons. Food and Water Watch California, a nonprofit aimed at addressing climate and water issues, opposed a bill in the package that creates a permitting system for carbon capture projects. Such efforts rely on technology to remove carbon from the atmosphere to store underground.

Critics of the technology say it’s dangerous, unproven and a means for oil companies to keep emitting.

“Carbon capture is a smokescreen for fossil fuel industry players to protect their bottom lines at the expense of our climate and communities,” Food and Water Watch California Director Chirag G. Bhakta said in a statement.

Newsom, a Democrat, also took the opportunity to swipe at Republican political leaders in Texas. He compared California’s energy production to that of Texas, another major producer, where a winter storm in February 2021 left millions without power.

“And they’re talking to us about keeping our lights on?” Newsom said of Texas.

Sophie Austin is a corps member for the Associated Press/Report for America Statehouse News Initiative. Report for America is a nonprofit national service program that places journalists in local newsrooms to report on undercovered issues. Follow her on Twitter at https://twitter.com/sophieadanna. 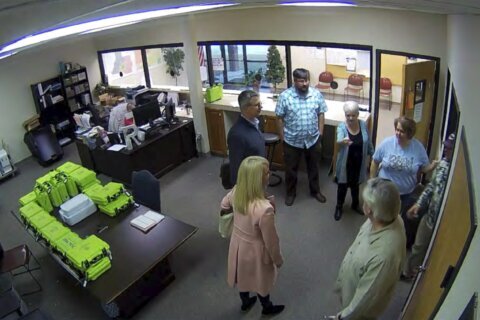