NEW ORLEANS (AP) — A judge’s order that forced the Biden administration to resume sales of oil and gas leases on federal land and waters was vacated Wednesday by a federal appeals court in New Orleans.

It was at least a temporary victory for President Joe Biden but the immediate effect was unclear.

The much-heralded climate bill that Biden signed into law Tuesday provides for new drilling opportunities, in a compromise among Democrats, and mandates that several lease sales be held over the next year in the Gulf of Mexico and Alaska.

Biden had signed an executive order that suspended new lease sales soon after taking office in 2021. The following March, U.S. District Judge Terry Doughty in Monroe, Louisiana, blocked the policy, siding with a more than a dozen Republican-leaning states opposed to Biden’s move.

The appeals court in New Orleans on Wednesday said the judge’s reasons were unclear and sent the case back to him.

“We cannot reach the merits of the Government’s challenge when we cannot ascertain from the record what conduct — an unwritten agency policy, a written policy outside of the Executive Order, or the Executive Order itself — is enjoined,” Judge Patrick Higginbotham wrote for a panel that also included judges James Dennis and James Graves.

Department of the Interior officials were reviewing the decision, spokesperson Melissa Schwartz said. She declined to say whether the climate law made the issue moot.

The practical impacts of the ruling could be minor because of the fossil fuel leasing mandates in the climate law, said Erik Milito, president of the National Ocean Industries Association, which represents oil and gas companies.

The law requires the government to reinstate $192 million in leases in the Gulf of Mexico that were blocked by another court ruling last year. And it requires two more sales in the Gulf and one in Alaska before October 2023. Those sales had been canceled under Biden. The provision reviving them was inserted into the law at the insistence of West Virginia Democratic Sen. Joe Manchin, an advocate for fossil fuels.

Going forward the law says Interior will hold periodic oil and gas lease sales and offer at least 60 million acres (24 million hectares) of offshore parcels and 2 million acres (810,000 hectares) onshore during the prior year before it can approve any renewable energy leases.

“Offshore oil and gas leasing has been protected and will proceed,” said Milito.

Environmentalists remained hopeful that the ruling would prompt the administration to move forward with other changes to the oil and gas leasing program, such as limits on future development including where leasing occurs.

“They may not be able to deliver a full moratorium on leasing, but at least they can exercise more restraint than they could with the injunction in place,” said Jeremy Nichols with the environmental group WildEarth Guardians. “All eyes are going to be on the Interior Department to see what their next move might be.”

Following last year’s injunction from Doughty that forced lease sales to resume, the Biden administration auctioned off more than 2,700 square miles (6,950 square kilometers) of leases in the Gulf of Mexico in November. The sale was later overturned by a federal judge in Washington D.C., who said the government had failed to adequately consider climate change impacts from burning oil and gas from the Gulf.

In June, the administration sold leases on about 110 square miles (285 square kilometers) of federal land, mostly in Wyoming, despite concluding that future emissions from the parcels offered could cause billions of dollars in damages due to climate change impacts. Legal challenges of those sales by environmentalists are pending. 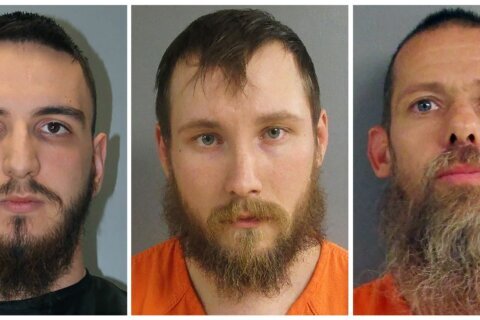