MILWAUKEE (AP) — Facing critical races for governor and U.S. Senate, Democratic hopefuls in Wisconsin are hoping that their support for abortion rights in the face of a Supreme Court ruling that overturned Roe v. Wade can overcome the headwinds of a midterm election long expected to favor Republicans. But there’s one key group their strategies might fail to mobilize: Black voters.

An issue with strong support from white Democrats is more complicated in the Black community, especially among churchgoers who hold more conservative views on abortion. The topic is so fraught that most community organizers avoid bringing it up.

“Among the Black Baptist church alone, that would split us in half,” said David Liners, executive director of WISDOM, a faith-based organizing group with a statewide presence, when asked why his group isn’t organizing around abortion. Karen Royster, spokeswoman for Milwaukee-based Souls to the Polls, called abortion “taboo” in church circles, making it difficult for faith leaders to do any sort of work around it.

Other groups, like Black Leaders Organizing Communities, “won’t proactively bring up the issue” while doing voter outreach, but will discuss it if it comes up, said Angela Lang, BLOC’s executive director.

It’s an issue bound to get even more focus after a decisive statewide vote in heavily Republican Kansas last week in favor of protecting abortion access, buoying Democratic hopes the issue could galvanize voters elsewhere.

AP VoteCast shows that overall, Black voters in the 2020 presidential election were more likely than white or Hispanic voters to say abortion should usually be legal. But among those identifying with or leaning toward the Democratic Party, things looked different: White Democrats were more likely than either Black or Hispanic Democrats to say abortion should be legal in most or all cases, 88% to 77% to 76%.

Valerie Langston, a 64-year-old Milwaukee woman who is Black, backs Democrats and supports abortion rights. She said she’s afraid to bring up the issue with friends because she has occasionally been surprised to learn that some of them are anti-abortion.

“They’re still going to vote Democrat even if they don’t agree with abortion,” she said.

Democratic Gov. Tony Evers, who won election four years ago by just over 1 percentage point, said he isn’t worried about voter enthusiasm. He has noted that he has vetoed nine bills from the Republican-controlled Legislature that would have restricted abortion access. At a news conference, he projected confidence that the issue will carry him to reelection.

“I don’t think there’s going to be any trouble,” Evers said when asked if he thought voters with varied views on abortion might not be motivated to support him.

Doctors in Wisconsin have stopped providing abortions after the Supreme Court’s ruling due to an 1849 ban that Republican lawmakers have said they want to update. Anti-abortion groups have said they’ll work to clarify the law to defend against challenges.

State Sen. La Tonya Johnson, a Black Democrat who represents a majority-Black district in Milwaukee, noted many voters are focused on economic concerns. She said she hasn’t seen groups going door-to-door to talk about abortion rights, even though Black women are more likely than any other group to obtain an abortion, according to data from the Centers for Disease Control and Prevention.

The Wisconsin Democratic Party’s engagement teams that work directly with voters of color year-round prefer to take conversations where voters lead them, spokeswoman Iris Riis said. When it comes to abortion, “It’s not the only thing we’re talking to voters about, but we are talking about it,” she said.

Shakya Cherry-Donaldson, executive director of 1000 Women Strong, a national political organizing group focused on issues that matter to Black women, favors a more direct approach. The key is to focus on the idea that “we have to have autonomy from the state,” she said — a message that resonates enough with a historically marginalized community to overcome personal and religious views on the morality of abortion.

“The framing of our messaging is that we cannot go back, only forward. Civil rights were won for all of us,” Cherry-Donaldson said.

But her group is not in Wisconsin this year, focusing its efforts in seven other states where they were able to staff and fund their work.

Paru Shah, a political science professor at the University of Wisconsin-Milwaukee whose work focuses on race, ethnicity and politics, said Democrats would do well to make sure they are messaging on issues like crime and voting rights rather than focus on one particular issue like abortion.

“There isn’t a lot of single-issue voting happening among Democrats in general, but especially among Black women who have kind of been the backbone of Democratic turnout for at least the last 10 years,” said Shah.

The GOP’s strategy and messaging to reach Black voters on abortion will be the same in the midterm as it’s been for decades.

“What we will do is explain the inordinate – I would say even lopsided – access to abortion that’s being pushed on African American women,” said Gerard Randall, chair of the Wisconsin Republican Party’s African American Council.

“They will hear certainly from the pulpits in many of their churches a similar message of restraint when it comes to accessing abortions,” he said.

Still, Wisconsin Democrats see the issue as key to winning both the governor’s race and the U.S. Senate race this fall.

Polling by The Associated Press-NORC Center for Public Affairs Research has found most people in the United States want Congress to pass legislation guaranteeing access to legal abortion nationwide and that overwhelming majorities also think states should allow abortion in specific cases, including for a woman’s health and for rape.

The Democratic front-runner in Wisconsin’s Senate race, Lt. Gov. Mandela Barnes, who is Black, emphasizes abortion access as a civil right. In his latest television ad, Barnes, who grew up in Milwaukee, and his mother talk about her decision to end a complicated pregnancy. LaJuan Barnes highlights that she was able to choose: “It was my decision, not some politicians’.”

Harm Venhuizen is a corps member for the Associated Press/Report for America Statehouse News Initiative. Report for America is a nonprofit national service program that places journalists in local newsrooms to report on undercovered issues. Follow Harm on Twitter. 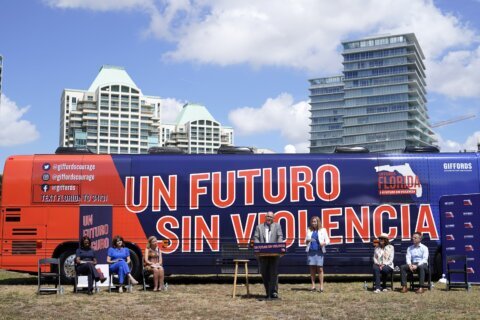