DENVER (AP) — Forcibly administering anti-psychotic medication to a man charged with killing three people and wounding eight others in a 2015 attack on a Colorado Planned Parenthood clinic probably will not make him well enough to stand trial and could also harm his health, a defense expert said Wednesday.

Dr. George Woods Jr., a California physician specializing in neuropsychiatry, testified during a hearing in federal court to determine whether Robert Dear, 64, who has been diagnosed with delusional disorder, could be injected with the drugs while restrained — either by handcuffs if he agrees to them or by a team of six prison guards.

While a psychiatrist and a psychologist who evaluated Dear at the federal prison hospital in Springfield, Missouri, testified Tuesday that there was a substantial likelihood he would be made well enough to be able to work with his lawyers, Woods disagreed. He said research shows the drugs are less effective in treating the disorder in older patients like Dear. He also said the drugs could also exacerbate Dear’s existing health problems like high blood pressure and lead to him to develop vascular dementia, brain damage caused by strokes.

He said the plan from a prison psychiatrist to medicate Dear did not take into account the complexity of Dear’s case.

“It’s a standard template that doesn’t speak to the specific person Mr. Dear is,” said Woods.

However, a cardiologist who works with psychiatrists to prevent patients with heart conditions from being harmed by anti-psychotic medication at Denver Health, the city’s public hospital, testified Dear’s health conditions are not very unusual, noting that about half of adults in the United States have high blood pressure. If left untreated like Dear’s, Dr. Matthew Richard Holland acknowledged it can lead to congenital heart failure, strokes and kidney dysfunction.

Still, Holland said he doubted he would have been asked to consult on Dear’s case if he were a patient at his hospital.

According to his medical records, Dear reported having a heart attack but neither Holland nor Dr. Robert Sarrazin, the chief of psychiatry at the Springfield prison hospital, said they could find anything else in the records to back up that claim.

On Wednesday, Blackburn said he initially tried to give Dear some leeway, assuming that his comments were related to his mental illness but said he now believes they are the result of “selfish, childish and disaffected arrogance.” Blackburn said Dear’s departing comments were the final straw and warned Dear he would immediately be removed if he continued to speak out during the proceedings

Dear, who was dressed in a khaki t-shirt and pants and not wearing any handcuffs, did not appear to react and looked down toward the defense table after testimony resumed following the warning. He did not say anything. 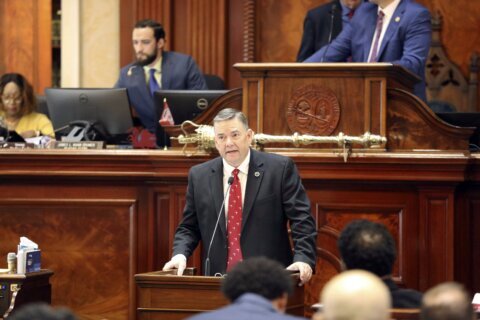