Dire consequences could result if states, cities and farms across the American West cannot agree on how to cut the amount of water they draw from the Colorado River.
Listen now to WTOP News WTOP.com | Alexa | Google Home | WTOP App | 103.5 FM
(1/12) 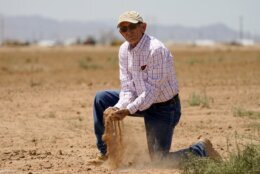 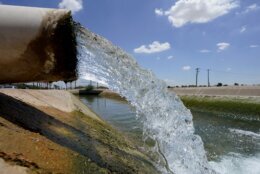 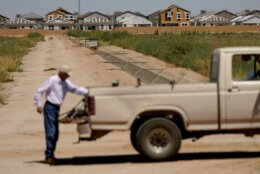 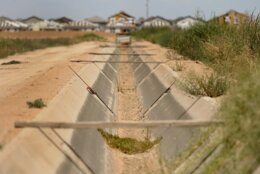 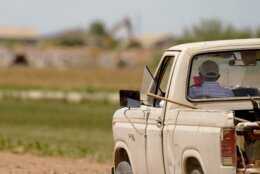 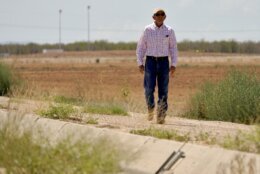 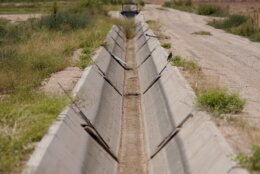 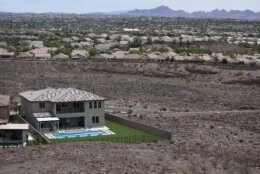 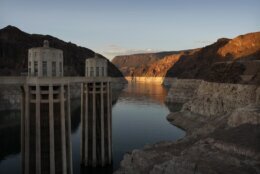 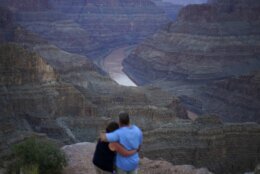 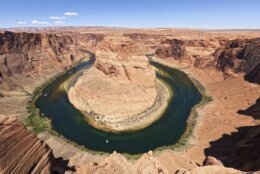 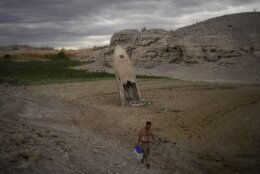 SALT LAKE CITY (AP) — Hydroelectric turbines may stop turning. Las Vegas and Phoenix may be forced to restrict water usage or growth. Farmers might cease growing some crops, leaving fields of lettuce and melons to turn to dust.

Those are a few of the dire consequences that could result if states, cities and farms across the American West cannot agree on how to cut the amount of water they draw from the Colorado River.

Yet for years, seven states that depend on the river have allowed more water to be taken from it than nature can replenish. Despite widespread recognition of the crisis, the states missed a deadline this week to propose major cuts that the federal government has said are necessary.

And again, the government failed to force harsh decisions and stopped short of imposing the cuts on its own, despite previous threats to do so.

Any unilateral action from federal officials would likely move conversations from negotiating tables to courtrooms and delay action even longer.

The river, which cascades from the Rockies down to the deserts of the Southwest, quenches the thirst of 40 million people in the U.S. and Mexico and sustains a $15 billion-a-year agricultural industry.

But for a century, agreements governing how it’s shared have been based on faulty assumptions about how much water is available. With climate change making the region hotter and drier, that discrepancy is becoming impossible to ignore.

Lake Powell and Lake Mead, the two largest reservoirs that hold Colorado River water, have fallen to dangerously low levels faster than anyone expected. The decline threatens to disrupt hydroelectric power production and water sent to cities and farms.

Though everyone agrees the stakes are high, states and the U.S. government have struggled to reach a consensus on what to do.

People have “been hoping to stave off this day,” said Felicia Marcus, a former top water official in California, which holds the largest right to the river’s water. “But now I think we can’t expect Mother Nature to bail us out next year. The time for some of these really hard decisions is now.”

For years, officials have issued warnings about the state of the river, but also reassured people that the system won’t crash. That two-part message was front and center this week, when the states failed to meet a deadline set by the Bureau of Reclamation for them to propose 15% to 30% cuts to their water use.

As the deadline passed Tuesday, the potentially dramatic moment amounted to a shrug. Officials said they still have faith the states will reach a deal if given more time.

Visiting California the next day, Reclamation Commissioner Camille Touton repeatedly dodged questions about what might happen next. She’s given no specifics about what the bureau’s more aggressive actions might look like, or when they might happen.

The federal government, she said, “is ready to move forward on our own.” But officials “will continue to talk to everybody about what the process is.”

Not everyone is satisfied with that approach.

“I’m asking them to at least lay out very clearly how that threat will be imposed,” Southern Nevada Water Authority General Manager John Entsminger said.

Entsminger and his counterparts in Arizona, Utah and California, as well as local officials in and around Phoenix, also repeated what has become a common refrain: They said they were gravely concerned about the river’s future, yet wanted to reassure their water users that the river won’t stop flowing imminently.

“This is not a situation where people should be concerned about, you know, water running out in days or weeks or even months. But it’s very clear that this entire river system is experiencing something that’s never happened before,” said Wade Crowfoot, California’s natural resources secretary.

The cuts would force hard decisions about who has to live with less. Water bills could rise as states tap other sources and adopt technology such as wastewater recycling to make up the difference.

In some places, officials have voluntarily implemented strict conservation measures, including limiting lawn watering and paying farmers not to plant fields, even banning new water hookups. The climate legislation signed Tuesday by President Joe Biden provides $4 billion that could be used to pay Colorado River users to cut back, but it’s not clear how that would work.

The river’s shrinkage has inflamed tensions between Rocky Mountain states and their downstream neighbors over who should shoulder the burden. It also pits growing cities against agricultural regions.

In Pinal County, Arizona, Kelly Anderson grows specialty crops for the flower industry and leases land to alfalfa farmers whose crops feed cattle at nearby dairy farms. He expects about half of the area to go unplanted next year, after farmers in the region lose all access to the river.

Though farmers use most of the water, they have less wiggle room to conserve than cities, which can more easily recycle water or tap other sources. The river is a lifeblood in places like California’s Imperial Valley, which grows vegetables like broccoli, onions and carrots. Water shortages could send ripple effects throughout the food system.

States aren’t the only ones at the table. Native American tribes hold some of the oldest water rights and occupy a unique position in negotiations because the federal government is required to protect their interests.

The Colorado River Indian Tribes along the Arizona-California border have contributed water to boost Lake Mead in the past. They could be called on again.

“Our senior rights do not mean we can or should sit on the sidelines,” Colorado River Indian Tribes Chairwoman Amelia Flores said. “We won’t let this river die.”

Upper basin states — Utah, Colorado, New Mexico and Wyoming — argue that they shouldn’t face cuts because they historically haven’t used all the water they were promised a century ago.

They want to protect their share in anticipation of population growth and haven’t pursued policies that save water as much as states like Arizona and Nevada.

Zach Frankel, executive director of the Utah Rivers Council, said many in the Rockies cling to an erroneous belief that their water rights are safe, cuts will continue to hit their downstream neighbors and one wet winter could reverse the river’s decline.

“If we don’t agree about what the crisis is, we’re not going to have the impetus to come up with a solution,” he said.

Arizona, Nevada and California say they’re willing to put water or money on the table, but so far that hasn’t been enough to yield an agreement.

A growing chorus of veteran officials and environmental advocates say both the states and the federal government are sending muddled messages by stressing the gravity of the situation yet delaying meaningful action.

James Eklund, an attorney and former director of the Upper Colorado River Commission, said the shrinking reservoirs present an opportunity to rethink how to manage the river and incentivize conservation — if only officials will take it.

Bureaucrats, he said, continue to think they can postpone changes. The problem is “that doesn’t really work here because no action means we’re driving toward a cliff.”