BOISE, Idaho (AP) — It’s likely that virtually all abortions will be banned eventually in deeply conservative Idaho, along with most other Republican-dominated states, but there are still battles to play out in court and maybe the legislature as abortion rights advocates continue to try to resist what could be inevitable.

Wednesday, lawyers for a doctor, a regional Planned Parenthood affiliate and the state government went before the Idaho’s state Supreme Court for arguments over whether a series of bans can be enforced this month. Even if the advocates prevail, state lawmakers could adopt new bans.

The legal and political landscape has shifted almost daily since the June 24 U.S. Supreme Court ruling that overturned the 1973 Roe v. Wade decision and allowed states to determine whether abortion should be allowed.

Abortion rights groups had perhaps their biggest victory since the June 24 ruling on Tuesday, when Kansas voters decisively defeated an amendment to the state constitution that would have allowed lawmakers to impose restrictions on abortion — or even a ban. The conservative state was the first in the nation to have a ballot question on abortion since Roe v. Wade was overturned.

And Wednesday, a Michigan judge extended an order that bars county prosecutors from enforcing a 1931 abortion ban in that state until at least Aug. 17.

Bans on abortion at any point in pregnancy are being enforced in eight states and as soon as fetal cardiac activity can be detected – generally around six weeks’ gestation – in another five. And most or all clinics have stopped offering abortion services in a handful of additional states because of legal uncertainty.

Abortion rights groups, which have spent decades in courts trying to preserve access, are continuing the fight even in places such as Idaho, where they’re unlikely to prevail in the long run.

In several cases, judges have paused enforcement of bans, allowing at least some abortions to continue, at least for a time.

In Kentucky, where enforcement of a ban has stopped and started multiple times since June, enforcement was allowed to resume with a ruling Monday.

And in Louisiana, there were about 610 abortions per month in 2021. With the shifting status, 249 were reported from June 24 through July 29. While that’s far fewer than normal in that period, the legal fight did allow some patients access.

Rachel Sussman, vice president of state policy and advocacy for Planned Parenthood, said that the goal is to remove all barriers to abortion access, but that partial victories can help women, too. “Whatever access we are able to maintain, we are going to fight for it,” she said.

In the Idaho cases, Dr. Caitlin Gustafson and Planned Parenthood Great Northwest, Hawaii, Alaska, Indiana, Kentucky are suing the state over three laws. One that would take effect on Aug. 25 would effectively ban all abortions. Another, which is not yet in place because of a court-issued stay, allows potential relatives of a fetus or embryo to sue medical providers who perform an abortion. A third law expected to take effect on Aug. 19 would ban abortions for pregnancies beyond six weeks of gestation and was not scheduled to be part of Wednesday’s hearing.

It quickly became clear that the three laws are intertwined. Justice Robin Brody noted that the laws refer to one another and even have language to make clear which would take precedent if all three were in effect.

Though the six-week abortion ban both contain exceptions for procedures done to save the life of the pregnant person or in cases of rape or incest, the exceptions set a very high bar that experts say will be difficult to meet. For instance, people using the rape or incest exception will have to report the crime to law enforcement and then show that report to the abortion provider — but it often takes weeks or months to obtain a copy of a newly filed police report under Idaho’s public record laws.

The total abortion ban would allow health care providers to be charged with a crime even if the abortion is the only way to save their patient’s life — but the health care providers could then try to defend themselves in court with evidence that the procedure was necessary because of an immediate medical emergency.

“That language gives no indication of how imminent, or substantial, the risk of death must be in order for a provider to feel confident” performing the abortion, said Alan Schoenfeld, the attorney representing the plaintiffs told the justices Wednesday. “Suppose a patient with pulmonary hypertension has a 30 to 50% risk of dying … is that enough?”

The doctor and abortion rights group argue that the law allowing potential relatives of an embryo or fetus to sue abortion providers wrongly takes enforcement of a state law and puts it in the hands of individuals instead of state entities, a violation of the separation of government powers. The law allows the father, grandparents, siblings, aunts and uncles of a “preborn child” to each sue an abortion provider for a minimum of $20,000 in damages within four years after the abortion. Rapists can’t file a lawsuit under the law, but relatives of rapists could.

In court Wednesday, Monte Neil Stewart, a lawyer representing the Legislature, urged the state’s justices to end a stay preventing enforcement of the laws.

“Because of that stay, preborn children are being killed in Idaho, contrary to duly enacted and wholly valid statutes,” he said.

Deputy Attorney General Megan Larrondo, representing the state, noted that abortion has been a crime since Idaho was a territory. “There is no way that the framers, the drafters of the Idaho Constitution, were thinking that they were enshrining something as a fundamental right that was criminally prohibited at the time that they were drafting the document,” she said.

But Schoenfeld reminded the court that women weren’t allowed to vote when the state constitution was drafted, and many things that were considered crimes at the time have since been found to be unconstitutional under the document.

A written opinion is expected in coming weeks — perhaps before the bans are to take effect later this month.

The court is expected to decide in the coming days or weeks whether the abortion bans will go into effect or remain on hold while the lawsuits proceed.

Lawmakers have made it clear that they want a ban in place. And the Idaho GOP during its annual convention last month passed a resolution opposing abortion in all instances — even if it is done to save the life of the mother.

Still, abortion rights advocates have become galvanized in the wake of the U.S. Supreme Court’s ruling, including in Idaho.

Abortion rights protests have garnered big crowds in Boise. And the Boise City Council last month passed a resolution that limits the funding for investigating abortions and stating that investigations for the purpose of prosecuting abortion providers will not be prioritized.

This story has been updated to correct the name of the attorney quoted in the 17th paragraph to Monte Neil Stewart. Stewart is representing the Idaho Legislature with fellow attorney Daniel Bower. 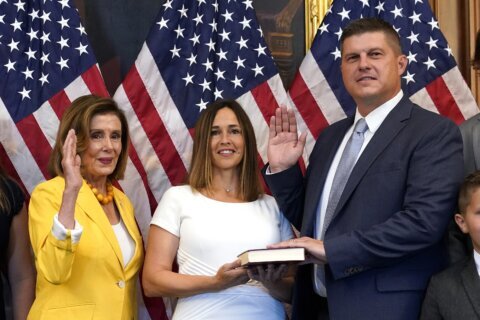