Tribes in South Dakota are working with a rural Massachusetts museum to return hundreds of items believed to have been taken from ancestors massacred at Wounded Knee Creek in 1890.
Listen now to WTOP News WTOP.com | Alexa | Google Home | WTOP App | 103.5 FM
(1/5) 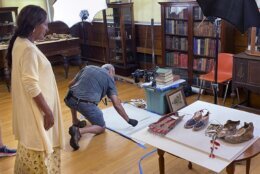 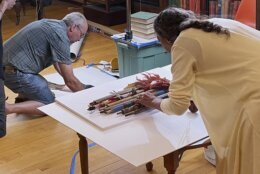 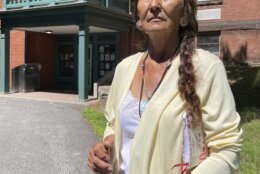 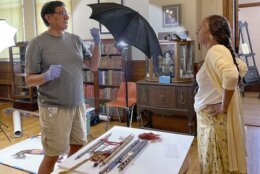 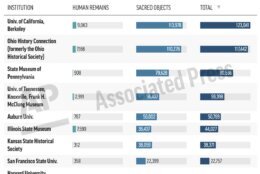 BARRE, Mass. (AP) — One by one, items purportedly taken from Native Americans massacred at Wounded Knee Creek emerged from the dark, cluttered display cases where they’ve sat for more than a century in a museum in rural Massachusetts.

Moccasins, necklaces, clothing, ceremonial pipes, tools and other objects were carefully laid out on white backgrounds as a photographer dutifully snapped pictures under bright studio lights.

It was a key step in returning scores of items displayed at the Founders Museum in Barre to tribes in South Dakota that have sought them since the 1990s.

“This is real personal,” said Leola One Feather, of the Oglala Sioux Tribe, as she observed the process as part of a two-person tribal delegation last week. “It may be sad for them to lose these items, but it’s even sadder for us because we’ve been looking for them for so long.”

Recent efforts to repatriate human remains and other culturally significant items such as those at the Founders Museum represent significant and solemn moments for tribes. But they also underscore the slow pace and the monumental task at hand.

Some 870,000 Native American artifacts — including nearly 110,000 human remains — that should be returned to tribes under federal law are still in the possession of colleges, museums and other institutions across the country, according to an Associated Press review of data maintained by the National Park Service.

The University of California, Berkeley tops the list, followed closely by the Ohio History Connection, the state’s historical society. State museums and universities in Pennsylvania, Tennessee, Alabama, Illinois and Kansas as well as Harvard University round out the other top institutions.

And that’s not even counting items held by private institutions such as the Founders Museum, which maintains it does not receive federal funds and therefore doesn’t fall under the Native American Graves Protection and Repatriation Act, or NAGPRA, the 1990 law governing the return of tribal objects by institutions receiving federal money.

“They’ve had more than three decades,” says Shannon O’Loughlin, chief executive of the Association on American Indian Affairs, a national group that assists tribes with repatriations. “The time for talk is over. Enough reports and studying. It’s time to repatriate.”

Dan Mogulof, an assistant vice chancellor at UC Berkeley, says the university is committed to repatriating the entire 123,000 artifacts in question “in the coming years at a pace that works for tribes.”

In January, the university repatriated the remains of at least 20 victims of the Indian Island Massacre of 1860 to the Wiyot Tribe in Humboldt County, California. But its Phoebe A. Hearst Museum of Anthropology still holds more than 9,000 sets of ancestral remains, mainly from Bay-area tribes.

“We acknowledge the great harm and pain we have caused Native American people,” Mogulof said. “Our work will not be complete until all of the ancestors are home.”

At the Ohio History Connection, officials are working to create an inter-tribal burial ground to help bury ancestral remains for tribes forced to move from Ohio as the nation expanded, says Alex Wesaw, the organization’s director of American Indian relations.

The institution took similar steps in 2016 when it established a cemetery in northeast Ohio for the Delaware tribes of Oklahoma to re-bury nearly 90 ancestors who had been stored for centuries in museums in Pennsylvania.

Complicating matters, some of its more than 7,000 ancestral remains and 110,000 objects are thousands of years old, making it difficult to determine which modern-day tribe or tribes they should be returned to, Wesaw said.

At the Founders Museum, some 70 miles (112 kilometers) west of Boston, among the challenges has been determining what’s truly from the Wounded Knee Massacre, says Ann Meilus, the museum’s board president.

Some tribe members maintain as many as 200 items are from massacre victims, but Meilus said museum officials believe its less than a dozen, based on discussions with a tribe member more than a decade ago.

The collection was donated by Barre native Frank Root, a 19th century traveling showman who claimed he’d acquired the objects from a man tasked with digging mass graves following the massacre.

Among the macabre collection was a lock of hair reportedly cut from the scalp of Chief Spotted Elk, which the museum returned to one of the Lakota Sioux leader’s descendants in 1999. It also includes a “ghost shirt,” a sacred garment that some tribe members tragically believed could make them bulletproof.

“He sort of exaggerated things,” Meilus said of Root. “In reality, we’re not sure if any of the items were from Wounded Knee.”

More than 200 men, women, children and elderly people were killed on the Pine Ridge Indian Reservation in 1890 in one of the country’s worst massacres of Native Americans. The killings marked a seminal moment in the frontier battles the U.S. Army waged against tribes.

The U.S. Department of Interior recently proposed changes to the federal repatriation process that lay out more precise deadlines, clearer definitions and heftier penalties for noncompliance.

Tribe leaders say those steps are long overdue, but don’t address other fundamental problems, such as inadequate federal funding for tribes to do repatriation work.

Many tribes also still object to requirements that they explain the cultural significance of an item sought for repatriation, including how they’re used in tribal ceremonies, says Brian Vallo, a former governor of the Pueblo of Acoma in New Mexico who was involved in the 2020 repatriation of 20 ancestors from the National Museum of Finland and their re-burial at Mesa Verde National Park in Colorado.

“That knowledge is only for us,” he said. “It’s not ever shared.”

Stacy Laravie, the historic preservation officer for the Ponca Tribe in Nebraska, is optimistic museum leaders are sincere in seeking to rectify the past, in the wake of the national reckoning on racism that’s reverberated through the country in recent years.

Last month, she traveled with a tribal delegation to Harvard to receive the tomahawk of her ancestor, the Native American civil rights leader Chief Standing Bear. She’s also working with the university’s Peabody Museum to potentially repatriate other items significant to her tribe.

“We’re playing catch up from decades of things getting thrown under the rug,” Laravie said. “But I do believe their hearts are in the right place.”

Back at the Founders Museum, Jeffrey Not Help Him, an Oglala Sioux member whose family survived the Wounded Knee Massacre, hopes the items could return home this fall, as the museum has suggested.

“We look forward to putting them in a good place,” Not Help Him said. “A place of honor.”