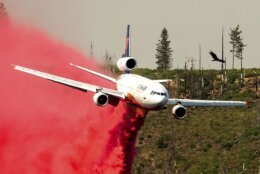 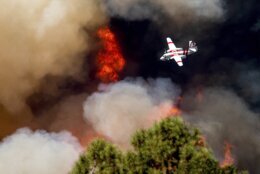 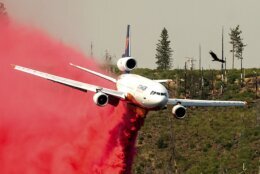 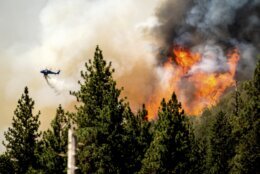 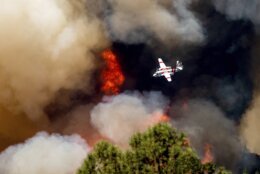 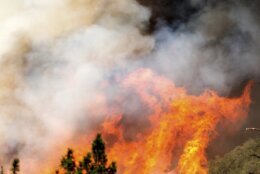 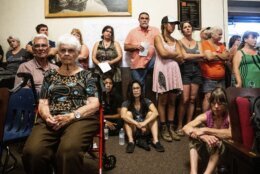 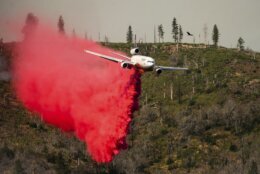 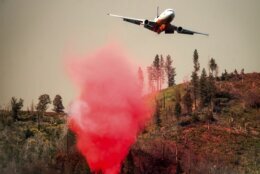 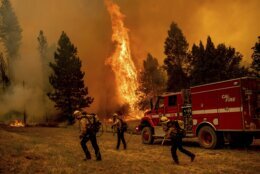 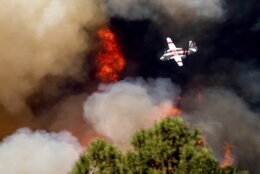 JERSEYDALE, Calif. (AP) — Firefighters have significantly slowed the spread of a huge wildfire burning in a forest near Yosemite National Park that burned 55 homes and other buildings and forced thousands from their homes, officials said Monday.

“It was a successful day for aircraft and firefighters, resulting in minimal growth on the fire. Helicopters dropped 300,000 gallons of water on the fire. Crews continue to construct control lines and extinguish hot spots along existing lines,” said a Monday night report by the California Department of Forestry and Fire Protection, or Cal Fire.

Thousands of residents from mountain communities were still under evacuation orders Monday while smoke from the fire drifted more than 200 miles (322 kilometers), reaching Lake Tahoe, parts of Nevada and the San Francisco Bay Area, officials said.

“It’s been just horrendous with the air quality,” said Kim Zagaris, an advisor with the Western Fire Chiefs Association, which maps wildfires across the country.

More than 2,500 firefighters with aircraft support were battling the blaze, known as the Oak Fire, that erupted last Friday southwest of the park, near the town of Midpines in Mariposa County. Officials described “explosive fire behavior” on Saturday as flames made runs through bone-dry vegetation caused by the worst drought in decades.

The blaze had consumed 27 square miles (70 square kilometers) of forest land, with 16% containment, Cal Fire said. The cause was under investigation.

Firefighters on Monday struggled in steep terrain in temperatures that reached the mid- to high 90s.

There are two major blazes burning in California, which is experiencing a fairly typical ramp-up to what is sure to be an active fire year once California’s infamous Santa Ana and Diablo wind events begin in September, Zagaris said.

“We’ve been fortunate. We’re not quite as far along as we were at this time last year,” he said. “But the fuels, the vegetation, are much dryer than they were last year. It’s so dry out there.”

Zagaris compared the wildfires in California this year to 2008, when few blazes burned early but a mid-summer barrage of lightning hit the state “and before we knew it there were 2,000 fires burning in the northern part of the state.”

Evacuations were in place Monday for over 6,000 people living across a several-mile span of the sparsely populated fire zone in the Sierra Nevada foothills, though a handful of residents defied the orders and stayed behind, said Adrienne Freeman, a U.S. Forest Service spokesperson.

“We urge people to evacuate when told,” she said.

Jane and Wes Smith lost their home of more than 37 years and Jane had only enough time to load her two horses and flee, according to their son, Nick Smith, SFGate reported.

Wes Smith is a coordinator for the Mariposa County Emergency Services and was working on the fire response as their home burned.

The couple “have lost everything. 37 years of memories, generations of family treasures and countless more sentimental things,” their son said on a GoFundMe page.

Numerous roads were closed, including a stretch of State Route 140 that’s one of the main routes into Yosemite.

California has experienced increasingly larger and deadlier wildfires in recent years as climate change has made the West much warmer and drier over the past 30 years. Scientists have said weather will continue to be more extreme and wildfires more frequent, destructive and unpredictable.

Pacific Gas & Electric said on its website that more than 2,600 homes and businesses in the area had lost power as of Monday and there was no indication when it would be restored.

The Oak Fire was sparked as firefighters made progress against an earlier blaze, the Washburn Fire, that burned to the edge of a grove of giant sequoias in the southernmost part of Yosemite National Park.

The latter fire, spanning a 7.5-square-mile (19-square-kilometer) area, was 87% contained on Monday after burning for two weeks and moving into the Sierra National Forest.

Plane bumps another while backing up at Boston airport