CHICAGO (AP) — In 2019, Robert E. Crimo III was too young to apply independently for a gun license in Illinois.

His father sponsored the application just months after an unidentified family member called police to report that the son had a collection of knives and had threatened to “kill everyone.”

Illinois State Police reviewed the license application and found no reason to deny it because Crimo had no arrests, no criminal record, no serious mental health problems, no orders of protection and no other behavior that would disqualify him.

By 2021, the 21-year-old man had purchased at least five weapons. Now he’s accused of using a semi-automatic rifle to open fire on a crowd of unsuspecting July 4 paradegoers in the Chicago suburb of Highland Park, killing seven people and wounding at least 30 more.

The accused gunman’s parents are also under scrutiny as the reeling community questions why they apparently supported their son’s interest in guns only months after he reportedly threatened suicide and violence.

Anti-gun violence advocates are encouraged to see police and prosecutors investigating anyone who may have contributed to the attack, including the accused shooter’s parents.

“For too long we have only held the individual that’s pulled the trigger accountable for their actions that have led to the violence,” said Christian Heyne, vice president of policy at the Brady campaign. “But the more we understand about gun violence on the whole, the more we understand that other people made it possible.”

That is the case in the May 14 shooting in Buffalo, New York, where 10 Black people died in an attack by an 18-year-old white gunman. The prosecutor there has said no one else is expected to be criminally charged, although court filings indicate the parents may face at least one lawsuit.

One exception is still moving through a Michigan state court, where in December a prosecutor charged the parents of a 15-year-old boy with involuntary manslaughter following the fatal shooting of four students at the teenager’s high school. He was charged as an adult with murder and terrorism.

WHAT DO WE KNOW ABOUT CRIMO’S HISTORY?

Police have said Crimo had two previous encounters with authorities.

In April 2019, Crimo attempted suicide by machete, according to a police report obtained by The Associated Press that noted a “history of attempts.”

In September 2019, police returned after a family member reported that Crimo had a collection of knives and had threatened to “kill everyone.” But according to Illinois State Police, both Crimo and his mother disputed the threat of violence.

“The individual told police he did not feel like hurting himself or others and was offered mental health resources,” the statement said.

Police have said father Bob Crimo — a former candidate for mayor of Highland Park — later told investigators the knives belonged to him, and authorities returned them.

When the younger Crimo applied for a state gun license in December 2019, his father supported it, a requirement for applicants who are under 21.

WHY IS IT RARE FOR PARENTS TO FACE CHARGES?

Proving a criminal charge requires convincing jurors or a judge of guilt beyond a reasonable doubt. That’s difficult in a scenario where the defendant didn’t personally take action, said Paul Cain, a professor of law at Northern Illinois University.

“They have to show the parents aided and abetted crime in some way for there to be an accountability based charge,” Cain said. “That’s the getaway car driver who didn’t actually go in and rob the store at gunpoint … but performed some action to allow that robbery to go forward.”

Katherine Schweit, retired FBI agent who developed the agency’s active shooter program, agreed that prosecutors’ challenge is showing a strong connection to the crime — “where they could have prevented it and chose not to.”

“Just because somebody knows that someone isn’t as safe as the rest of us would like them, that doesn’t mean that person can be charged,” she said. “There has to be some level of proximate cause attached.”

Lake County State’s Attorney Eric Rinehart declined this week to say whether his office will pursue charges against Crimo’s parents.

In media interviews, Bob Crimo has said he does not expect to face charges and does not believe he did anything wrong by helping his son get a gun license through the state’s established process.

WHEN HAVE CHARGES BEEN BROUGHT?

The involuntary manslaughter charges filed in Michigan against James and Jennifer Crumbley made international headlines because the decision was such a departure from the norm.

Prosecutors accused the Crumbleys of failing to keep their son away from the semi-automatic rifle his father had purchased and taking no action after school officials found a drawing and written threats at the boy’s desk hours before the shooting.

“The notion that a parent could read those words and also know that their son had access to a deadly weapon that they gave him is unconscionable — it’s criminal,” Oakland County prosecutor Karen McDonald said as she announced the charges.

The Crumbleys have pleaded not guilty, and their attorneys have said they were devastated after learning their son was accused in the killings.

In May, an Illinois man was found guilty of illegal delivery of a firearm to a person who had been treated for mental illness within the past five years. Prosecutors said the father gave his son an assault-style rifle that he later used to shoot and kill four people in 2018 at a Waffle House in Tennessee, despite knowing the son had received mental health treatment.

In 2020, the mother of an Indiana teen was placed on probation for failing to remove guns from her home after her mentally ill son threatened to kill students. He fired shots inside his school in 2018. No one was injured, but the boy killed himself.

In Washington state, the father of a boy who killed four students at a high school in 2014 was convicted of illegally possessing firearms. He was not charged in the shooting, although one of his guns was used. 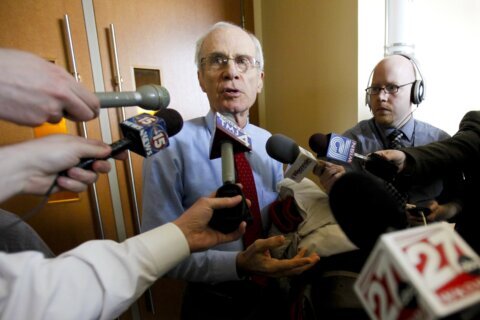