Her campaign immediately responded, saying it was an error and she meant to say "a historic victory for right to life by the Supreme Court."
Listen now to WTOP News WTOP.com | Alexa | Google Home | WTOP App | 103.5 FM

“Mary stumbles while saying ‘Right to Life’ and the fake news vultures are out,” her spokesperson Isaiah Wartman said in a statement to CBS News.

Wartman said Miller has the “most Pro-Life voting record in Congress” and that she is the “proud grandmother of two beautiful grandchildren” who have Down syndrome.

Miller represents Illinois’ 15th District, and due to redistricting, she is locked in a primary battle against another incumbent Republican, Rep. Rodney Davis, who represents the 13th District. The primary election is on Tuesday. 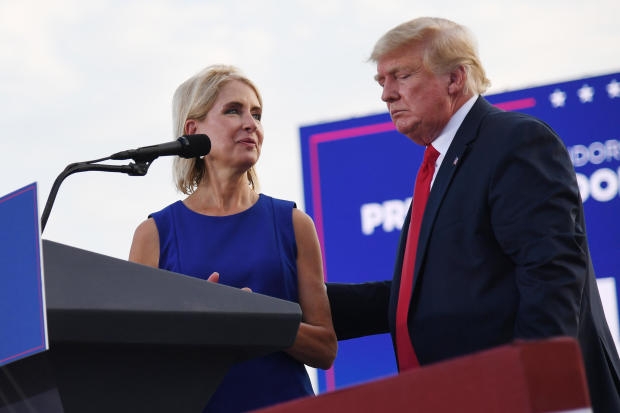 U.S. Rep. Mary Miller, a Republican from Illinois, is welcomed to the stage by former President Trump during a rally at the Adams County Fairgrounds on June 25, 2022, in Mendon, Illinois.

Trump called Miller a “warrior for our movement and our values” during Saturday’s rally.

In a statement, Davis called her comments “just another part in a disturbing pattern of behavior she’s displayed since coming to Congress” and said it was similar to a “Biden basement strategy” of not answering questions. Davis cited some previous controversies involving Miller, including when she praised Adolf Hitler at a January 2021 rally, and said she is “not fit for public office.”

Miller called Davis, an Illinois co-chair of Trump’s 2020 campaign, a “RINO,” or Republican in name only, according to CBS Peoria affiliate WMBD. Davis is one of 35 House Republicans who voted to create an independent commission to investigate the Jan. 6 attack on the U.S. Capitol. Those plans were later abandoned and Democrats created a select committee, which House Minority Leader Kevin McCarthy later blocked Republicans from joining.

The committee is holding public hearings to show what they’ve learned so far about Trump’s refusal to accept the 2020 election results and the pressure campaign on lawmakers to overturn the results in the lead-up to the attack.

Aaron Navarro contributed to this report.