LOS ANGELES (AP) — California is a Democratic fortress, but Tuesday’s primary election may have revealed some cracks.

Gov. Gavin Newsom and other top-tier Democrats emerged safely from contested statewide races in which they will be strongly favored this fall, and the Legislature appears on track to stay firmly in Democratic control.

But the ouster of San Francisco’s top prosecutor in a recall election could foreshadow problems for the progressive district attorney in Los Angeles. And the front-running performance of billionaire Republican-turned-Democrat Rick Caruso in the Los Angeles mayor’s race highlights frustration with crime and homelessness that will influence other races this year.

A string of closely matched U.S. House contests anchored in Orange County and the Central Valley will figure in control of Congress.

Takeaways from Tuesday’s primary election in the nation’s most populous state:

Los Angeles and San Francisco have long been in the vanguard of progressive politics. But results Tuesday suggested voters who might lean toward lofty ideals also want results on the street.

In LA, Caruso positioned himself as an outsider challenging the city’s progressive establishment amid an unabated homeless crisis, soaring rents and home prices, and worries over crime. He was running first in preliminary returns and will face Democratic Rep. Karen Bass, a stalwart in the party’s progressive wing, in a November runoff that will bring a stark contrast to voters.

The developer of high-end malls who sits on the board of the Ronald Reagan Presidential Foundation spent more than $40 million on the contest, much of it from his estimated $4.3 billion fortune. Bass and her allies have compared Caruso to former President Donald Trump and argue he’s more interested in power than the plight of struggling people on the streets.

The contest will test whether a left-leaning city in which Republicans represent a mere 13% of voters will embrace a change in direction for the first time in decades.

In San Francisco, progressive District Attorney Chesa Boudin was elected in 2019 after promising a new approach to law enforcement that stressed alternatives to incarceration and ending the war on drugs that disproportionately harmed people of color. He was ousted in a recall b y a wide margin Tuesday amid longstanding complaints over open drug use, robberies and vandalism.

But in the statewide primary Tuesday, progressive state Attorney General Rob Bonta easily advanced to a November runoff. Boudin’s loss is most likely to reverberate in Los Angeles, where a campaign is underway to recall progressive District Attorney George Gascón.

A string of competitive U.S. House races in California will play into the fight to control Congress. Democrats are defending a slim, endangered majority in the chamber in midterm elections that typically punish the party in the White House.

One of the marquee races will be in a Democratic-leaning district north of Los Angeles, where Republican Rep. Mike Garcia will have a rematch with the Democrat he defeated two years ago, former legislator Christy Smith.

And in the Central Valley, Republican Rep. David Valadao was hoping to advance to a November showdown with Democrat Rudy Salas, though the vote count remained incomplete.

Republicans haven’t won a statewide race in heavily Democratic California since 2006. The party’s best chance of breaking that dismal record might be in a little-recognized agency that plays a watchdog role over public dollars — the state controller.

The top vote-getter in Tuesday’s primary for the job was Republican Lanhee Chen, the son of immigrants from Taiwan who holds multiple Harvard University degrees, served in President George W. Bush’s administration and won the support of the left-leaning Los Angeles Times editorial board.

Regardless of the outcome on the Democratic side, Chen’s challenge will be growing his support beyond the 37% of the vote he had in preliminary primary returns. Recent history shows it will not be easy in a state where Democrats outnumber registered Republicans by nearly 2-to-1.

A BIG NIGHT FOR DEMOCRATIC BIG NAMES — OR NOT?

Democratic Gov. Gavin Newsom and U.S. Sen. Alex Padilla coasted to November runoffs in which they are heavily favored, but preliminary results suggested a slight dip in enthusiasm for two of the state’s leading politicians.

Newsom gathered 62% of the vote in beating back an attempted recall last year, but incomplete returns showed him with 56% in Tuesday’s primary for a second, four-year term.

Padilla ran up over 64% of the vote when he was reelected secretary of state in 2018, before he was appointed to the Senate to fill a vacancy when former Sen. Kamala Harris was selected to be President-elect Joe Biden’s vice president. In races Tuesday for a full Senate term and to complete the remainder of his current one, he was tallying roughly 54%.

Nonetheless, the two Democrats also held huge margins over their closest Republican rivals, not surprising in a state where Democrats control every statewide office and dominate the Legislature and congressional delegation by wide margins.

One reason for the lower numbers: The races for governor and Senate are widely seen as walkovers for the incumbents, and contests lacking drama are less likely to motivate voters to fill out a ballot. Additionally, they were competing on ballots with a long list of contenders, which inevitably dilutes the vote.

At one point, Newsom was seen in imminent danger in the 2021 recall election but “that’s not the case this time,” noted Claremont McKenna College political scientist Jack Pitney. There’s “no suspense about the outcome.” 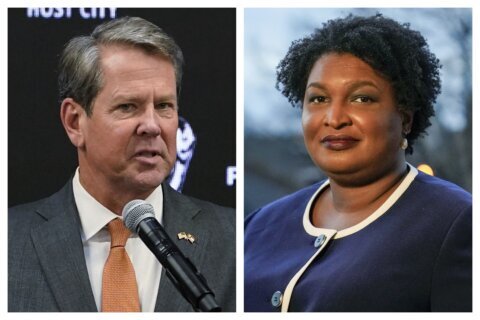