CHICAGO (AP) — A 5-month-old girl was shot to death while in the rear of a car in a neighborhood on Chicago’s South Side.

The infant, who was identified as Cecilia Thomas, was struck in the head Friday evening when shots were fired from another vehicle in the South Shore neighborhood, according to police and the Cook County Medical Examiner’s Office.

Cecilia was taken to a hospital where she later died.

A 41-year-old man in another vehicle was in good condition at a hospital after suffering a gunshot wound near his eye, Chicago police said.

No arrests have been made, and authorities have provided no details on what led to the shooting or how it happened. Police said Saturday that they did not have any updates.

The baby is among the youngest victims of gun violence in Chicago. She would have turned 6-months-old in four days, according to Natalia Derevyanny, a spokeswoman for the Cook County Medical Examiner’s Office.

As of June 19, the Chicago Police Department had recorded 282 homicides so far this year, down from the 316 recorded during the same period in 2021. Like many other cities in the U.S., Chicago reported a dramatic increase in homicides last year. The 797 homicides in the nation’s third-largest city in 2021 — Chicago’s highest toll for any year in a quarter century — eclipsed Los Angeles’ tally by 400 and the total in New York by nearly 300.

Crisis responder Andrew Holmes, who spoke with Cecilia’s mother, expressed anger at the shooter, saying, “you shouldn’t sleep at night” and urged the person to turn themselves in.

“You just took this baby’s life. This baby was an infant, this baby didn’t do nothing to you,” he said.

Activist Ja’Mal Green was offering a $5,000 reward for information about the shooting. 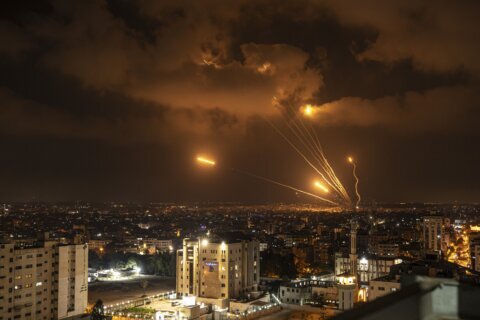