In 25 similar filings with the Oklahoma Court of Criminal Appeals on Friday, Attorney General John O’Connor wrote that the federal court’s stays of execution are no longer in place and that therefore there are no longer any legal impediments to executing the inmates, who have exhausted their appeals.

The state Department of Corrections has asked that the first execution be set no earlier than Aug. 25, O’Connor wrote. He asked that the dates be set at four week intervals due to the time required for a clemency hearing for each inmate prior to an execution, and that the DOC requested executions be set at least 35 days after the court’s order.

“For the sake of the victims’ families, many of whom have waited for decades — as many executions as possible are set four weeks apart,” O’Connor wrote.

O’Connor suggested that the first inmate who should be put to death is James Coddington, whose March 10 execution was postponed after U.S. District Judge Stephen Friot allowed him to join the lawsuit that ultimately failed.

A phone call to the office of an attorney for Coddington rang unanswered Saturday. Defense attorneys have previously said Coddington has a mental illness.

Coddington was convicted and sentenced to die for the 1997 hammer killing in Choctaw of co-worker Albert Hale, who prosecutors said had refused to lend Coddington $50 to buy drugs.

Second on the list, which the filing said was proposed based on when each inmate’s appeals were exhausted, would be Richard Glossip, the lead plaintiff in the federal lawsuit. He was hours from being executed September 2015 when prison officials realized they had received the wrong lethal drug.

Glossip, who was twice convicted and sentenced to die for killing Barry Van Treese, the owner of the motel where Glossip worked, has maintained his innocence.

Don Knight, Glossip’s attorney, noted that a group of Republican lawmakers who question Glossip’s guilt have requested a review of the case.

“Those findings could reveal exculpatory information previously unknown until this point,” Knight said in a statement. “Until everyone has the opportunity to examine the final report, the Attorney General has a moral duty to delay the execution of Richard Glossip.”

Executions in Oklahoma resumed in October with John Grant, who convulsed on the gurney and vomited before being declared dead. Since then, three more executions were carried out without noticeable complications, most recently inmate Gilbert Ray Postelle, who was put to death Feb. 17.

Federal public defender Jennifer Moreno, one of the attorneys who represented the inmates in the failed federal lawsuit, has said an appeal of Friot’s ruling was being considered. 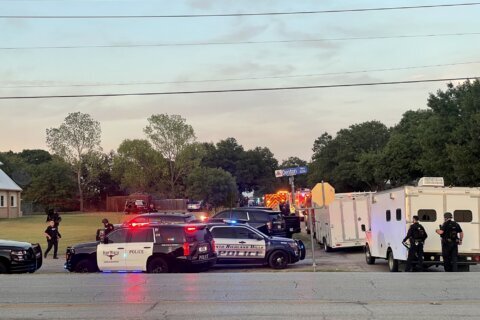