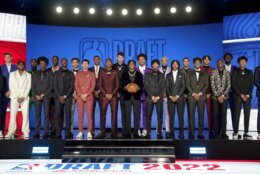 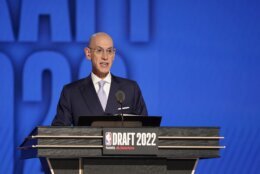 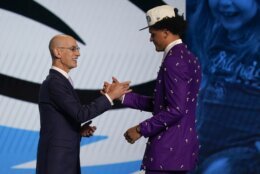 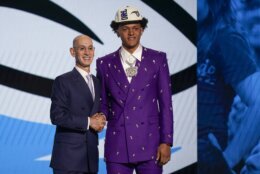 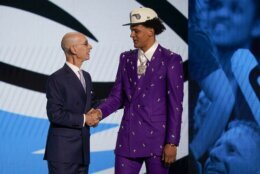 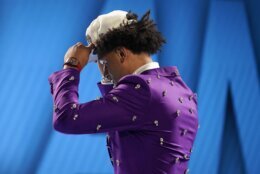 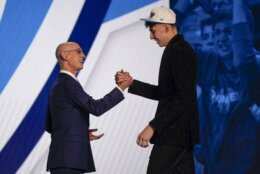 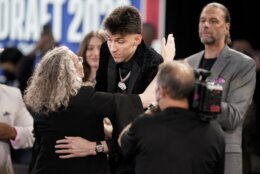 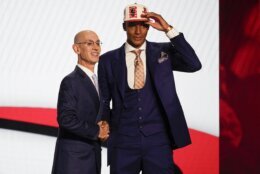 NEW YORK (AP) — The question for weeks leading into the NBA draft was whether the first pick would be Paolo Banchero, Chet Holmgren or Jabari Smith Jr.

The answer finally came Thursday night — and even Banchero didn’t know it until moments before the announcement of the Orlando Magic’s selection.

“I had a feeling from the information I was being told is that it was just kind of up in the air,” Banchero said. “Orlando wasn’t really sure yet, and just to be ready for whatever.

“I didn’t find out, though, that I was actually getting picked until about 20 seconds before the commissioner got on the stage. I didn’t even have time to really think about it or anything. It just kind of happened. I can’t believe it, but I’m ready. I’m ready.”

After leading the Blue Devils to the Final Four in coach Mike Krzyzewski’s final season, the 6-foot-10 forward was called first by NBA Commissioner Adam Silver to begin the draft, beating out fellow first-year forwards Smith and Holmgren.

The order had been debated throughout the process, with Smith often considered the player who would go No. 1.

Instead, he wasn’t even second, falling behind Holmgren to Houston at No. 3.

All the players picked looked thrilled, with Banchero among those crying or coming close as they hugged friends and family.

Wearing a purple suit full of bling, he received a loud ovation inside Barclays Center, where Duke lost in the ACC Tournament final. He came the fourth Duke player taken No. 1 since 1966, when the NBA did away with territorial draft rights, and was followed by Blue Devils teammates Mark Williams (No. 15, Charlotte), A.J. Griffin (No. 16, Atlanta) and Wendell Moore Jr. (No. 26, Dallas).

The Magic were picking first for the fourth time and they’ve done well with their previous choices. They took Shaquille O’Neal in 1992, traded the rights to Chris Webber for Penny Hardaway the next year, and went with Dwight Howard in 2004.

All eventually reached the NBA Finals with the Magic.

Holmgren went second to the Oklahoma City Thunder after the 7-footer led the West Coast Conference in blocked shots, rebounding and shooting percentage at Gonzaga. He looked sharp in his black suit but may need it to eventually be a bigger size for success in the NBA, as he’s listed at just 195 pounds.

He’s not worried about that talk.

“I wake up every day with a plan on how to make myself a better person, better basketball player,” Holmgren said. “I put so much effort into executing that, that it doesn’t really leave room to put effort into things that, one, I can’t control, and two, don’t help make me better.”

The Rockets were happy to end up in Smith who has the skills to go higher. The 6-10 forward from Auburn is a natural fit in the current NBA game, able to defend all three frontcourt positions and with a shooting stroke that allowed him to hit 42% behind the arc.

Forward Keegan Murray, after a huge leap in his second season in Iowa, jumped all the way to the No. 4 pick by the Sacramento Kings. The Detroit Pistons, a year after taking Cade Cunningham with the No. 1 pick, took athletic Purdue guard Jaden Ivey fifth.

Before the selections began, Silver congratulated the Golden State Warriors on their recent NBA championship and reminded fans that their core of Stephen Curry, Klay Thompson and Draymond Green was built through the draft.

All the teams at the top of this draft need help and have recent high picks already on their rosters, so will hope the Warriors way works for them as well.

Bennedict Mathurin, a Canadian who played at Arizona, went to Indiana with the No. 6 pick. The Portland Trail Blazers followed with Kentucky’s Shaedon Sharpe, Dyson Daniels of the G League Ignite was taken eighth by New Orleans, Baylor’s Jeremy Sochan stayed in Texas with San Antonio at No. 9, and Washington rounded out the top 10 with Wisconsin’s Johnny Davis.

Then the trades began, with the New York Knicks moving picks to amass more of them. They dealt the rights to No. 11 pick Ousmane Dieng to Oklahoma City for four first-round selections, then used one of them to acquire the rights to No. 13 pick Jalen Duren from Charlotte and deal him along with Kemba Walker to Detroit for another pick, a person with knowledge of the details told The Associated Press. The person spoke on condition of anonymity because that trade would not become official Thursday.

Walker spent one season with the Knicks but wasn’t with the team after the All-Star break after battling knee problems.

The Warriors made Patrick Baldwin Jr. of Wisconsin-Milwaukee their pick at No. 28 and the first round ended with Oklahoma City taking UCLA’s Peyton Watson and agreeing to trade his rights to Denver. 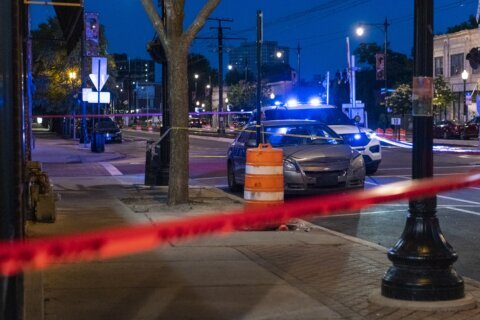