COLUMBIA, S.C. (AP) — U.S. Rep. Nancy Mace is beefing up her campaign coffers in an effort to stave off GOP challenger Katie Arrington in the closing days of the Republican primary race for South Carolina’s 1st District.

The freshman Mace has consistently topped the contest for dollars in the 1st Congressional District, which she won back from Democrats in 2020. Mace has taken in more than $4.1 million in contributions through May 25, the deadline for pre-primary fundraising reports, and has $1.4 million cash on hand.

As they vie for their party’s nomination, both women have been making their case to voters who are either still mulling which of them to pick, or who are already casting ballots. Early voting in South Carolina has been underway since May 31, and more than 28,000 people have already cast primary ballots overall, according to state officials.

Arrington, who went to work at the Department of Defense after her 2018 loss, has largely portrayed herself as a “servant leader” loyal to former President Donald Trump, who is supporting her current bid. Trump backed Mace in 2020 but soured on her following the freshman congresswoman’s critical statements about Trump’s role in the Capitol violence. The former president campaigned for Arrington this spring and reiterated his support for her last month.

To kick off the GOP primary’s only debate, third candidate Lynz Piper-Loomis also threw her support behind Arrington, stripped off her microphone and left the debate stage, whittling down the contest to a head-to-head match.

Additionally, Arrington is backed by Ric Grenell, who served as Trump’s ambassador to Germany. Breaking with his delegation member Mace, U.S. Rep. Joe Wilson has endorsed Arrington, whom he said would be “a tireless advocate for our veterans and the military.”

Along with groups including the National Rifle Association and Club for Growth, Mace is backed by former South Carolina Gov. Nikki Haley, who also served as Trump’s U.N. ambassador, and helped Mace raise $300,000 during an event earlier this year. Mace also has support from Mick Mulvaney, who served as Trump’s chief of staff, budget director and special envoy to Northern Ireland, as well as GOP congressional leaders including U.S. House Minority Leader Kevin McCarthy and U.S. House Minority Whip Steve Scalise.

A new television ad from Mace wonders if voters can “trust Katie Arrington to keep America safe,” pointing to the suspension of Arrington’s security clearance during a Pentagon probe into the exposure of classified information.

Arrington has disputed Mace’s characterization of the clearance issue, arguing she had been politically targeted as a Trump supporter after the Democratic administration of President Joe Biden took over the Pentagon.

Another new spot from a political action committee backing Mace points toward Arrington’s support of South Carolina’s 2017 gas tax overhaul — a stair-step increase aimed at repairing the state’s crumbling roads and bridges — during her single term as a state lawmaker.

A recent ad from Arrington featured voters — as customers — seeking a “refund” on their choice of Mace because “she turned her back” on Trump, among other characterizations.

The winner of the GOP contest will go on to face Dr. Annie Andrews in the general election.

With no primary opposition, the Democrat Andrews has been able to continue raising money — more than $920,000, with more than $568,000 on hand as of pre-primary federal filings — and let the GOP contenders feud with each other. 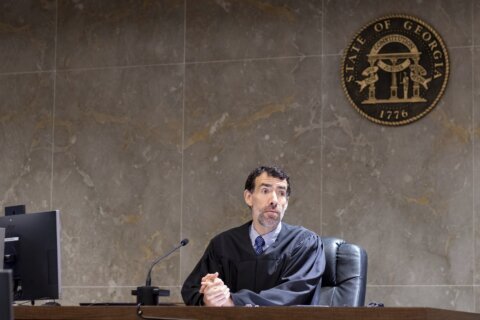