State Judge Patrick McAllister gave state officials only until April 11 to submit new maps, saying the districts they had drawn up were illegally gerrymandered to favor Democrats.

The ruling came even as candidates have begun campaigning in the disputed districts ahead of a June party primary.

State Appellate Division Justice Stephen K. Lindley has already issued a temporary stay on that ruling. He said he’ll decide sometime after Thursday’s hearing whether to leave the stay in place for now, pending more legal action in the weeks ahead.

He could also lift the stay, which would put state lawmakers on an incredibly tight deadline to come up with new maps. Judge McAllister has said if lawmakers don’t meet his deadline, he would appoint his own expert to draw up new maps. The state would likely cover the cost of a special master. Courts sometimes designate an attorney not directly involved with a case, known as a special master, to address such concerns.

Lawyers for the Assembly and Senate argued Thursday that the ruling should be blocked for at least 30 days, and criticized the trial judge’s decision to strike down largely uncontroversial Assembly maps.

Meanwhile, a lawyer for the Republican voters demanded that lawmakers or a court master start working up new maps soon.

Judge Lindley said his primary concern is ensuring New York is ready if appellate judges agree that the new Congressional maps — and potentially Senate maps — are unconstitutional and must be redrawn.

“Voters going to go the polls on unconstitutional districts, that’s something to be avoided at all costs,” Lindley said.

Lindley said that back-up maps could be tossed if the appellate court decides the contested maps pass constitutional muster. He said New York could hold its federal primary as late as around August 23 or 24.

Thursday’s hearing likely won’t be the final word on the main issue: whether the new maps are so politically biased toward Democrats that they violate the state constitution.

The arguments are “just a skirmish along the way,” according to former U.S. Rep. John Faso, a Republican who has been helping muster support for the lawsuit challenging the maps’ legality.

A hearing for more arguments has already been scheduled for April 20.

Meanwhile, candidates faced a Thursday deadline to submit petition signatures they need to appear on the ballot in the primary.

Sen. Mike Gianaris, a Queens Democrat, said this week said he and the New York Legislative Task Force on Demographic Research and Reapportionment are not working on new maps.

“We are confident that we’ve drawn maps that will withstand scrutiny,” Gianaris said Tuesday on the news program ‘Capital Tonight.’

Legislative and congressional boundaries are being redrawn as part of the once-per-decade redistricting process kicked off by the 2020 Census.

The congressional boundaries passed by the Legislature could expand Democrats’ power: Democrats would make up a strong majority of registered voters in 22 of the 26 congressional districts the state will have in 2023.

Republicans, who now hold eight of New York’s 27 seats in Congress, would only have an advantage in four districts.

Democrats have argued the new maps undo decades of gerrymandering by Senate Republicans, and that all maps reflect years of population loss in upstate communities once considered Republican strongholds.

Republicans, and some non-partisan voters rights groups, argue that Democrats went too far to create meandering Congressional districts that violate a 2014 state constitutional amendment banning drawing maps “for the purpose of favoring or disfavoring incumbents or other particular candidates or political parties.”

Voters in 2014 also tasked a politically appointed commission with drawing up the maps.

That commission failed to come to consensus on a single set of maps this year, leaving the job to lawmakers.

Judge Lindley Thursday said “everyone would agree” the commission was set up to fail.

“Everybody knew it, it was obvious,” he said. “It was set up that it was going to be a stalemate “

So far this cycle, courts have also intervened to block maps they found to be GOP gerrymanders in North Carolina, Ohio and Pennsylvania, and a Democratic gerrymander in Maryland.

The highest court in North Carolina pushed back March election primaries until May to provide time for state courts to review lawsuits claiming the Republican-controlled legislature illegally gerrymandered some districts.

In Ohio, state legislative races are delayed amid a legal fight over gerrymandering.

The state hasn’t settled on of district boundaries long enough for them to be used for making ballots: The Republican-led Legislature has repeatedly approved maps that the Ohio Supreme Court has found unconstitutionally drawn to unduly favor Republicans.

And in Maryland, the Court of Appeals delayed the state’s primary for all elections from June 28 to July 19. 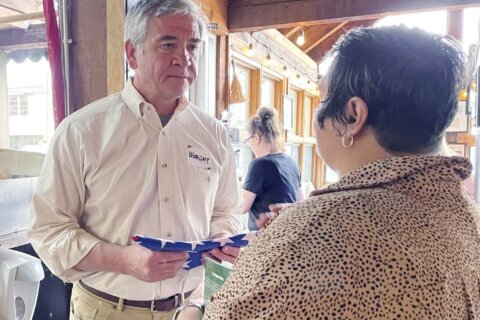