BOISE, Idaho (AP) — Jurors in the rape trial of a former Idaho lawmaker are weighing whether the case involves “power in the wrong hands” used to harm a 19-year-old female intern, or consensual sex after a friendly dinner date.

The jury of six men and six women heard both takes during closing arguments Thursday after a dramatic three-day trial in which the young woman fled the witness stand during testimony, saying “I can’t do this.”

Aaron von Ehlinger, 39, has pleaded not guilty to felony charges of rape and sexual penetration with a foreign object — both charges carry a maximum penalty of up to life in prison — and maintains he had consensual sex with the 19-year-old legislative intern.

Deliberations stretched for seven hours until nearly 8 p.m. Thursday before the jury decided to break for the evening and start again on Friday.

Doe told her supervisors that von Ehlinger, who was then a Republican representative from Lewiston, raped her in March 2021 at his Boise apartment after the two had dinner at a restaurant. Von Ehlinger resigned from the House of Representatives last year after a legislative ethics committee recommended that he be banned from the Statehouse because of his conduct with Doe.

When the allegations became public — largely because of the legislative ethics investigation — Doe faced unrelenting harassment from some of von Ehlinger’s supporters. Her name, photo and personal details about her life were repeatedly publicized in “doxxing” incidents. One of the people who frequently harassed her was in the courthouse to attend the trial, but law enforcement banned the man from the floor where where case was being heard.

Over the span of three days, jurors heard graphic and sometimes harrowing testimony, including from Doe, who briefly took the witness stand before abruptly standing and leaving the courtroom.

“He laid me down … he removed his clothes … he climbed on top of me … in just his boxers. White T-shirt,” Doe said. “He tried to put his fingers between my legs and I closed my knees.”

At that, she stood up.

“I can’t do this,” she said, quickly walking out of the courtroom.

The judge instructed them not to consider her testimony after Doe fled before she could be questioned by the defense.

During closing arguments, Ada County Deputy Prosecuting Attorney Katelyn Farley told jurors that the case was about “power in the wrong hands” used to the “great devastation” of Doe. Von Ehlinger had social, political and physical power over the petite intern, Farley said.

“He used that power to rape and forcibly penetrate her,” Farley said, pointing at von Ehlinger. Doe resisted in several ways, she said, highlighting the testimony of law enforcement investigators and a nurse sexual assault examiner who interviewed Doe after the alleged assault.

But von Ehlinger’s defense attorney Jon Cox told jurors the prosecution’s case was made up of “red herrings,” and said von Ehlinger was a credible person who willingly took the stand to share his side of the story.

“Judge his credibility, that’s all you can do,” Cox said. “For every assertion that the state has made, or any evidence … Aaron has given you a, ‘This is what happened.’ That, in and of itself, creates reasonable doubt.”

During his testimony, von Ehlinger often spoke in a clear, loud voice directly to jurors, telling them the sexual contact was the culmination of a first date with the intern.

“She was flirting with me, so I thought, ‘Why not? Go out to dinner with a person? Why not?’” he said.

After eating at a fancy Boise restaurant, he and Doe decided to return to his apartment, where they began making out on the couch, he said.

“Things were going well, and I asked (Doe) if she would like to move to the bedroom,” von Ehlinger said. “She said ‘Sure.’ We got up, held hands and walked into the bedroom.”

In the bedroom, things became “hot and heavy,” von Ehlinger said, and he stepped away to disrobe behind his closet door, carefully hanging up his suit jacket, tie and slacks, before returning to the bed. At his suggestion, Doe briefly performed oral sex, he said. He also denied carrying a gun that night, and said he seldom carries one.

“Very rarely, and certainly not with a suit on,” von Ehlinger said.

But while under questioning from Farley, he acknowledged that he described the events of that night differently in statements drafted by two different attorneys he previously hired to represent him. In those statements, he said he and Doe took each other’s clothes off.

He also said he generally carried concealed weapons when he did carry guns, most often a small handgun that he would place in the front pocket of his jeans or suit pants.

Earlier this week, jurors heard from investigators and a nurse who performed a rape exam. They testified that Doe reported being pinned down while von Ehlinger forced her to perform oral sex, and that she knew he frequently carried a handgun and had placed it on a dresser near the bed at the time of the assault. A nurse also testified that Doe had a “goose egg” on the back of her head from striking the wall or a headboard while trying to jerk her head away from von Ehlinger’s grip. 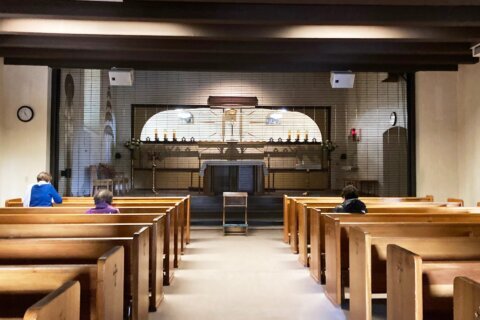