NEW YORK (AP) — When smoke bombs and bullets were unleashed on a subway full of morning commuters as it crawled toward a stop in Brooklyn, the train’s driver, David Artis, couldn’t hear the shots.

His first indication something was wrong was when passengers crowded near the door to his operator’s compartment to report chaos, one car back.

Artis said after a moment of shock, his thoughts quickly shifted from, “Oh my God!” to concern for his passengers. He leaned on his emergency training.

“Then it kicked in. Get them out,” he said Friday after he and fellow transit workers were honored by the mayor for their response to Tuesday’s shooting.

In a few minutes of lightning-quick decisions, Artis and train conductor Raven Haynes radioed in the attack, threw open the train doors and evacuated all of the passengers to another train on the same platform, then began getting aid to the wounded.

Photos and video taken by passengers captured the pair calmly but authoritatively herding stunned commuters onto the other train, which sped away.

Adams, who appeared at the City Hall ceremony virtually because he is isolating after having tested positive for COVID-19, had the workers presented Friday with proclamations to honor them for their heroism.

The ceremony came a day after the man authorities say was responsible for the carnage, Frank James, made an initial court appearance in a federal courthouse a few stops up the line from where the attack took place.

Prosecutors say he dressed as a construction worker and set off smoke grenades then pulled a handgun and fired 33 times, reloading once before his gun jammed.

The subway workers said that amidst the chaos, they didn’t see the gunman in the crowd and were just focused on getting people out.

Haynes, the conductor, said she didn’t feel any fear, having worked at an airport before joining the Metropolitan Transportation Authority several years ago and was already used to reacting to unpredictable situations.

“I can’t stress enough the importance of having a stoic attitude in a moment of chaos. You having a calm demeanor helps your passengers become calm, which helps them get out as safely and quickly as possible,” she said.

The shooting victims ranged in age from 16 to 60. Most of the wounds were to the legs, back and buttocks. A 16-year-old boy was shot in the hand. They are all expected to survive.

As the wounded passengers limped on to the platform, several knelt to assist the injured. One took off a shirt to create a tourniquet for someone shot in the leg.

Artis said that when he checked the subway car to ensure it was empty, he found blood on the floor, luggage the gunman left behind and bullet casings, which he said he immediately reported to the transit operators so police could be called.

Haynes described the moment she took in the scene, just after directing the passengers to escape.

“I finally looked down toward the front of the train and I saw the whole entire second car engulfed in smoke, along with the whole north side of the platform,” she said.

Investigators said that in the confusion, James slipped away on the rescue train with the other passengers, exiting one station down having ditched his construction worker outfit and helmet.

He was arrested a day later in Manhattan after a citywide manhunt that ended shortly after he called a police tip line and gave his location.

The NYPD said Friday that a $50,000 reward for information leading to James’ capture would be split evenly among five people whose tips it said “contributed directly to the arrest.” Because the tip process is anonymous, the department did not release the names of the people receiving the reward money, which was contributed by the New York City Police Foundation, a nonprofit supporting the NYPD’s work, the MTA, and the transit workers union.

So much is yet unknown about the motives behind Tuesday’s shooting, as the suspect’s previous brushes with the law come under scrutiny.

Among his first contacts with law enforcement was when he was fired from his maintenance job at Bridgeway Behavioral Health Services in Elizabeth, New Jersey, where he had been a client more than 15 years ago, the organization’s chief executive officer said in a statement.

“At the time of his termination, we referred Mr. James for additional mental health services, and contacted the Elizabeth, New Jersey police department who conducted their own investigation. Since that time he has not been engaged with our organization,” said Cory Storch, Bridgeway’s chief executive officer.

“This devastating incident highlights the urgent need to increase access to mental health treatment and follow-up services for those in crisis so that future acts of violence may be avoided,” Storch said.

James was ordered jailed without bail. At the request of James’ lawyers, Magistrate Roanne Mann said she would ask for James to get “psychiatric attention.”

Hourari Benkada, a passenger who was shot in the leg, told The Associated Press in an interview that he was just feet away from the gunman.

Benkada said he was listening to music on his headphones when smoke began filling the car and he thought it was a small fire.

But the smoke “kept escalating to black, black smoke like 9/11,” he said, “and the whole train was pitch-black.”

Benkada said he heard gunshots and screams and he tried to shield a pregnant woman from getting hit during the mayhem, and as people pushed forward, a gunshot tore into his knee.

Investigators were scouring dozens of videos that James posted on social media as they work to determine a motive for the shooting. The videos include profanity-filled diatribes about racism, society’s treatment of Black people, homelessness and violence.

James, a New York City native, also discussed his history of psychiatric treatment and complained about how New York’s mayor is dealing with homeless people on subways and with gun violence. He also talked about shooting people, prosecutors noted in court papers.

Investigators say James, who recently left Milwaukee and was living at a short-term rental in Philadelphia, rented a U-Haul van in Philadelphia and drove it to New York City hours before the shooting. 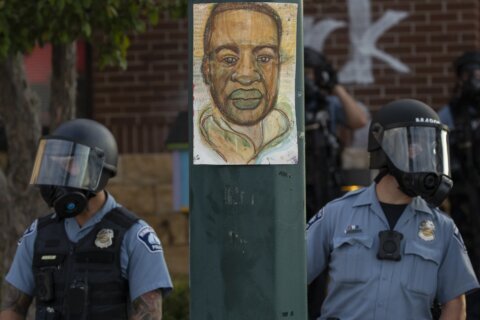