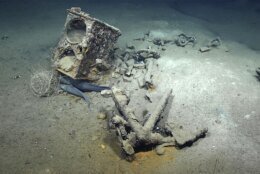 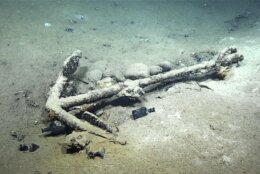 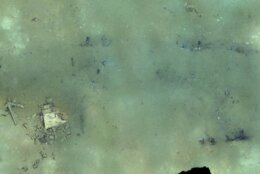 Roughly 15 years before Herman Melville introduced the world to Moby Dick, a whaling ship from Massachusetts sank near the mouth of the Mississippi River.

Nearly 190 years later, experts say, it’s still the only whaler known to have gone down in the Gulf of Mexico, where the threat of enslavement at Southern ports posed a risk for Black and mixed-race men who often were part of whaling crews.

Researchers checking out odd shapes during undersea scanning work on the sandy ocean floor believe they’ve finally found the shipwreck about 70 miles (113 kilometers) offshore from Pascagoula, Mississippi. It was documented in February by remotely operated robots in about 6,000 feet (1,829 meters) of water.

Not much is left of the two-masted wooden brig thought to be Industry, a 65-foot-long (20-meter-long) whaler that foundered after a storm in 1836. An old news clipping found in a library shows its 15 or so crew members were rescued by another whaling ship and returned home to Westport, Massachusetts, said researcher Jim Delgado of SEARCH Inc.

Melville’s “Moby-Dick; or, The White Whale,” published in 1851, told the story of American whaling from a Northeastern view. The discovery of Industry shows how whaling extended into a region where relatively little is known about whaling despite the Gulf’s extensive maritime history.

“The Gulf is an undersea museum of some incredibly well-preserved wrecks,” said Delgado of SEARCH Inc., who a few years ago helped identify the remains of the last known U.S. slave ship, the Clotilda, in muddy river waters just north of Mobile, Alabama.

The find also sheds light on the way race and slavery became entangled in the nation’s maritime economy, said historian Lee Blake, a descendant of Paul Cuffe, a prominent Black whaling captain who made at least two trips aboard the Industry.

Southern slave owners felt threatened by mixed-race ship crews coming into port, she said, so they tried to prevent enslaved people from seeing whites, Blacks, Native Americans and others, all free and working together for equal pay.

“There were a whole series of regulations and laws so that if a crew came into a Southern port and there were a large number of mixed-raced or African American crew members on board, the ship was impounded and the crew members were taken into custody until it left,” said Blake, president of the New Bedford Historical Society in Massachusetts. Black crew members also could be abducted and enslaved, she said.

Images of Industry captured by NOAA Ocean Exploration aboard the research ship Okeanos Explorer show the outline of a ship along with anchors and metal and brick remnants of a stove-like contraption used to render oil from whale blubber at sea, elements Delgado described as key evidence that the wreck was a whaling vessel.

The Industry photos pale in comparison to those recently released of Endurance, which sank in 10,000 feet (3,048 meters) of frigid Antarctic water a century ago and is incredibly well preserved. Bottles believed to date to the early 1800s are visible around Industry, but no ship’s nameplate; what appears to be modern fishing line lies near the metal tryworks used to produce oil from whale fat.

The Gulf was a rich hunting ground for sperm whales, which were especially valuable for the amount and quality of their oil, before the nation’s whaling industry collapsed in the late 19th century, said Judith Lund, a whaling historian and former curator at the New Bedford Whaling Museum in Massachusetts.

“In the 1790s there were more whales than they could pluck out of the Gulf of Mexico,” she said in an interview.

While at least 214 whaling voyages ventured into the Gulf, Lund said, ships from the Northeast rarely made extended port calls in Southern cities like New Orleans or Mobile, Alabama, because of the threat to crew members who weren’t white. That may may have been a reason the whaling ship that rescued Industry’s crew took the men back to Massachusetts, where slavery was outlawed in the 1780s, rather than landing in the South.

‘’The people who whaled in the Gulf of Mexico knew it was risky to go into those ports down there because they had mixed crews,” said Lund.

Reeves is a member of AP’s Race and Ethnicity team.