Internal White House records from the day of the attack on the U.S. Capitol that were turned over to the House select committee show a gap in President Donald Trump's phone logs of seven hours and 37 minutes, including the period when the building was being violently assaulted.
Listen now to WTOP News WTOP.com | Alexa | Google Home | WTOP App | 103.5 FM

Internal White House records from the day of the attack on the U.S. Capitol that were turned over to the House select committee show a gap in President Donald Trump’s phone logs of seven hours and 37 minutes, including the period when the building was being violently assaulted, according to documents obtained by CBS News’ chief election & campaign correspondent Robert Costa and The Washington Post’s associate editor Bob Woodward.

The lack of an official White House notation of any calls placed to or by Trump for 457 minutes — from 11:17 a.m. to 6:54 p.m. — on Jan. 6, 2021 means there is no record of the calls made by Trump as his supporters descended on the U.S. Capitol, battled overwhelmed police and forcibly entered the building, prompting lawmakers and Vice President Mike Pence to flee for safety.

The 11 pages of records — which consist of the president’s official daily diary and the White House switchboard call log — were turned over by the National Archives earlier this year to the House select committee investigating the Jan. 6 attack.

The records show that Trump was active on the phone for part of the day, documenting conversations that he had with at least eight people in the morning and 11 people that evening. The gap also stands in stark contrast to the extensive public reporting about phone conversations he had with allies during the attack. 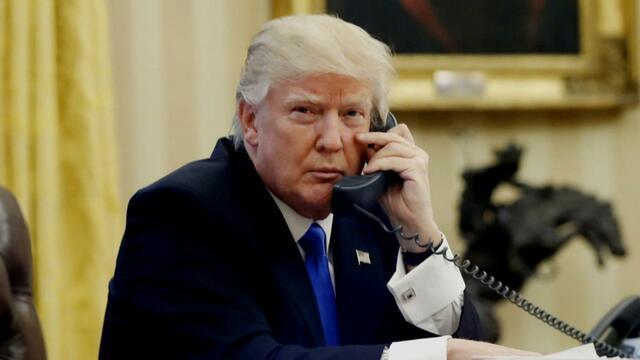 The chairman of the Jan. 6 House select committee, Rep. Bennie Thompson, Democrat of Mississippi, called the reported gap in the log “concerning.”

“Obviously, there is not a second in the day that the president of the United States is not on record somewhere,” Thompson told CBS News on Tuesday after a White House bill signing event. He said the committee would see “if we can piece it together.”

“Having a record of what the president was doing on that day is absolutely vital to the work of the committee,” Thompson added.

Thompson also said that the committee does not yet have any evidence that there were calls the president had made or received in that time period, but “if the Capitol of the United States is being overrun, somebody made some calls. And we just have to find them.”

The House panel is now investigating whether Trump communicated that day through backchannels, phones of aides or personal disposable phones, known as “burner phones,” according to two people with knowledge of the probe, who, like others interviewed for this report, spoke on the condition of anonymity to discuss sensitive information. The committee is also scrutinizing whether it received the full log from that day.

The records show that former White House chief strategist Stephen K. Bannon — who said on his Jan. 5 podcast that “all hell is going to break loose tomorrow” — spoke with Trump twice on Jan. 6.

In a statement Monday night, Trump said, “I have no idea what a burner phone is, to the best of my knowledge I have never even heard the term.”

But former Trump national security adviser John Bolton said in an interview Tuesday, after the CBS News-Washington Post reporting had been published, that he recalls Trump using the term “burner phones” in several discussions and that Trump was aware of its meaning.

Bolton said he and Trump have spoken about how people have used “burner phones” to avoid having their calls scrutinized.

A Trump spokesperson said that Trump had nothing to do with the records and had assumed any and all of his phone calls were recorded and preserved.

For more, read The Washington Post story co-written by Costa and Woodward.

Ed O’Keefe and Arden Farhi contributed to this report.