Arkansas deputy convicted in teen’s death, gets year in jail

CABOT, Ark. (AP) — A former Arkansas deputy was convicted Friday of negligent homicide and sentenced to a year in jail for fatally shooting an unarmed white teenager whose death last year drew the attention of national civil rights leaders.

Jurors acquitted Michael Davis of the more serious offense of manslaughter while finding him guilty of the misdemeanor charge in the death of 17-year-old Hunter Brittain during a June 23 traffic stop outside Cabot, a city of about 26,000 people roughly 30 miles (48 kilometers) northeast of Little Rock.

The maximum jail term that Davis, a former sergeant with the Lonoke County sheriff’s office, faced was one year. Manslaughter is a felony for which he would have faced between three and 10 years in prison. The Arkansas Democrat-Gazette reported that Davis also was sentenced to a $1,000 fine.

Davis, who is white, told investigators he shot Brittain once in the neck during the stop outside an auto repair shop after the teen exited his truck and reached into the bed of the pickup while failing to comply with Davis’ commands to show his hands, according to the arrest affidavit. A passenger and another witness testified they never heard Davis tell the teen to show his hands.

After the verdict was announced, Brittain’s family and friends chanted “justice for Hunter” outside the Army National Guard facility that was used for the trial, which began Tuesday.

Rebecca Payne, Brittain’s grandmother, said family members wanted the deputy convicted of the felony to ensure he could not serve as a law enforcement officer again.

“Now what’s going to happen? Are people going to have to fear for their lives again?” she told reporters.

Davis was fired by Lonoke County Sheriff John Staley for not turning on his body camera until after shooting Brittain. The footage, presented at the trial, shows only the moments after it happened.

The passenger in Brittain’s truck said he and the teen had been working on the pickup’s transmission. Brittain’s family members have said he was grabbing a container that held antifreeze to place behind the truck’s wheel to stop it from rolling backward. Investigators found no evidence of firearms in or near the truck.

Emotionally recounting the shooting, Davis testified Thursday that he thought the teen was grabbing for a gun.

“I didn’t get into this job to kill people,” Davis said.

Attorneys Ben Crump and Devon Jacob, who represent Brittain’s family, criticized the sheriff for not firing Davis over the shooting itself. The civil rights attorneys, who also represented George Floyd’s family after Minneapolis police killed him in May 2020, said: “Hunter deserved better.”

“The jury’s decision is a declaration that an Arkansas law enforcement officer, in full uniform, unlawfully killed Hunter Brittain,” the attorneys said in a written statement.

Robert Newcomb, Davis’ attorney, said he was pleased jurors didn’t find his client guilty of manslaughter but planned to challenge the standard they used to determine whether he was negligent.

“The police officer has a lot more situational awareness of a danger than maybe your or I would be aware of,” Newcomb told The Associated Press in a telephone interview.

The sheriff said he respected the jury’s decision.

“As I have said since day one, this was a tragic event and we all need to continue praying for those involved,” Staley said in a statement posted on his office’s Facebook page.

Brittain was eulogized last year by the Rev. Al Sharpton, as well as Jacob and Crump. They said the teen’s death highlighted the need for interracial support for changes in policing. 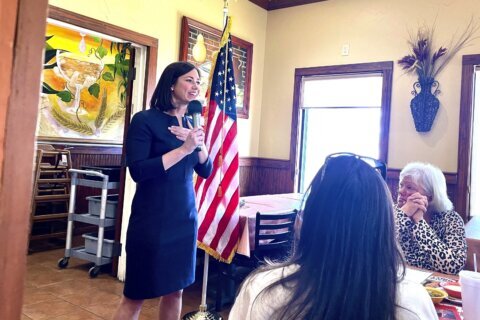