American journalist shot and killed by Russian forces in Ukraine

An American journalist was killed and another journalist was wounded by Russian forces in the town of Irpin outside the capital of Kyiv on Sunday, Ukrainian police said.
Listen now to WTOP News WTOP.com | Alexa | Google Home | WTOP App | 103.5 FM

Washington — An American journalist was killed and another was wounded by Russian forces in the town of Irpin outside the capital of Kyiv as they were traveling to film refugees, Ukrainian police said Sunday.

Brent Renaud, a 50-year-old filmmaker, was killed when Russian troops opened fire, according to Andriy Nebytov, the head of Kyiv’s regional police force. Nebytov posted a graphic photo purportedly of Renaud’s body on Facebook, as well as pictures of his American passport and media credentials issued by The New York Times.

A spokeswoman for the Times said Renaud was “a talented filmmaker who had contributed to The New York Times over the years,” most recently in 2015, but he “was not on assignment for any desk at The Times in Ukraine.” TIME issued a statement later Sunday confirming that Renaud had been “in the region working on a TIME Studios project focused on the global refugee crisis.”

Documentary filmmaker Juan Arredondo was injured in the attack, according to local reports and a video posted by a spokeswoman for a public hospital in Kyiv. Arredondo, who was lying on a hospital gurney, said he and Renaud were on their way to film people leaving Kyiv when they crossed a checkpoint and came under fire.

“Somebody offered to take us to the other bridge, and we crossed a checkpoint, and they started shooting at us. So the driver turned around, and they kept shooting, two of us. My friend is Brent Renaud, and he’s been shot and left behind,” said Arredondo, who is also American. “I saw him being shot in the neck, and we got split, and I got pulled.”

Ukrainian President Volodymyr Zelensky honored Renaud as a “talented and brave journalist” in a letter to Renaud’s family on Monday. Zelensky wrote that Renaud “lost his life while documenting human tragedy, devastation and suffering of the millions of Ukrainians.”

“The people of Ukraine, who are fighting against the Russian regime to defend their Homeland and democracy in the world, are mourning with you,” Zelensky said. “We are thankful to Brent for his professionalism and commitment to the values of compassion, ethics and justice.”

The State Department confirmed Renaud’s death in a statement later Sunday, saying it is “offering all possible consular assistance” to his family.

“We offer our sincerest condolences to his family on their loss,” a spokesperson said.

Nebytov, the Kyiv police chief, wrote that Renaud “paid [with] his life for trying to highlight the aggressor’s ingenuity, cruelty and ruthlessness,” according to an automated translation of his Facebook post.

Renaud and his brother Craig Renaud have reported from a number of global hotspots over the past two decades, including Iraq, Afghanistan and Egypt, according to a biography on their website. The pair won a Peabody Award in 2015 for an eight-part documentary for Vice News about a school in Chicago for students with severe emotional issues. 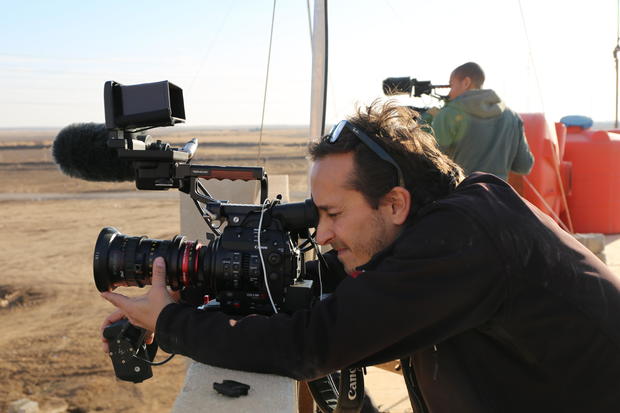 Brent Renaud filming in Iraq in 2016.

White House national security adviser Jake Sullivan called reports of Renaud’s death “shocking and horrifying,” telling “Face the Nation” on Sunday that the U.S. and its allies would impose “appropriate consequences” against Russia for the killing.