LOUISVILLE, Colo. (AP) — Last week’s Colorado wildfire caused at least $513 million in damage and destroyed nearly 1,100 homes and structures, officials said Thursday as they updated the toll of property lost in the most destructive wildfire in state history.

Boulder County released the new totals after further assessing the suburban area located between Denver and Boulder where entire neighborhoods were charred. It’s the first estimate of economic damage for the Dec. 30 blaze.

Authorities previously estimated that at least 991 homes and other buildings were destroyed. Two people are missing, though officials have found partial human remains at one location.

President Joe Biden was scheduled to survey the damage on Friday.

Investigators are still trying to determine what caused the wind-whipped wildfire, which forced thousands to flee on very little notice. The inferno erupted following months of drought and fed on bone-dry grassland surrounding fast-growing development in the area near the Rocky Mountain foothills.

Experts say similar events will become more common as climate change warms the planet and suburbs grow in fire-prone areas. Ninety percent of Boulder County is in severe or extreme drought, and it hadn’t seen substantial rainfall since mid-summer.

The fire, which spanned 9.4 square miles (24 square kilometers), ranks as the most destructive in state history in terms of homes and other structures destroyed and damaged. A 2013 fire outside Colorado Springs destroyed 489 homes and killed two people.

In 2020, Colorado also suffered its three largest wildfires in recorded history as a prolonged drought holds its grip on the Western U.S.

The new totals include destroyed barns, sheds and other outbuildings, but the vast majority were residences, Boulder County officials said. The worst damage was in and around Louisville and Superior, neighboring towns about 20 miles (32 kilometers) northwest of Denver with a combined population of 34,000.

Seven commercial structures were destroyed and 30 damaged, the county said. Losses to commercial buildings were still being calculated.

Federal and state investigators have interviewed dozens of people as they work to determine what started the fire on a day when winds surpassed 100 mph (160 mph). Their efforts are focused on an area near Boulder where a passer-by captured video of a burning shed on the day the fire began.

Disaster experts say the number of possible casualties is remarkably low given how fast the fire ripped through subdivisions and especially considering a public alert system did not reach everyone. Boulder County officials said Thursday that emergency alerts were sent to more than 24,000 contacts. Some 35,000 people fled their homes.

One of the destroyed houses was owned by Bill Stephens, the pastor at Ascent Community Church in Louisville, who said Thursday that at least 17 members of his congregation also lost their homes in the fire. Stephens was at a disaster assistance center picking up a $500 check from the Red Cross to help buy necessities.

The church itself, a renovated former Sam’s Club building, survived the fire but suffered extensive smoke damage. Church volunteers spent the day removing holiday decorations that reeked of smoke. Industrial fans and filters churned throughout the sanctuary to help remove the smell.

Although the congregation won’t be able to hold services at the church for several weeks, Stephens said the wildfire will not stop them from worshiping. They’ll hold Sunday services at a local hotel until the church is cleaned up and ready to reopen.

“I’m trying my best to take care of the congregation. At the same time, we’re dealing with the fact that our own house is gone,” Stephens said. “It’s just a community that’s all been rocked by this.” 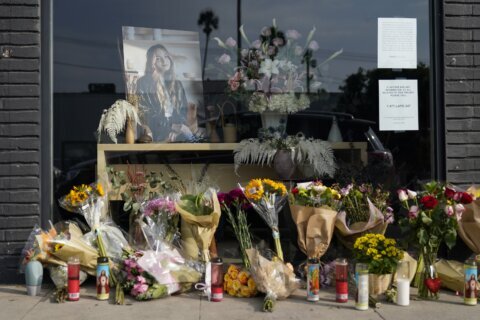 Police: Man arrested in slaying of LA woman, 24, at store