At least 19 people, including nine children, died in a fire Sunday at a Bronx apartment building in one of the worst blazes in New York City in decades, officials said.
Listen now to WTOP News WTOP.com | Alexa | Google Home | WTOP App | 103.5 FM
(1/21) 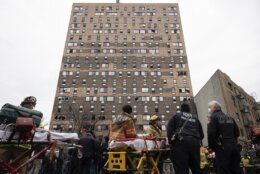 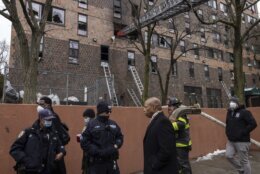 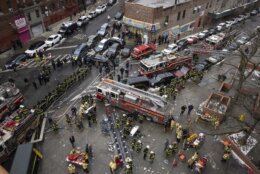 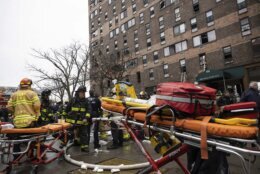 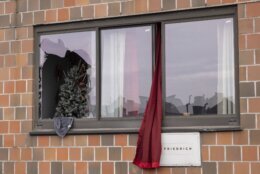 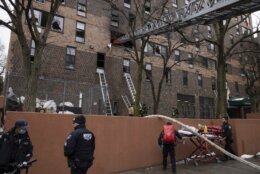 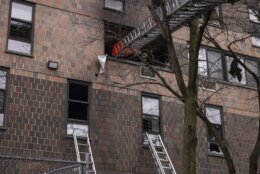 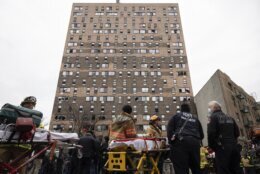 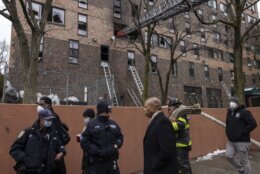 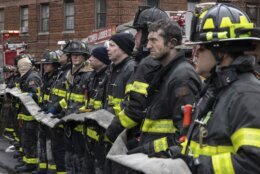 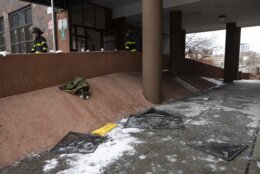 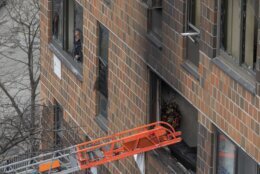 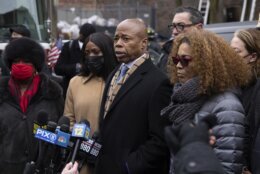 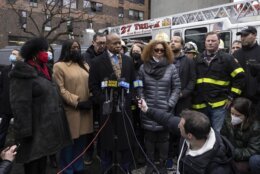 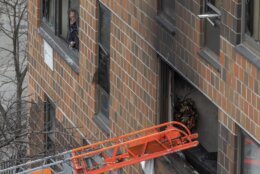 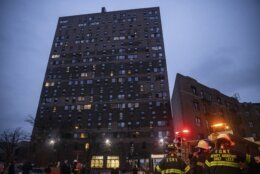 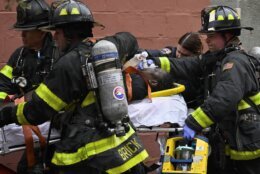 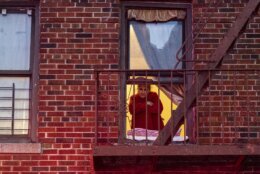 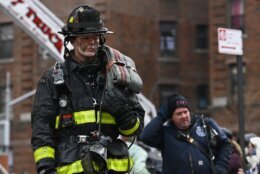 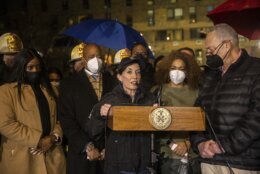 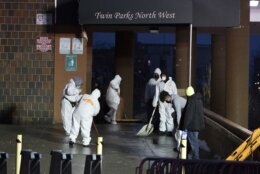 Trapped residents broke windows for air and stuffed wet towels under doors as smoke rose from a lower-floor apartment where the fire started. Survivors told of fleeing in panic down darkened hallways and stairs, barely able to breathe.

Multiple limp children were seen being given oxygen after they were carried out. Evacuees had faces covered in soot.

Firefighters found victims on every floor, many in cardiac and respiratory arrest, said Fire Commissioner Daniel Nigro. Some could not escape because of the volume of smoke, he said.

Some residents said they initially ignored wailing smoke alarms because false alarms were so common in the 120-unit building, built in the early 1970s as affordable housing.

More than five dozen people were hurt and 13 were hospitalized in critical condition. Nigro said most of the victims had severe smoke inhalation.

“Their oxygen tanks were empty and they still pushed through the smoke,” Adams said.

Investigators said the fire, triggered by the electric heater, started in a duplex apartment on the second and third floors of the 19-story building.

The flames didn’t spread far — only charring the one unit and an adjacent hallway. But the door to the apartment and a door to a stairwell had been left open, letting smoke quickly spread throughout the building, Nigro said.

New York City fire codes generally require apartment doors to be spring-loaded and slam shut automatically, but it was not immediately clear whether this building was covered by those rules.

Building resident Sandra Clayton grabbed her dog Mocha and ran for her life when she saw the hallway fill with smoke and heard people screaming, “Get out! Get out!”

Clayton, 61, said she groped her way down a darkened stairway, clutching Mocha. The smoke was so black she couldn’t see, but she could hear neighbors wailing and crying nearby.

“I just ran down the steps as much as I could but people was falling all over me, screaming,” Clayton recounted from a hospital where she was treated for smoke inhalation.

In the commotion, her dog slipped from her grasp and was later found dead in the stairwell.

About 200 firefighters responded to the building on East 181st Street around 11 a.m.

Jose Henriquez, an immigrant from the Dominican Republic who lives on the 10th floor, said the building’s fire alarms would frequently go off, but would turn out to be false.

“It seems like today, they went off but the people didn’t pay attention,” Henriquez said in Spanish.

He and his family stayed, wedging a wet towel beneath the door once they realized the smoke in the halls would overpower them if they tried to flee.

Luis Rosa said he also initially thought it was a false alarm. By the time he opened the door of his 13th-floor apartment, the smoke was so thick he couldn’t see down the hallway. “So I said, OK, we can’t run down the stairs because if we run down the stairs, we’re going to end up suffocating.”

The children who died were 16 years old or younger, said Stefan Ringel, a senior adviser to the mayor. Adams said at a news conference that many residents were originally from the West African nation of Gambia. Many survivors were brought to temporary shelter in a nearby school.

The drab, brown apartment building looms over an intersection of smaller, aging brick buildings on Webster Avenue, one of the Bronx’s main thoroughfares.

By Sunday afternoon, all that remained visible of the unit where the fire started was a gaping black hole where the windows had been smashed.

“There’s no guarantee that there’s a working fire alarm in every apartment, or in every common area,” U.S. Rep. Ritchie Torres, a Democrat who represents the area, told the AP. “Most of these buildings have no sprinkler system. And so the housing stock of the Bronx is much more susceptible to devastating fires than most of the housing stock in the city.”

Nigro and Torres both compared the fire’s severity to a 1990 blaze at the Happy Land social club where 87 people were killed when a man set fire to the building after getting into an argument with his former girlfriend and being thrown out of the Bronx club.

Sunday’s death toll was the highest for a fire in the city since the Happy Land fire, other than the Sept. 11 terror attacks.

It was also the deadliest fire at a U.S. residential apartment building in years. In 2017, 13 people died in an apartment building, also in the Bronx, according to data from the National Fire Protection Association.

That fire started with a 3-year-old boy playing with stove burners and also spread because the door to an apartment that lacked a closing mechanism had been left open. The fire led to several changes in New York City, including having the fire department create fire safety education plans for children and parents.

Sunday’s fire happened just days after 12 people, including eight children, were killed in a house fire in Philadelphia. In 1989, a Tennessee apartment building fire claimed the lives of 16 people. 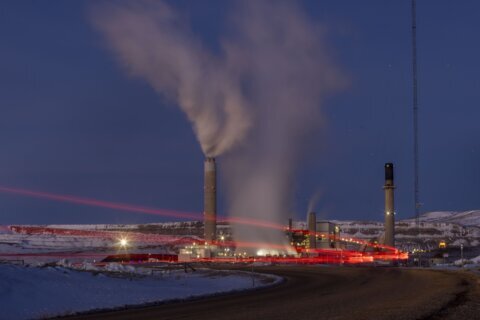