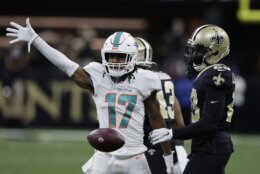 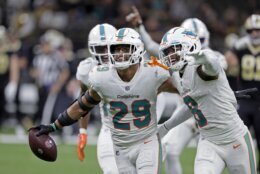 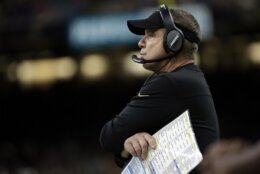 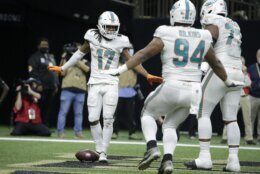 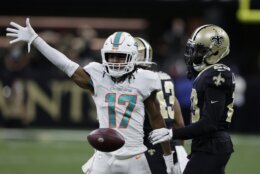 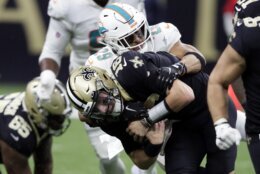 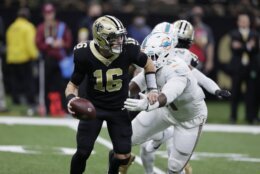 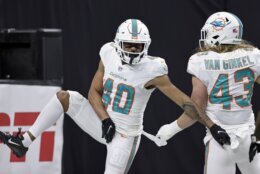 Miami also got a big lift from rookie sensation Jaylen Waddle to outclass New Orleans on both sides of the ball.

Waddle caught 10 passes for 92 yards and touchdown in his return from the COVID-19 list, and the Dolphins beat the short-handed Saints 20-3 on Monday night, becoming the first NFL team to win seven straight after losing seven in a row.

“This team stuck together, really the entire year,” said third-year Miami coach Brian Flores, who improved to 19-7 in games played after October. “Obviously, we dealt with a lot of adversity early in the year. It revealed a lot — revealed the character of the guys in our locker room.

“Our guys kept fighting, they kept sticking together, they worked hard,” Flores added.

Nik Needham intercepted Book and returned the ball 28 yards for a touchdown to help Miami become one of four 8-7 teams — along with Baltimore, the Los Angeles Chargers and Las Vegas — in contention for one of the final playoff spots in the AFC.

Book started for the Saints (7-8) because of a COVID-19 outbreak that took 16 players off the active roster, including starting QB Taysom Hill and veteran backup Trevor Siemian.

“Rookie quarterback — we mixed up some looks on him,” Needham said. “Had him a little confused out there and I think that played a big part.”

With the Saints’ offensive line missing three starters, including both tackles, Book completed 12 of 20 passes for 135 yards.

“Just keeping him upright tonight was a challenge,” Saints coach Sean Payton said. “The first interception was a throw he’ll want back, but that’s a tough position for him to be in.”

The Saints’ defense helped keep the game within reach until Waddle scored on a 1-yard shovel pass from Tua Tagovailoa to make it 17-3 with 5:10 left in the third quarter.

Tagovailoa, who entered the game with an NFL best 69.9% completion rate, connected on 19 of 26 passes (73.1%) for 198 yards and the short TD. He also was intercepted by Marshon Lattimore.

Waddle missed Miami’s previous game because of a positive COVID-19 test. He has 96 catches this season, eclipsing New Orleans’ Michael Thomas for the second-most receptions by a rookie, and leaving him five short of Anquan Boldin’s rookie record of 101 catches in 2003.

Waddle said “it’ll obviously be pretty cool” if he breaks the record.

“The NFL is a special league, so anything in this league, to have a record is always big,” he said.

Book got a roar of encouragement from the crowd when he first took the field and and Saints fans were cheering again two plays later when he completed his first career pass. Then they let out a collective gasp on his second pass — Needham’s pick-6.

Needham said a “max blitz” helped set up his first interception for a score at any level of football.

“We knew the ball had to come out quick so I was just staring at the quarterback and right when he said, ‘Hut,’ he was looking at the slot,” Needham recalled. “I think the ball got tipped and it landed right in my hands.”

Book’s next two series also lasted three plays each and ended on sacks. New Orleans didn’t get a first down until the second quarter. That drive lasted five plays.

The Saints finally moved the ball on their fifth series, needing just four plays to pick up three first downs. A roughing-the-passer penalty on a 12-yard completion to Alvin Kamara moved New Orleans to the Miami 23, setting up Brett Maher’s field goal to make it 10-3.

“Personally I got a lot to get better at,” Book said. “There’s things in my mind already that I want back but it felt good to be out there.”

Cam Jordan’s second sack of the game in the final minute of the second quarter forced Miami to try a 59-yard field goal, which Jason Sanders missed, keeping the Saints’ deficit at one touchdown at halftime.

The Dolphins’ eight sacks tied a team record for a game. They became the first team in the Super Bowl era to have that many sacks, score a defensive TD and hold an opponent under 200 total yards while allowing no TDs or third-down conversions. The Saints went 0 for 12 on third down.

Dolphins: Miami went into the game missing seven players because of COVID-19.

Saints: In addition to having 16 players removed from the active roster by positive COVID-19 tests, New Orleans scratched starting left tackle Terron Armstead, who was not yet ready to return from a knee injury that also kept him out the previous week. Reserve right tackle Caleb Benenoch was treated on the field for an injury in the fourth quarter. Receiver Tre’Quan Smith left the game with a chest injury.

Dolphins: Visit Tennessee on Sunday before closing out the regular season at home against AFC East rival New England.