A few dozen survivors of Pearl Harbor are expected to gather Tuesday at the site of the Japanese bombing 80 years ago to remember those killed in the attack that launched the U.S. into World War II.
Listen now to WTOP News WTOP.com | Alexa | Google Home | WTOP App | 103.5 FM
(1/7) 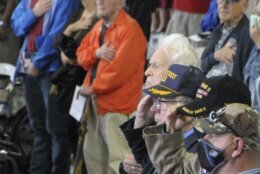 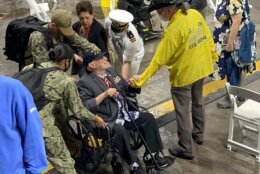 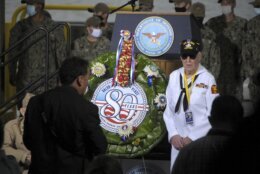 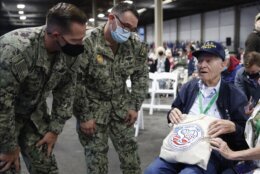 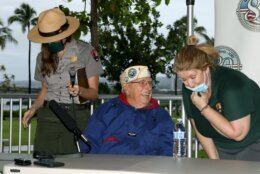 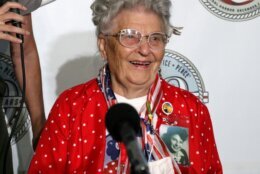 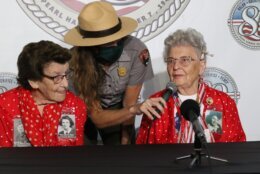 PEARL HARBOR, Hawaii (AP) — A few dozen survivors of Pearl Harbor and other veterans gathered Tuesday at the site of the bombing 80 years ago to remember those killed in the attack by Japan that launched the U.S. into World War II.

The USS Chung-Hoon, a guided missile destroyer, passed in front of the pier with its sailors “manning the rails,” or lining the ship’s edge, to honor the World War II veterans present.

David Russell, a 101-year-old from Albany, Oregon, who survived the attack while on the USS Oklahoma, stood to salute to the destroyer on behalf of the veterans.

Herb Elfring, 99, said he was glad to return to Pearl Harbor considering he almost didn’t live through the aerial assault.

“It was just plain good to get back and be able to participate in the remembrance of the day,” Elfring told reporters over the weekend.

Elfring was in the Army, assigned to the 251st Coast Artillery, part of the California National Guard on Dec. 7, 1941. He recalled Japanese planes flying overhead and bullets strafing his Army base at Camp Malakole, a few miles down the coast from Pearl Harbor.

Elfring, who lives in Jackson, Michigan, said he has returned to Hawaii about 10 times to attend the annual memorial ceremony hosted by the Navy and the National Park Service.

About 30 survivors and about 100 other veterans of the war joined him this year. Veterans stayed home last year due to the coronavirus pandemic and watched a livestream of the event instead. Most attendees this year wore masks.

They observed a moment of silence at 7:55 a.m., the same minute the attack began decades ago.

Navy Secretary Carlos Del Toro recounted in his keynote address how Petty Officer 1st Class Joe George tossed a line to the USS Arizona that six men trapped by fire in the battleship’s control tower used to cross to his ship, the USS Vestal. Five of the six survived. Among them was Donald Stratton of Red Cloud, Nebraska, who died last year. Del Toro said he recently met with Stratton’s family.

“We sometimes talk about our victory in World War II as though it was inevitable. Only a matter of time. But there was nothing inevitable about one sailor’s decision to toss that line,” Del Toro said.

He said it took millions of individual acts of valor and courage at home and overseas to get the nation through the war.

David Dilks, 95, traveled to Hawaii from Hatfield, Pennsylvania, with his son-in-law. Dilks enlisted out of high school in 1944, going from playing basketball one day to serving in the Navy the next.

Dilks said his battleship, the USS Massachusetts, bombarded targets like Iwo Jima, Okinawa and the Philippines during the war.

He recalls one day in March 1945 when he and his shipmates were watching the movie “Stage Door Canteen” on the ship’s fantail when a loud noise interrupted the film. They then saw a Japanese kamikaze plane crash into the USS Randolph aircraft carrier next to them.

“We never had a movie up topside after that,” he said.

Sitting at Pearl Harbor on the 80th anniversary of the attack, he said he’s thinking in particular about those that died.

“All of the sailors and soldiers who fought here — you should be proud of them. But more proud of those who didn’t make it,” he said.

Several women who helped the war effort by working in factories have come to Hawaii to participate in the remembrance this year.

Mae Krier, who built B-17s and B-29s at a Boeing plant in Seattle, said it took the world a while to credit women for their work.

“And we fought together as far as I’m concerned. But it took so long to honor what us women did. And so of course, I’ve been fighting hard for that, to get our recognition,” said Krier, who is now 95. “But it was so nice they finally started to honor us.”

This year’s ceremony took place as a strong storm with extremely heavy rains hit Hawaii, flooding roads and downing power lines. The ceremony was conducted under a pier with a metal roof. Skies were overcast but it was not raining during the ceremony.