Adams, himself a former New York police captain, introduced Sewell on Wednesday as his barrier-breaking choice for one of the most high-profile and powerful jobs in his upcoming administration.

“She’s the woman for the job,” Adams declared as he appeared with Sewell at a news conference in her native Queens.

“She carried with her throughout her career a sledgehammer and she crushed every glass ceiling that was put in her way,” Adams said. “Today, she has crashed and destroyed the final one we need in New York City.”

Sewell, who serves as the Nassau County Police Chief of Detectives, will be the third Black person to serve as New York Police Department commissioner. The 49-year-old will replace Dermot Shea, who is retiring from the NYPD after 30 years, having spent the last two as commissioner. She’ll begin when Adams takes office Jan. 1.

Adams praised Sewell for her “emotional intelligence,” describing her as “calm, collected, confident” and someone who had risen through the ranks.

It has been decades since a Black person ran the NYPD, with Benjamin Ward and Lee Brown, who served in the 1980s and 1990s, preceding Sewell. She will inherit a police department in flux. The NYPD has struggled to keep crime down a few years after achieving record lows.

The rise, particularly in shootings and killings, is part of a national trend in the wake of the pandemic, but police officials have also blamed state reforms that eliminated pretrial detention for many charges. There is little evidence that the reforms have resulted in more crime.

Sewell said she will be “laser-focused on violent crime,” with a particular emphasis on gun crimes.

“We are in a pivotal moment in New York as our city faces the twin challenge of public safety and police accountability. They are not mutually exclusive,” Sewell said after Adams introduced her.

Adams, the cofounder of 100 Blacks in Law Enforcement Who Care, an advocacy group that sought criminal justice reform and spoke out against police brutality, has pledged new strategies to fight crime, including the return of foot patrols.

He has pushed back against progressive calls to defund the police and has defended the controversial stop-and-frisk police strategy as a useful tool that has been abused. He has also pledged to diversify the NYPD’s ranks.

Sewell on Wednesday reiterated that promise to diversify the force.

“I am mindful of the historic nature of this announcement as the first woman and only the third Black person to lead the NYPD in its 176-year history. I bring a different perspective, committed to make sure the department looks like the city it serves, and making the decision, just as Mayor-elect Adams did, to elevate women and people of color to leadership positions,” she said.

Sewell was named Nassau’s Chief of Detectives in September 2020 overseeing a staff of about 350 people. The NYPD has about 35,000 officers.

Adams acknowledged Sewell has been leading a much smaller force in her current role, but said Wednesday she helped make Nassau County one of the safest communities in the country.

Sewell has overseen Nassau County’s detectives, including its homicide squad and special victims squad, for about a year. Before that, she oversaw the department’s professional standards bureau and internal affairs, according to a report last year in Newsday.

She started with the department as a patrol officer in 1997 and worked her way up the ranks to become a precinct commander, to head the department’s bureau of major cases and to serve as the chief hostage negotiator.

The New York Post first reported the selection of Sewell on Tuesday night. 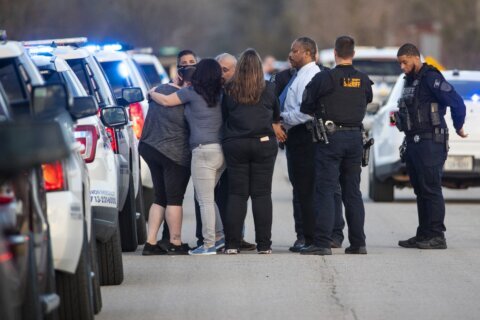