Residents in the town of Mayfield, Kentucky, among the hardest hit by last week's tornado, have dug themselves out of the rubble and begun burying their dead, but now face a daunting and long-term task: rebuilding.
Listen now to WTOP News WTOP.com | Alexa | Google Home | WTOP App | 103.5 FM
(1/1) 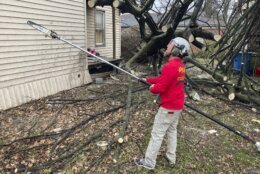 MAYFIELD, Ky. (AP) — Although his birthday is still a few days away, 60-year-old Harley Kelso knows what he’s getting from his sister.

The retired truck driver, whose home and car were battered by last week’s tornado — one of dozens that ripped across the South and Midwest, killing at least 90 people — said his sister is bringing chainsaws and her two sons to his home in hard-hit Mayfield to cut apart a tree that’s resting on his family’s minivan.

“I lost my car and the corner of my porch,” Kelso said, sporting a T-shirt that read World’s Greatest Papa. “I’m just glad everyone in the neighborhood survived.”

Such gratitude may sound odd in the aftermath of a long-track tornado that demolished huge parts of Mayfield, but it’s a common refrain these days in this tight-knit community of 10,000 people.

Even with his minivan crumpled under a giant tree, most of his front yard hanging from its roots, smashed windows and a home with no power or running water, Kelso says he’s well aware that things could have been worse — and resolute if not downright upbeat about the task ahead.

“I’m going to bring a hot breakfast to my daughter,” he said with a smile, clutching a bag of breakfast tacos dropped off by one of the dozens of volunteers combing the neighborhood, offering a hot meal or a cold drink.

President Joe Biden, who visited the community Wednesday and described the damage as some of the worst he’s seen, vowed the full support of the federal government to help the town rebuild.

Among the biggest and most pressing challenges facing Mayfield and other devastated communities is removing the mountains of debris that the storms turned homes and businesses into, Kentucky Emergency Management Director Michael Dossett said.

“This is going to be one of the largest pieces of the recovery,” Dossett said Thursday during a press conference at the state Capitol in Frankfort. “Debris removal is one of the most important pieces because it is part and parcel to rebuilding not just the city infrastructure, but for all of our homeowners.”

In neighborhoods across the city, yards and streets are filled with debris: downed tree limbs, shingles, mangled children’s toys, mud-caked clothes. Trees that haven’t been uprooted completely have had upper branches shorn off. Others have crashed into cars or homes.

Many houses have had roofs torn off or been pulled from their foundations. Others have been reduced to nothing more than a massive pile of bricks, insulation and splintered lumber.

In the center of town, heavy equipment operators rumbled through the back-and-forth task of clearing piles of rubble that covered entire blocks. At what was once a steam-cleaning business, volunteers sifted through piles of debris to salvage what they could. Several steam cleaners stood at the edge of the pile.

The damage and devastation in Mayfield is so severe that it could take years before the community returns to normal, said Chris Chiles, disaster response coordinator for the Danville, Virginia-based God’s Pit Crew, which has been aiding storm-ravaged communities for more than two decades.

“There’s a ton of work that needs to be done,” Chiles said. “I’ve been doing this for 14 years all over the country, and it’s hard to get much worse than this.

When a town that has lived through such a catastrophic event does finally get rebuilt and back on its feet, Chiles said, it’s often stronger and more close-knit than before.

“The loss of life is horrific, but sometimes neighbors don’t know each other and things like this bring people together,” he said.

Still, not everyone is prepared to rebuild.

Chris Eigenrauch, 49, whose home was among those badly battered by the storm, said the prospect of rebuilding an entire community is simply too daunting. He said he’s considering moving to neighboring Illinois, where several of his relatives live.

“It’s going to take months, if not years,” he said. “I just plan on leaving. For the ones who are staying, I hope God helps them rebuild.”

Kelso, who works 20 hours a week as a short-order cook, isn’t sure how long it will take to get his own home back to normal, let alone the devastated community. But his confidence is unwavering.

“This is a tough community,” he said. “We’ll come together.”