EXPLAINER: What charges did Jussie Smollett face at trial?

CHICAGO (AP) — The twists, turns and oddities of the legal saga surrounding Jussie Smollett’s claim in 2019 that he was the target of a racist and homophobic attack in Chicago culminated in a weeklong trial, which concluded with a jury convicting Smollett on five counts of disorderly conduct. Smollett was acquitted on a sixth count.

Initial charges brought in February 2019 that accused the former “Empire” actor of faking the assault were soon after tossed. But in February 2020, after a special prosecutor looked into the case, a new six-count indictment was filed.

Here’s a look at the charges Cook County jurors heard testimony about:

WHAT WERE THE CHARGES AGAINST SMOLLETT?

The 39-year-old was charged under Illinois’ disorderly conduct statute, which encompasses a wide range of offenses, from making prank 911 calls to placing harassing calls as a debt collector.

The charges were listed as class 4 felonies, which are among the least serious felonies in Illinois. But convictions can still carry potential prison time of up to three years.

Although Smollett was found guilty Thursday of five of the six counts, his lack of criminal history and the fact that no one was seriously hurt make actual time behind bars unlikely. It’s more likely that a judge would sentence him to probation and perhaps order him to perform community service.

“I’d be shocked if he spent one day in jail,” said Andrew Weisberg, a Chicago-based criminal attorney and a former Cook County prosecutor.

HOW UNIQUE IS IT FOR SUCH CHARGES TO BE BROUGHT?

The Smollett case was certainly unique in how it involved a star actor and in its sensational claims and counterclaims — first by Smollett, who is Black and gay, that he was the subject of an attack and then by police that he had made it all up.

While it is among the biggest disorderly conduct cases in Illinois history, it’s not the only such case to have made a splash in the news.

A Canadian, Robert Spearing, was charged with disorderly conduct in 2011 after Chicago police said he lied about being beaten and robbed of tickets to an Oprah Winfrey show. He concocted the story, even cutting his own forehead with a rock, to conceal from his wife that he never had any tickets. He pleaded guilty and did no time in prison.

Disorderly conduct charges for filing a false police report aren’t uncommon and are sometimes tied to insurance fraud. Last month, a man in the Chicago suburb of Wheaton was charged with disorderly conduct for allegedly lying to police that he had been robbed in a parking garage at gunpoint.

Weisberg says those who fib in initial reports to police are frequently quick to recant and often aren’t charged if they take it back immediately. After police accused him of lying, Smollett doubled down and insisted it was all true.

Smollett’s case stands out in that it got to trial at all, Weisberg added. In many cases, those accused of lying to police seek a plea deal or plead guilty without a deal.

WHY SIX COUNTS AGAINST SMOLLETT FOR THE SAME INCIDENT?

Each count of disorderly conduct represents an instance during Jan. 29, 2019, and then on Feb. 14, 2019, in which Smollett allegedly lied to police.

Count 1 accused him of telling responding Chicago Police Officer Muhammed Baig at around 2:45 a.m., some 45 minutes after the purported attack, that he was the victim of a hate crime. He said two attackers put a rope around his neck. Count 2 referred to Smollett telling the same officer he was a victim of a battery, describing attackers beating and pouring bleach on him.

Counts 3 and 4 stemmed from Smollett making the same claims but to a different officer, Kimberly Murray, later that morning, at just before 6 a.m.

Count 5 accused Smollett of again telling Murray at around 7:15 p.m. that he was the victim of a battery. Count 6 referred to Smollett reporting on Feb. 14, 2019, to detective Robert Graves that he’d been a victim of an aggravated battery.

Check out The AP’s complete coverage of the Jussie Smollett case. 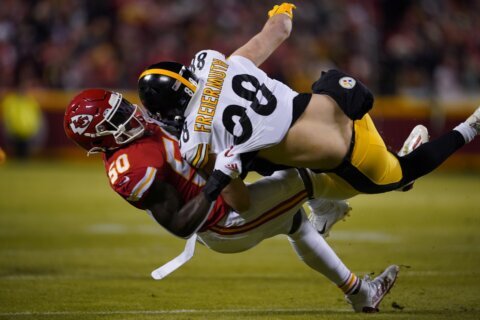