EXPLAINER: How does someone confuse a gun for a Taser?

The jury deliberating at Kim Potter’s manslaughter trial in the shooting death of Daunte Wright asked a judge whether the officer’s handgun could be freed from an evidence box so they could hold it.

Their question Tuesday went to the heart of the former police officer’s claim that she made a tragic mistake when she grabbed her gun, instead of her Taser, and shot Wright during a traffic stop April 11 in the Minneapolis suburb of Brooklyn Center.

Prosecutors had highlighted the differences in the look, feel and weight between Potter’s gun and Taser, and had promised jurors they would be able to handle them during deliberations.

Taser-gun mix-ups are rare but have happened in several states in recent years.

Here are some questions and answers about such incidents:

Experts agree that such incidents are rare and probably happen fewer than once per year throughout the U.S. A 2012 article published in the monthly law journal Americans for Effective Law Enforcement documented nine cases dating back to 2001 in which officers shot suspects with handguns when they said they meant to fire stun guns.

The phenomena of “weapons confusion” is well known in policing, according to the prosecution’s use-of-force expert, Seth Stoughton, a professor at the University of South Carolina School of Law. He testified that he knew of “fewer than 20” cases since Tasers were introduced in 1993 in which officers used their firearms instead. He said the manufacturer has taken steps to try to prevent such errors and it’s become an important part of the training officers get.

Reasons that have been cited include officer training, the way they carry their weapons and the pressure they feel during dangerous and chaotic situations. To avoid confusion, officers typically carry their stun guns on their weak sides, away from handguns holstered on their dominant hand’s side. That’s how Potter carried hers.

Jurors at Potter’s trial heard testimony from a state Bureau of Criminal Apprehension agent about the differences between the two weapons and how officers use them, with photographs to illustrate.

The Taser and gun also have different triggers, grips and safety mechanisms that must be engaged before firing, McGinnis testified. The Taser has a laser and LED lights that display before it is fired, which he demonstrated for the jury, while the handgun does not.

WHAT DOES THE DEFENSE SAY?

The defense brought in a use-of-force expert to testify that in chaotic situations like Wright’s traffic stop, a person’s ingrained training takes over.

Laurence Miller, a psychologist who teaches at Florida Atlantic University, said that the more someone repeats the same act, the less they have to think about it. He said that when a person learns a new skill, memory of an old skill might override that, resulting in an “action error” in which an intended action has an unintended effect.

”You intend to do one thing, think you’re doing that thing, but do something else and only realize later that the action that you intended was not the one you took,” he said.

“We are in a human business,” defense attorney Paul Engh said. “Police officers are human beings. And that’s what occurred.”

Bill Lewinski, an expert on police psychology and the founder of the Force Science Institute in Mankato, Minnesota, has used the term “slip and capture” errors to describe the phenomenon.

Lewinski, who has testified on behalf of police, has said officers sometimes perform the direct opposite of their intended actions under stress — that their actions “slip” and are “captured” by a stronger response. He notes that officers train far more often on drawing and firing their handguns than they do on using their stun guns.

Other experts are skeptical of the theory.

Alpert said a major factor in why officers mistakenly draw their firearms is that stun guns typically look and feel like a firearm.

In one of the best-known cases, a transit officer responding to a fight at a train station in Oakland, California, killed 22-year-old Oscar Grant in 2009. Johannes Mehserle testified at trial that, fearing Grant had a weapon, he reached for his stun gun but mistakenly pulled his .40-caliber handgun instead.

Mehserle was convicted of involuntary manslaughter and sentenced to two years in prison. His department paid $2.8 million to Grant’s daughter and her mother.

In Tulsa, Oklahoma, a white volunteer sheriff’s deputy, Robert Bates, said he accidentally fired his handgun when he meant to deploy his stun gun on an unarmed Black man, Eric Harris, who was being held down by other officers in 2015.

Bates apologized for killing Harris but described his deadly mistake as a common problem in law enforcement, saying “This has happened a number of times around the country. … You must believe me, it can happen to anyone.”

Bates was convicted of second-degree manslaughter and sentenced to four years in prison. Tulsa County ultimately agreed to pay $6 million to Harris’ estate to settle a federal civil rights lawsuit.

In 2019, a suburban St. Louis police officer, Julia Crews, said she meant to use her stun gun but mistakenly grabbed her service revolver and shot a suspected shoplifter, Ashley Hall, who suffered serious injuries. Crews resigned and was charged with second-degree assault. That was eventually dropped at Hall’s request after the victim and the former officer agreed to participate in restorative justice mediation. Separately, the city of Ladue agreed to a $2 million settlement with Hall. 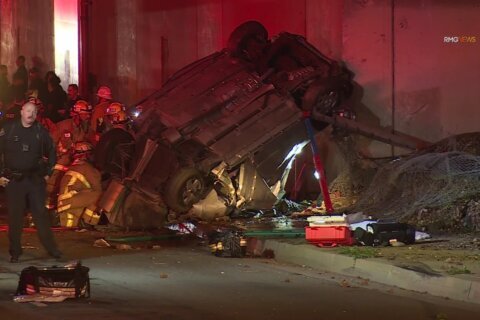