MADISON, Wis. (AP) — Republican Mark McCloskey, a candidate for the U.S. Senate in Missouri, was photographed Tuesday outside the Wisconsin courthouse where Kyle Rittenhouse was on trial for murder with two people flashing a sign associated with white supremacists.

McCloskey and his wife, Patricia, were both in Kenosha, Wisconsin, on Monday and Tuesday to show support for Rittenhouse. The McCloskeys gained national attention after they waved guns at racial injustice protesters who were marching in their gated St. Louis subdivision last summer.

They were among a group of people outside the courthouse, some in support of Rittenhouse and others opposed, who began to gather Monday during closing arguments. There were dozens of people outside on Tuesday as the jury spent all day deliberating the case before ending the day around 6 p.m. without reaching a verdict.

The McCloskeys pleaded guilty in June to misdemeanor charges after waving guns at protesters and were ordered to pay fines, but Mark McCloskey left the courthouse defiantly pledging to “do it again” if faced with the same circumstances. Both McCloskeys were pardoned by Republican Missouri Gov. Mike Parson.

Mark McCloskey compared himself to Rittenhouse in a statement Tuesday, saying they have both been prosecuted and were defending themselves from an “angry mob.” McCloskey said he hopes the jury finds Rittenhouse not guilty.

Rittenhouse was 17 years old when he shot and killed two people and wounded a third during a violent night of protests that came in the wake of a white Kenosha police officer shooting Jacob Blake, a Black man. Rittenhouse and all three people he shot are white. Rittenhouse argues he acted in self defense. If convicted of the most serious charge, first-degree intentional homicide, he could spend the rest of his life in prison.

McCloskey on Tuesday was photographed standing next to two men flashing an “OK” sign, which is associated with white supremacists.

Rittenhouse was also photographed in January with two men as they made the “OK” sign with their hands. The judge in September ruled against allowing that to be discussed during Rittenhouse’s trial.

McCloskey announced in May that he was running for the Senate seat being vacated by the retiring Roy Blunt, a Republican. The large field includes Missouri Attorney General Eric Schmitt, Republican members of Congress Billy Long and Vicky Hartzler, and former Gov. Eric Greitens, who resigned from office amid a sex scandal in 2018. 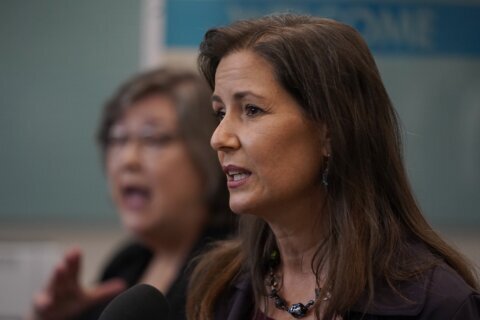 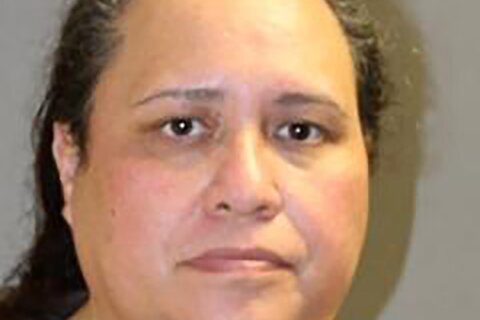