The man known as the "QAnon Shaman," who stormed the Senate chamber on January 6 adorned in face paint and wearing a fur helmet with horns, was sentenced to 41 months behind bars on Wednesday for his involvement in the attack on the Capitol.
Listen now to WTOP News WTOP.com | Alexa | Google Home | WTOP App | 103.5 FM
download audio
NBC4 Investigative Reporter Scott MacFarlane tells WTOP the sentencing of “Q-Anon Shaman” could affect many other Jan. 6th cases

Washington — The man known as the “QAnon Shaman,” who stormed the Senate chamber on January 6 adorned in face paint and wearing a fur helmet with horns, was sentenced to 41 months behind bars on Wednesday for his involvement in the attack on the Capitol.

Jacob Chansley, 34, from Phoenix, Arizona, pleaded guilty in September to one felony count of obstruction for his role in trying to block the counting of the 2020 Electoral College votes. He faced a maximum of 20 years in prison on the charge, but federal prosecutors sought a sentence of 51 months, the longest requested sentence in a January 6 investigation to date.

U.S. District Judge Royce Lamberth handed down the 41-month sentence in the U.S. District Court for the District of Columbia on Wednesday. He also sentenced Chansley to three years probation once he’s released.

In sentencing Chansley to prison time, Lamberth said he thought Chansley was “genuine in your remorse” but said the severity of his crime warranted the sentence.

“What you did here was horrific, as you can now see,” the judge said.

Images of a shirtless, American flag-carrying Chansley entering the halls of Congress and sitting in the Senate president’s chair became iconic representations of the mayhem of January 6, when hundreds of pro-Trump rioters stormed the building and briefly delayed the formal counting of the electoral votes. 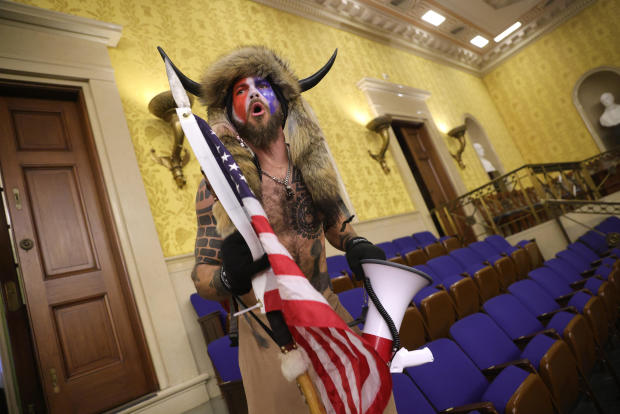 Jacob Chansley, known as the “QAnon Shaman,” screams “Freedom” inside the Senate chamber after the U.S. Capitol was breached by a mob during a joint session of Congress on January 6, 2021.

Multiple videos and pictures showed the defendant inside and outside the Capitol building, yelling at officers and leading a mob down the halls of the Capitol. He made his way into the Senate chamber, where he scrawled, “It’s Only A Matter of Time. Justice Is Coming,” on paper covering the desk where Vice President Mike Pence had been presiding over the Senate just minutes before, investigators said.

Chansley appeared in court Wednesday sporting a beard and wearing a green prison jumpsuit. In his lengthy address to the court, in which he referenced Jesus, Gandhi and the movie “The Shawshank Redemption,” Chansley expressed remorse for his actions, saying he “would do everything differently.”

“I was wrong for entering the Capitol. I have no excuse,” he told Lamberth. “The behavior is indefensible.”

Chansley asked the judge to sentence him to a time-served prison penalty, meaning he would get full credit for the time he has already spent behind bars.

“I am in no way shape or form a dangerous criminal. I am not a violent man. I am not an insurrectionist. I am certainly not a domestic terrorist,” Chansley said. “I am nothing like these criminals that I have been incarcerated with.” 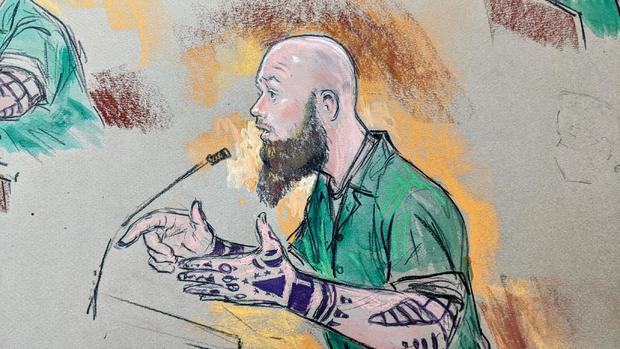 Jacob Chansley speaks in court during his sentencing hearing in Washington, D.C., on Wednesday, November 17, 2021.

At the sentencing hearing, prosecutors showed the court profanity-laced videos of Chansley’s participation in the riot and specifically addressed the letter he left on Pence’s desk inside the Senate chamber.

“Those words hit differently knowing he is not across the country,” Assistant U.S. Attorney Kimberly Paschall said. “[Chansley] is feet away from the object of his contempt, his hatred … This note is a threat.”

Characterizing the defendant as the “flagbearer of the January 6 Capitol riot events,” Paschall asked Lamberth to send a message to other rioters through his sentencing of Chansley.

“Don’t think the justice system will sit idly by when you attempt to end that peaceful transfer of power,” she said.

Watkins blamed Chansley’s presence at the Capitol in part on the fact the one-time sailor on the U.S.S. Kitty Hawk did not receive proper mental health treatment following a 2006 diagnosis by Navy doctors, alleging the Navy did not notify him of his mental condition at the time. Chansley was honorably discharged from the Navy in 2007.

Watkins acknowledged the defendant’s presence in the Capitol and the violence of that day, but asked the court to separate the totality of the events from his specific actions.

“This isn’t a case about Trump,” Watkins said. “This is about culpability.”

The day after the riot, on January 7, Chansley voluntarily called the FBI and admitted to his role in the attack, surrendering two days later. He was originally charged in a six-count indictment that included civil disorder, violent entry, and disorderly conduct before agreeing to plead guilty to the single charge of obstruction in September. Chansley has been jailed in Washington, D.C., and Virginia since his arrest.

Since then, his attorney says the self-described Shaman has disavowed the QAnon conspiracy theory and sought to distance himself from former President Donald Trump, after unsuccessfully petitioning him for a presidential pardon. Watkins described Chansley in court Wednesday as “a new man.”

“There is no question his views have evolved,” Lamberth agreed.

Prosecutors to begin case against Jussie Smollett in Chicago