JACKSON, Miss. (AP) — Leaders of a northern Mississippi city were motivated by anti-Muslim prejudice when they rejected a zoning request for what would be the first mosque in the area, according to a federal lawsuit filed Wednesday.

American Civil Liberties Union of Mississippi sued on behalf of the two Muslim men who want to build the mosque, Abraham House of God, in the city of Horn Lake.

Earlier this year, the Horn Lake planning commission recommended that the site plan for the mosque be denied, and the Board of Aldermen voted 5-1 in April to uphold that recommendation. Aldermen said they denied the application because of concerns about insufficient water supply for fire sprinklers and the possibility of traffic and noise.

“Despite the pretextual excuses for their decision, Board members did not work very hard to hide the true reason they denied approval for the project — anti-Muslim prejudice,” said the lawsuit, which represents one side of a legal argument. “As then-Alderman John E. Jones Jr. told the local newspaper: ‘I don’t care what they say, their religion says they can lie or do anything to the Jews or gentiles because we’re not Muslims.’”

The Associated Press left a phone message Wednesday for Horn Lake Mayor Allen Latimer at his City Hall office, seeking comment about the lawsuit. He did not respond after several hours.

The lawsuit argues the government officials violated the First Amendment rights of the men who want to develop the mosque, Maher Abuirshaid and Riyadh Elkhayyat. It also argues that city officials violated a federal law that gives heightened legal protections in land-use decisions to people groups that face discrimination. The lawsuit asks a judge to nullify the Horn Lake officials’ decisions and to order the city to grant the land-use request for the mosque.

Horn Lake is in DeSoto County, which is just south of Memphis, Tennessee. Abuirshaid and Elkhayyat are DeSoto County residents and want to develop a mosque so their families and other Muslim families in DeSoto County will have a place to worship without having to drive a half-hour or more to Memphis.

“A local mosque is critical for my family and the Muslim community in DeSoto County to practice our religion,” Abuirshaid said in a news release.

Numerous residents near the potential mosque site spoke against the project during a city planning meeting in February.

The mosque is intended to be a 10,000-square-foot (929-square-meter) building with a worship space that holds 156. It would have 44 parking spaces. Elkhayyat, who sometimes goes by the name Ray Elk, told Horn Lake aldermen that the building would not have outside loudspeakers to issue calls to prayer. He also said the mosque would have significantly less traffic than if he developed the site into a subdivision.

“The freedom to worship is one of our most fundamental rights,” Heather Weaver, senior staff attorney for the ACLU Program on Freedom of Religion and Belief, said in the news release. “By discriminating against our clients simply because they are Muslim, Horn Lake officials violated that right, and they must be held accountable.” 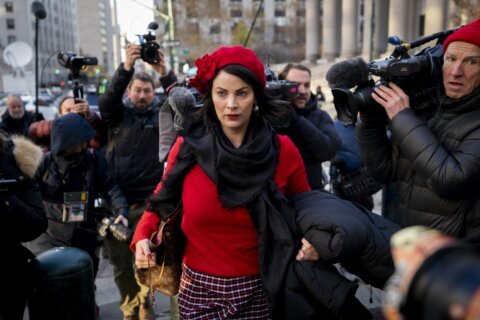