Henry Montgomery, at center of juvenile life debate, is free

BATON ROUGE, La. (AP) — The Louisiana inmate whose Supreme Court case was instrumental in extending the possibility of freedom to hundreds of people sentenced to life in prison without the opportunity for parole when they were juveniles was freed on parole Wednesday after spending nearly six decades behind bars.

Henry Montgomery, 75, was released from prison just hours after the parole board’s decision and went to the offices of the Louisiana Parole Project, a nonprofit which is supporting him after his release. There he was embraced by tearful staff and former juvenile lifers who were freed as a result of the court case that bears Montgomery’s name.

“It feels so wonderful,” said Montgomery during an interview with The Associated Press. When asked what he plans to do now that he is out of prison, Montgomery said he wanted to pay his respects to his mother and grandmother and other family members who died when he was behind bars.

Montgomery had been convicted in the 1963 killing of East Baton Rouge sheriff’s deputy Charles Hurt, who caught him skipping school. Montgomery was 17 at the time. He was initially sentenced to death but the state’s Supreme Court threw out his conviction in 1966, saying he didn’t get a fair trial. The case was retried, Montgomery convicted again but this time sentenced to life in prison without the possibility of parole. He served decades at the Louisiana State Penitentiary at Angola.

A three-member board voted unanimously in favor of parole. Due to the coronavirus pandemic, the meeting was held on Zoom with Montgomery appearing on camera at Angola.

“He’s been in prison for 57 years. He has an excellent … disciplinary record. He is a low risk by our assessment. He’s got good comments from the warden,” said board member Tony Marabella as he voted to approve Montgomery’s release with certain conditions including a curfew and that he have no contact with the victim’s family.

Montgomery’s release owes back to two specific Supreme Court cases. In 2012, the Supreme Court ruled in Miller v. Alabama that mandatory sentencing of life without parole for juvenile offenders was “cruel and unusual” punishment. But it didn’t settle the question of whether that decision applied retroactively or only to cases going forward.

In 2016, the Supreme Court settled the matter when it took up Montgomery’s case and extended their decision on such sentences to people already in prison.

The decision ushered in a wave of new sentences and releases. Since the court’s Montgomery decision, about 800 people who had been sentenced to life without parole as juveniles have been released, according to the Campaign for the Fair Sentencing of Youth. But, until Wednesday, Montgomery remained in prison.

After the Supreme Court decision, he was resentenced in 2017 to life with parole and the state judge who resentenced Montgomery called him a “model prisoner” who appears to be rehabilitated. But then the parole board rejected his application two times, the most recent rejection coming in 2019.

Andrew Hundley is a former juvenile lifer who was released due to the Montgomery decision and went on to found the Parole Project in 2016 to assist people who have served long prison sentences reenter society. He said many former juvenile lifers who were released and were able to go on with their lives felt a collective sense of guilt that Montgomery — whose case made their releases possible — was still behind bars. For juvenile lifers still incarcerated, his release carries a different message, Hundley said.

“For individuals who continue to be in prison, Henry gives them hope that they may be judged by who they are today and not the worst mistake they ever made,” Hundley said.

The Parole Project will help Montgomery with housing, signing up for health care or medications, getting an ID card and learning how to navigate society. The reentry started with a cheeseburger, fries and an orange soda — his first meal out of prison — and his first cellphone which staff members said they would help him set up.

Montgomery also noted the huge changes that had taken place in Baton Rouge since he was incarcerated — freeways that didn’t exist decades ago, for example — and said he didn’t even recognize some places.

Shon Williams was on hand Wednesday to welcome Montgomery. He was a former juvenile lifer who served time in Angola with Montgomery. He recalled Montgomery taking a sign language class in prison that Williams taught despite his arthritis and Montgomery giving him advice in prison to “never give up.” Williams said he was holding back tears watching Montgomery on Wednesday.

“If it wasn’t for him I’d still be in Angola,” Williams said.

During the hearing, Hundley and others spoke of what Montgomery had accomplished in prison including his years of work at the prison’s silk screen shop and the length of his stay. He was also instrumental in establishing a boxing team.

His release was not without opposition. Hurt, the sheriff’s deputy who Montgomery killed, was married and had three children. Two of his daughters have met with Montgomery in prison and forgiven him, but family members have opposed his release. A prosecutor from the area where Montgomery’s crime occurred spoke against his parole as did one of the deputy’s daughters, Linda Hurt Woods.

“I do not believe that he should be released at this time,” said Woods, saying that the decision shows deep disrespect to law enforcement officers. “He made a decision at 17 years old. You know right from wrong at 17. I did.”

Montgomery himself said little during the roughly half-hour hearing. He is extremely hard of hearing, and his lawyer often had to repeat questions from the board members. At times Montgomery said he was struggling to find words to express himself.

“I’m really sorry that I, that this happened,” Montgomery said. “I am going to have to live with this all my life, the rest of my life.” Speaking later to the AP he said: “I destroyed my life, they life and the people that I hurt,” referring to his own family and that of the slain deputy’s. 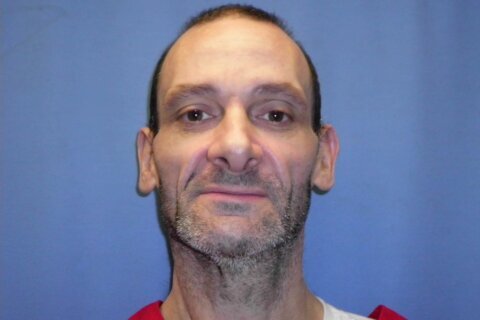