The Biden administration on Thursday sued Texas over new voting laws that outlasted a summer of dramatic protests by Democrats, who face fading hopes of overhauling the nation's elections in response to a wave of restrictive new rules in Republican-led states.
Listen now to WTOP News WTOP.com | Alexa | Google Home | WTOP App | 103.5 FM

AUSTIN, Texas (AP) — The Biden administration on Thursday sued Texas over new election laws that outlasted a summer of dramatic protests by Democrats, who remain unable in Congress to pass legislation they say is needed to counteract a year of Republicans adding restrictive voting measures nationwide.

The lawsuit does not go after the entirety of a sweeping bill signed in September by Republican Gov. Greg Abbott in Texas, which already has some of the nation’s toughest voting rules. Instead, the challenge filed in a San Antonio federal court targets provisions surrounding mail-in voting requirements and voter assistance, which the Justice Department argues violate federal civil rights protections.

It now puts two of the Texas GOP’s biggest conservative victories this year in court against the federal government, as the Justice Department is simultaneously trying to stop a new Texas law that has banned most abortions since September.

“Our democracy depends on the right of eligible voters to cast a ballot and to have that ballot counted,” Attorney General Merrick Garland said. ”The Justice Department will continue to use all the authorities at its disposal to protect this fundamental pillar of our society.”

Georgia’s new voting laws also drew a lawsuit this summer from the Biden administration, which is under pressure from the Democratic base to take greater action on voting rights, a top priority for the party ahead of the 2022 midterm elections. But time is running out and Senate Republicans have repeatedly blocked federal legislation to change election laws, including another attempt Wednesday.

Opponents of the Texas law known as Senate Bill 1 had already sued the state, accusing Republicans of setting out to disenfranchise minorities and other Democratic-leaning voters. The bill specifically targets Democratic strongholds, and was followed by Abbott weeks later signing new voting maps that fortify the GOP’s slipping dominance amid the state’s explosive growth.

Abbott and other Texas Republicans say the changes provide safeguards against voter fraud, which is rare.

“Biden is coming after Texas for SB1, our recently enacted election integrity law,” Republican Texas Attorney General Ken Paxton tweeted. “It’s a great and a much-needed bill. Ensuring Texas has safe, secure, and transparent elections is a top priority of mine. I will see you in court, Biden!”

Under the new Texas law, people assisting voters who need help completing their ballot must take a longer oath that now includes acknowledging a penalty of perjury. It also removes old language about answering voters’ questions, which opponents say will harm voters with disabilities.

Mail-in ballots must also now include a driver’s license number or the last four digits of a Social Security number, which the Justice Department says raises the chances of ballots being wrongly rejected and excluding some eligible voters.

The law also bans 24-hour polling locations and drive-thru voting, which are not contested in the Justice Department’s lawsuit.

The legislation in Texas set off a summer of walkouts by Democrats, for which Republicans threatened them with arrest, and Abbott vetoed the paychecks of thousands of rank-and-file staffers when the bill failed to reach him sooner. At one point, more than 50 Democratic lawmakers decamped to Washington, bringing the Texas Capitol to a grinding halt for 38 days.

Texas Democrats had hoped the gambit would pressure Congress into passing new voting rights protections at the federal level, but those efforts have repeatedly stalled. GOP senators oppose the Democratic voting bills as a “power grab.”

Texas is among at least 18 states that have enacted new voting restrictions since the 2020 election, according to the Brennan Center for Justice. The laws are part of a national GOP campaign, including in Florida, Georgia and Arizona, to tighten voting laws in the name of security, partly driven by former President Donald Trump’s false claims that the election was stolen.

Trump has called on Abbott to audit the election results in Texas, even though he won the state. Last month, Abbott appointed a new state elections chief, attorney John Scott, who briefly joined Trump’s legal team last year as it challenged the 2020 results.

Abbott tweeted “bring it” in response to the lawsuit, saying the new rules are legal. Democrats, meanwhile, welcomed the challenge.

“Texas leaders must be held accountable for their blatant abuse of power in a shameless attempt to keep themselves in power,” said Gilberto Hinojosa, chairman of the Texas Democratic Party. 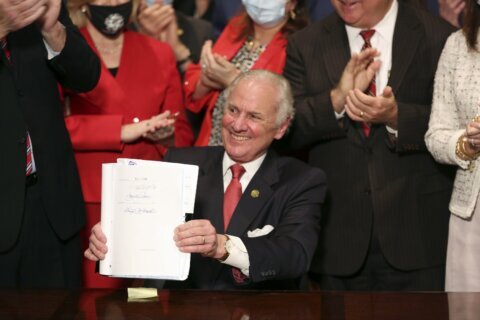