NEW YORK (AP) — A Rudy Giuliani associate facing trial next week in New York City for allegedly making illegal campaign contributions to U.S. politicians is too poor to pay for his own lodging and transportation, a judge ruled Monday.

Judge J. Paul Oetken ordered taxpayers to pick up the tab for Lev Parnas’ hotel room and put the U.S. Marshals Service on the hook for getting him to New York in time for the Oct. 12 trial. A final pretrial conference is scheduled for Tuesday.

Parnas, a Soviet-born Florida businessman, and Ukraine-born investor Andrey Kukushkin are accused of a scheme to make illegal campaign donations to local and federal politicians in New York, Nevada and other states in an effort to win support for a new recreational marijuana business.

Parnas and another Soviet-born Florida businessman, Igor Fruman, worked with Giuliani in an attempt to convince Ukraine to open an investigation into President Joe Biden’s son, Hunter, over his connection to a Ukrainian energy company.

Giuliani has said he had no knowledge of illegal campaign contributions but acknowledged working extensively with Fruman and Parnas as he sought damaging information on Biden.

A message seeking comment was left with Parnas’ lawyer.

Oetken said his ruling on Parnas’ indigence was in response to a letter from his lawyer stating he could no longer pay the costs of his defense. Parnas didn’t ask for new lawyers, but did request funding for his travel and lodging during the trial.

Oetken said he found that the “interests of justice would be served” by having taxpayers pick up the tab for those expenses.

The judge said Parnas’ hotel costs will be reimbursed at the government’s per diem rate, which is $286 per night through the end of the year, according to the U.S. General Services Administration.

Another Giuliani associate, Igor Fruman, pleaded guilty last month to a charge that he solicited $1 million in contributions from a foreign national as part of the alleged campaign contribution scheme. Fruman’s plea agreement did not require him to cooperate in other cases, such as the case against Parnas.

While prosecutors have kept the identity of the foreign donor secret, a lawyer identified him during a court hearing as Russian businessman Andrei Muraviev. 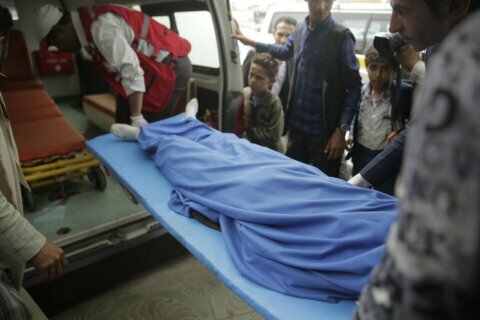 Motorcyclist dies, hit by a trooper and run over by a truck