Cody Bellinger hit a tiebreaking single in the ninth inning and prized midseason acquisition Max Scherzer came out of the bullpen for his first career save, sending the Los Angeles Dodgers past the San Francisco Giants 2-1 in a thrilling winner-take-all Game 5 on Thursday night and into the NL Championship Series.
Listen now to WTOP News WTOP.com | Alexa | Google Home | WTOP App | 103.5 FM
(1/20) 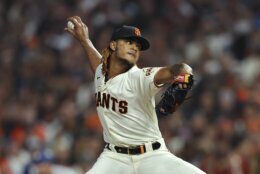 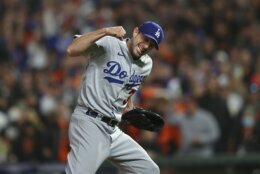 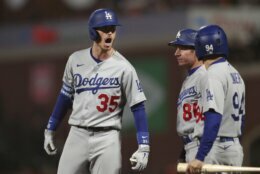 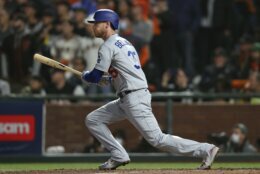 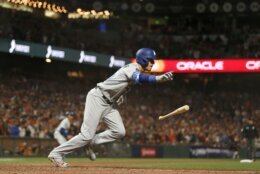 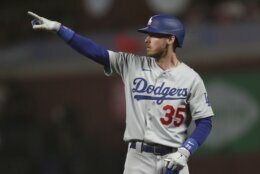 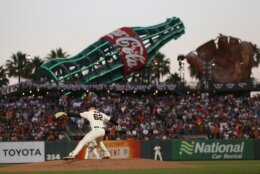 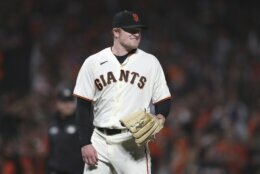 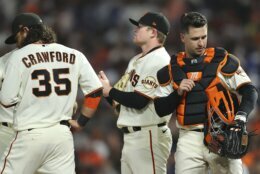 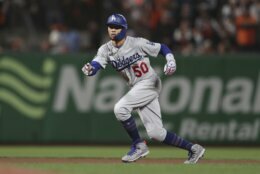 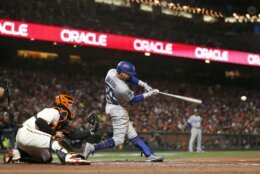 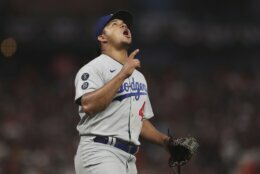 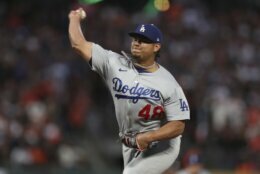 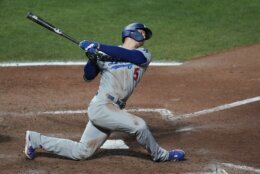 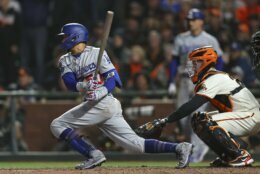 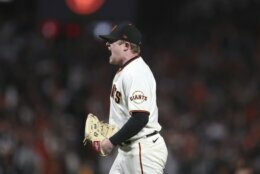 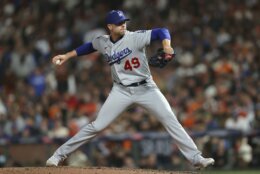 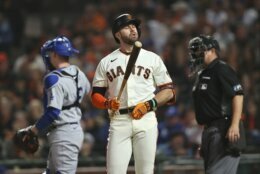 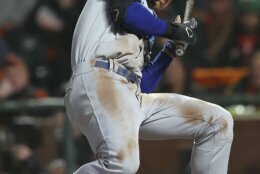 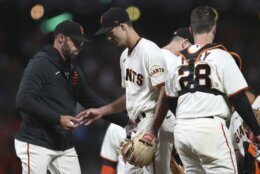 SAN FRANCISCO (AP) — Cody Bellinger pointed at the dugout and pounded his chest in triumph after delivering the biggest hit this season for the defending World Series champions.

Of course, it took until the ninth inning of the 24th and final meeting to finally separate the Los Angeles Dodgers and San Francisco Giants.

They couldn’t have been any closer.

Bellinger hit a tiebreaking single in the ninth and prized midseason acquisition Max Scherzer came out of the bullpen for his first career save, sending the Dodgers past the Giants 2-1 in a thrilling winner-take-all Game 5 on Thursday night and into the NL Championship Series.

Bellinger’s line drive up the middle decided a scintillating Division Series between the top two teams in baseball with a combined 213 regular-season wins, adding a new chapter to this storied, century-old rivalry.

“We poured everything we could into this series and it took everything we had to beat these guys,” Dodgers manager Dave Roberts said.

The dramatic finish came with a disputed call: With a runner aboard, Scherzer fanned Wilmer Flores on a check-swing for the final out. Plate umpire Doug Eddings checked with first base ump Gabe Morales, who ruled Flores swung. But on television replays, it certainly appeared he held up.

The Dodgers rushed out of their dugout to celebrate on the Giants’ home field. Fans began throwing beer cans and debris onto the diamond in disgust.

“Super tough. Obviously, you don’t want a game to end that way,” San Francisco manager Gabe Kapler said. “There’s no need to be angry about that. I just think it’s a disappointing way to end. There are other reasons we didn’t win today’s baseball game, so that was just the last call of the game.”

Morales told a pool reporter that check-swings are one of the most difficult calls umpires have.

“I don’t have the benefit of multiple camera angles when I’m watching it live,” Morales said. “When it happened live I thought he went, so that’s why I called it a swing.”

Mookie Betts had a postseason career-high four hits and will lead the next step in the Dodgers’ title defense at Atlanta for Game 1 of the best-of-seven NLCS on Saturday night. Roberts expects Scherzer to be ready to start, saying, “that’s the plan.”

Los Angeles came back from a 3-1 series deficit to beat the Braves in last year’s NLCS, taking Game 7 by a 4-3 score on the way to its first championship since 1988.

“It’s going to be another good one. It’s not going to be easy,” Bellinger said. “We played each other a few times the last few years. So we kind of know what each other’s got, and really looking forward to it.”

Camilo Doval plunked Justin Turner with one out in the ninth and Gavin Lux singled before Bellinger came through with his most meaningful hit in a difficult season.

“You really do want to be in that moment,” Bellinger said.

Scherzer, who lost his Game 3 start 1-0, came over from Washington at the July 30 trade deadline. He pitched a hitless ninth Thursday on two days’ rest to close out a best-of-five series certain to go down among the classics these franchises have played — right up there with the three-game tiebreakers won by the Giants to take NL pennants in 1951 and 1962.

“That was crazy. That’s nuts,” Scherzer said. “So to be in that moment, with everything on the line, with the way we’ve been playing this whole series, to get the ball in that situation, man, that was a rush.”

The 37-year-old right-hander is the oldest pitcher to save a winner-take-all game since saves became an official stat in 1969.

In the final meeting between these so evenly matched rivals who knew everything about each other by this stage, it was only fitting they split at 12 apiece. The 107-win Giants edged the Dodgers for the NL West title on the final day, Los Angeles winding up a game back with 106 victories.

Both teams went into this game with 109 wins, including the playoffs.

“Best record in all of baseball and it was just great every time we played those guys, just bringing that rivalry back to life, really playing for relevance,” Roberts said.

The Dodgers already won once when facing elimination, topping the Cardinals last week in the wild-card game 3-1. And Roberts’ bold Game 5 gamble paid off: 20-game winner Julio Urías pitched out of the bullpen instead of starting as originally planned. Urías entered in the third inning and gave LA four innings of relief with five strikeouts.

Betts had the Dodgers’ initial three hits with singles at the top of the lineup before Corey Seager’s RBI double in the sixth as the Dodgers finally got to Game 1 winner Logan Webb.

“He’s one of the best players in baseball for a reason,” Webb said.

Darin Ruf’s first hit of the series for San Francisco after starting 0 for 9 was a tying home run in the bottom half. The 452-foot drive was the longest of this postseason.

Webb was done after seven more brilliant innings, allowing one run on four hits, striking out seven and walking one as he once more delighted a sellout crowd of 42,275 with their swirling orange rally towels and those deafening “Beat LA!” chants.

The 24-year-old right-hander and two relievers shut out the Dodgers 4-0 here last Friday, and Webb’s Sierra Elementary School to the north in Rocklin held a day in his honor this week.

Right-handed reliever Corey Knebel opened for the Dodgers and gave up Buster Posey’s two-out double in the first, then pumped his fist striking out Brandon Crawford in a seven-pitch at-bat.

The Dodgers made all the adjustments and winning moves this time.

“Sometimes there’s things that you can’t really explain. It’s kind of like that `it’ thing,” Betts said. “I feel like we have it.”

Betts is only the second batter with three hits in a game against Webb this year, joining San Diego’s Eric Hosmer on April 30.

The right fielder also became the first player in Dodgers history with four hits in a winner-take-all postseason game.

Hall of Fame broadcaster Vin Scully, who retired following the 2016 season after 67 years calling Dodgers games, weighed in on the magnitude of this Game 5 matchup in the clubs’ storied history.

“To my knowledge, tonight’s game between the (at)Dodgers and (at)SFGiants is the most important game in the history of their rivalry. With nearly identical records, and so much at stake, I believe this to be the case,” Scully posted on Twitter. “Many of you might consider the 1951 game for the NL pennant to be bigger. Perhaps, but that was more about the greatest moment with Bobby Thomson’s game-winning home run.”

Roberts was told before the game of the 93-year-old Scully’s remarks.

“Now I feel pressure. Gosh darn it, man,” Roberts said with a grin.

Chris Cuomo was accused of harassment days before CNN firing

Third party to probe Oxford High’s actions ahead of shooting