AP PHOTOS: Across faiths and borders, the faces of prayer

Blue sky and wispy clouds framed the outline of an ultra-Orthodox man of the Kiryat Sanz Hasidic sect on a hill in Israel during a Tashlich ceremony, in which Jews symbolically cast off their sins into a body of water, ahead of the Yom Kippur holiday.

Tibetan exiles in India threw fistfuls of barley flour into the air at an early morning gathering, chanting through face masks worn to guard against the coronavirus.

Eyes closed in rapture, a Haitian migrant pressed a paperback bible to the crown of her head during a Mass at an improvised shelter in the Mexico-U.S. border region where thousands of her compatriots recently arrived hoping to cross.

Images captured by Associated Press photographers around the world last month showed how prayer has diverse manifestations across faith traditions and human-drawn frontiers.

In Cuba it took the face of a young girl kneeling in church before flickering candles for the country’s patron, the Virgin of Charity of Cobre, whose customary feast day procession was scrapped for a second year due to the pandemic.

In Lebanon it was Muslim men standing shoulder-to-shoulder with heads bowed over prayer rugs at a gas station, where they demonstrated against severe fuel shortages amid a crippling economic crisis.

And in India, a woman clasped her hands to her face and bent in veneration before a cow, considered holy by Hindus, during the Teej festival marked by daylong fasting by women asking to find a good husband or for the longevity of an existing one.

Prayer was a central part of many observances of the 20th anniversary of the 9/11 attacks in the United States, such as in Chicago, where uniformed firefighters standing in formation bowed their heads in solemn ceremony.

And at ground zero in New York, workers installed thin panels of marble on the dome of a rebuilt Greek Orthodox church, the only house of worship destroyed in the attacks, in preparation for a lighting and memorial service held days later, on the eve of the anniversary.

These and more are among the AP’s top faith-related images from the month. 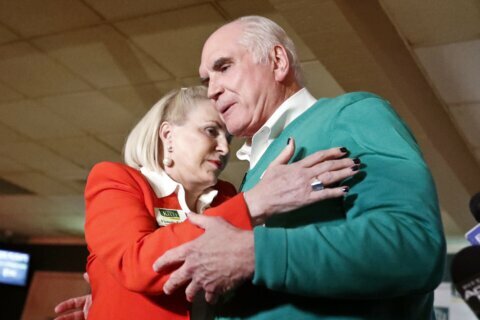