NEW ORLEANS (AP) — The body of a Louisiana state trooper who was shot to death in an ambush early Saturday was not discovered until 5 p.m. that day, the state police superintendent said Monday.

Master Trooper Adam Gaubert was killed while he was in a parked patrol unit in Ascension Parish after working a traffic crash, Superintendent Lamar Davis said during a livestreamed news conference in Baton Rouge. He was one of two people killed in a series of shootings attributed to one man, Matthew Mire, 31, who was captured late Saturday.

An all-out effort to capture Mire — and a policy of using radio communications for emergency messages only during such times — may be part of the reason Gaubert’s death went unnoticed. Under ordinary circumstances, Gaubert’s failure to give routine notice that he was going off duty would have been noted.

The exact time of Gaubert’s death has not been determined, but Davis said camera footage obtained by investigators shows a truck police say was stolen by Mire entering the area where Gaubert was parked about 2:30 a.m., more than 14 hours before the body was discovered.

The string of shootings that killed Gaubert and one other person is believed to have started in Livingston Parish about midnight Friday. Mire is suspected of shooting and wounding two people there before stealing a pickup truck.

Based on surveillance video, Davis said, Mire is believed to have entered the area where Gaubert was parked about 2:30 a.m. Saturday. Gaubert was not involved in the response to the Livingston shooting and is thought to have been finishing up a traffic crash report at the time.

Davis said police believe Mire went to the area to prepare for another attack in which a woman was killed and a man was wounded. The slain woman was identified as Pamela Adair, 37, according to the Ascension Parish Sheriff’s Office. Motives for all of the shootings remain unclear.

Mire exchanged gunfire with another state trooper who spotted the stolen truck about 5 a.m. Saturday, Davis said. He was captured Saturday night after a manhunt involving multiple agencies. State police posted on Facebook page that Mire was taken to jail in Baton Rouge in handcuffs that had belonged to the slain trooper after being treated at a hospital for a suspected self-inflicted gunshot wound to his leg. He faced multiple charges in multiple jurisdictions, including murder of a police officer.

“The time between the murder of Master Trooper Gaubert and the time he was found is absolutely unacceptable. And the results of this chaotic situation contributed to just that,” said an emotional Davis, who called Gaubert a friend and highly respected trooper. He said efforts to improve procedures are already underway.

“We are learning from this experience, we’re getting better,” he said. 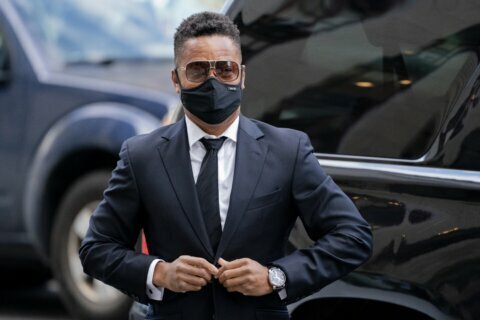