SOUTH LAKE TAHOE, Calif. (AP) — The huge wildfire near the Lake Tahoe resort region was about half contained Tuesday, with the head of California’s firefighting agency saying crews largely have been able to keep flames away from populated areas.

“We’ve been able to herd these fires around and outside of the main community corridors,” California Department of Forestry and Fire Protection Chief Thom Porter said.

That includes the city of South Lake Tahoe and nearby Meyers that were threatened by the Caldor Fire as it churned east, and the communities of Pollock Pines and nearby Sly Park near where the fire ignited 3 1/2 weeks ago.

“Unfortunately, that hasn’t happened in every case,” Porter said at a briefing. “But by and large, we’ve been able to do a great job in protecting lives, property.”

Nearly 1,000 structures have been destroyed in the fire near Lake Tahoe on the California-Nevada border, including 776 homes. Many were in the community of Grizzly Flats near where the fire started and was able to burn before officials could divert significant resources from other blazes scorching California.

Others include the Dixie Fire, the second-largest in the state’s recorded history, which also has burned through rural, forested communities that firefighters were unable to protect.

The perimeter of that fire, which is farther north in the Sierra Nevada, has grown to 800 miles (1,300 kilometers), said Tony Scardina, the U.S. Forest Service’s deputy regional forester for California.

The Dixie Fire was 59% contained. It began in mid-July and has destroyed more than 1,200 buildings, including 688 homes.

“We are on par with where we were last year. That’s sobering, and that is the new reality,” the Cal Fire chief said.

California has experienced increasingly larger and deadlier wildfires in recent years as climate change has made the U.S. West much warmer and drier over the past 30 years. Scientists have said weather will continue to be more extreme and wildfires more frequent, destructive and unpredictable.

The entire state showing the potential for extreme fire danger in the next three months, Porter said.

“We’re right smack in the middle of wildfire peak season,” he said. “And so everybody needs to remain vigilant.”

The Caldor Fire grew by just a few hundred acres over 24 hours, to just over 338 square miles (875 square kilometers), and containment lines were holding well, officials said at a briefing.

“We had very little challenging of the line anyplace on the fire,” said Tim Ernst, a Cal Fire operations section chief.

Some sections of the perimeter were a concern, but on much of the blaze, the work turned to mopping up, pulling miles of fire hose out of the forest and knocking down dangerously weakened trees.

The fire, which has grown explosively at times, was tamed enough to allow authorities to lift mandatory evacuation orders for the 22,000 residents of South Lake Tahoe on Sunday.

But Ryan Okashima, the California Highway Patrol’s assistant commissioner, urged residents to be cautious both in heeding evacuation warnings and when returning home.

The firefight was so intense that all eight available firefighting aircraft from the Air National Guard and the Air Force Reserve were called into service Sunday for the first time since 2012, said Maj. Gen. David Baldwin, who heads the California National Guard.

But with improving conditions, Baldwin said a couple hundred troops, four Guard helicopters and other equipment were pulled back.

The Caldor Fire broke out Aug. 14 on the western slope of the Sierra Nevada and gutted the community of Grizzly Flats as it roared up and over the crest of the mountain range to the eastern side, burning more homes and cabins along the way until it was prevented from reaching Lake Tahoe’s south shore.

The fire has been “one of the most impactful events that I think we’ve ever seen here,” said Mike Blankenheim, chief of the Amador-El Dorado unit of Cal Fire.

“The road back to some sense of normalcy for us is no doubt going to be long and no doubt going to have some challenges with it, but because of the efforts of this group here … that path has a solid anchor point and we have a direction to go with that right now,” Blankenheim told firefighters.

On Tuesday, more than 15,500 personnel were working on 14 active large wildfires in California. 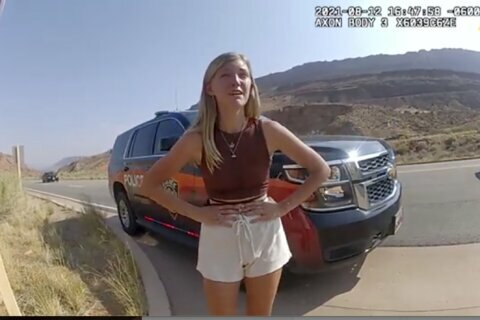 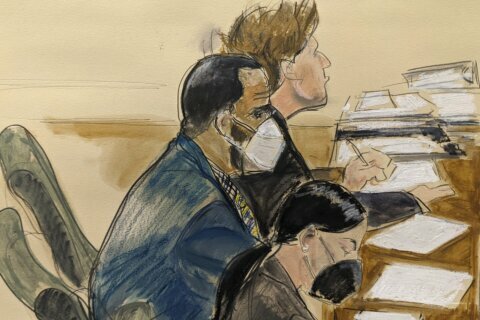