Tens of thousands of people who fled South Lake Tahoe in the teeth of a wildfire were returning home as crews finally managed to stall the advance of flames scant miles from the resort.
Listen now to WTOP News WTOP.com | Alexa | Google Home | WTOP App | 103.5 FM
(1/9) 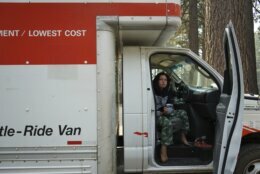 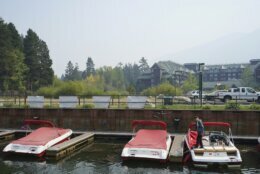 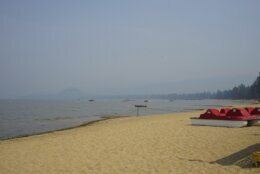 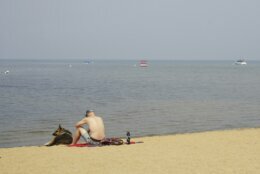 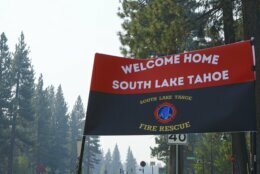 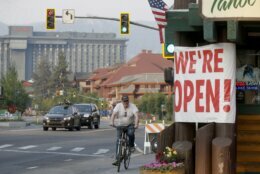 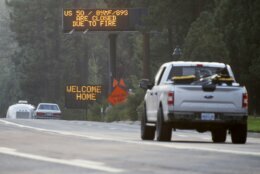 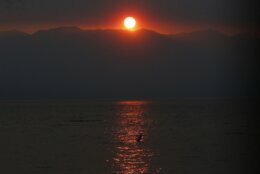 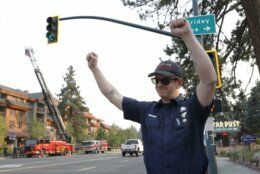 SOUTH LAKE TAHOE, Calif. (AP) — Connor Jones sunbathed with his dog on the otherwise empty beach at Ski Run Marina on Monday, as residents trickling back into town filled up their cars at a gas station behind him and employees of a water sports rental company docked jet skis and boats they had anchored away from the shores of Lake Tahoe to prevent them from igniting from wildfire.

He and others living in the resort city of South Lake Tahoe breathed a collective sigh of relief on Sunday when officials downgraded a mandatory evacuation order put in place a week ago to a warning.

“I figure they wouldn’t take repopulation lightly and, if they made the decision to allow people to come back, then they were probably confident that they’re not going to have any issues,” he said.

When the Caldor Fire gobbled up pine trees and crossed the Sierra Nevada last week, South Lake Tahoe, a scenic community of 22,000 people on the California-Nevada state line, transformed into a smoke-choked ghost town.

After worrying throughout all of last week about the fire approaching their homes and landmarks they hold dear, residents who returned on Monday said they were thankful firefighters had stopped the blazes on the town’s doorstep. But it appeared most residents remained away and most shops remained closed in usually thriving Labor Day destination town.

While many large wildfires have ripped through large swaths of Northern California in recent years, it’s the first time in more than a decade that South Lake Tahoe residents saw a blaze get this close. As of Monday evening, 5,072 firefighting personnel were battling the Caldor Fire, which had scorched roughly 338 square miles (876 square kilometers) and is 48% contained.

The threat to the region hasn’t entirely vanished, with mandatory evacuation orders remaining for parts of unincorporated El Dorado County south of South Lake Tahoe, including Meyers and Christmas Valley. And questions remain about the smoke blanketing the region and how long it may take for the clean air and crystalline waters that draw millions of tourists to the area annually to return.

Authorities warned residents, that in the absence of humans, bears had gone to town, spreading trash. “The delicate balance between humans and bears has been upset,” and anyone who thinks a bear may have entered their home should call law enforcement, El Dorado County Sheriff’s Sgt. Simon Brown said.

Chirawat Mekrakseree said he had seen signs. of bears sifting through the trash at his restaurant on Lake Tahoe Boulevard, My Thai Cuisine.

Mekrakseree plans to reopen and start serving curries and noodle dishes on Wednesday but worries the tourists he depends on may not come back while the smoke lingers. And he doesn’t know what to tell his staff about when business will return to normal after an already uncertain year with the pandemic, he said.

“Everybody has expenses, rent, car payments,” he said as he power-washed ash off outdoor picnic tables. “They’re asking me how long (until they return to work) and I can’t tell them how long.”

California and much of the U.S. West have experienced dozens of wildfires in the past two months as the drought-stricken region swelters under hot, dry weather and winds drives flames through bone-dry vegetation. More than 14,500 firefighters were battling 14 active fires in the state on Monday, and since the year began more than 7,000 wildfires have devoured 3,000 square miles (8,000 square kilometers).

The lifting of mandatory evacuation orders for the Tahoe area marked a milestone in the fight against the Caldor Fire, which erupted Aug. 14 and spread across nearly 338 square miles (876 square kilometers) of dense national parks and forests, tree-dotted granite cliffs and scattered cabins and hamlets in the northern Sierra Nevada. As of Monday, it is 48% contained. At its peak, the fire was burning as many as 1,000 acres an hour and virtually razed the small community of Grizzly Flats.

In recent days, winds eased and firefighters took advantage of the better weather to hack, burn and bulldoze fire lines, managing to contain 44% of the perimeter by Monday. Authorities said containment lines were holding up but they were concerned about extremely low humidity and a slight increase in wind, which could spur spot fires up to half a mile (0.8 kilometers) away.

“We are drier than I have seen on my 20 days on this fire,” Jim Dudley, incident meteorologist, said Monday. “There’s a lot of potential weather-wise for little things to become maybe not so little.”

Dakota Jones returned Monday to his apartment with his roommates, who were in the process of moving when the fire approached, and a U-Haul full of their belongings. The Lake Tahoe Community College student said he worried he’d find buildings damaged and ashen, and was pleasantly surprised to see the town largely untouched.

“I was honestly convinced this place was gonna go down,” said Jones, who is not related to Connor. “It was nice to see that I was wrong.”

California has experienced increasingly larger and deadlier wildfires in recent years as climate change has made the West much warmer and drier over the past 30 years. Scientists have said weather will continue to be more extreme and wildfires more frequent, destructive and unpredictable.

No deaths have been reported specifically from the fires, which have shut down all national forests in the state.

In Northern California, the weather is expected to cool slightly and the humidity to rise starting on Tuesday.

Taxin reported from Orange County. Metz is a corps member for the Associated Press/Report for America Statehouse News Initiative. Report for America is a nonprofit national service program that places journalists in local newsrooms to report on undercovered issues. 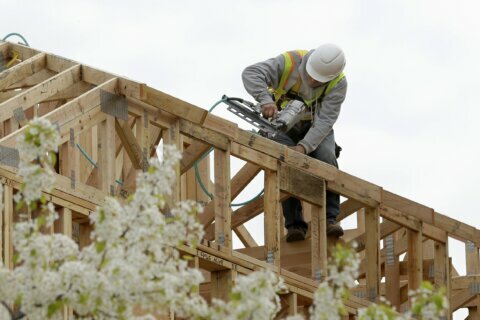